Posted by womanandhersphere in Suffrage Stories, Walks on October 22, 2012 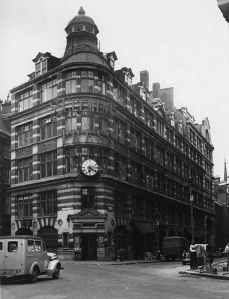 To mark the very welcome co-operation planned for the future between the Women’s Library and the London School of Economics the next few ‘Suffrage Stories’ will demonstrate the past importance to the women’s movement of streets and buildings in the vicinity of  Houghton Street.

In the last ‘Suffrage Story’ I described why and how, from the autumn of 1906, the Women’s Social and Political Union came to have its offices at Clement’s Inn, a few hundred yards from the London School of Economics which, since 1902, had taken up residence in premises in Clare Market and Houghton Street.

In the previous post I also mentioned that Frederick Pethick Lawrence had had some experience as a newspaper proprietor and editor. It was, therefore,  natural that he and his wife, Emmeline, should consider it useful for the suffrage society with which they were now so closely associated to have its own proselytizing organ. This would both broadcast the aims and actions of the WSPU  and serve as a point of focus for its swiftly expanding membership.

The first issue of ‘Votes for Women’

The first issue of Votes for Women, as the new paper was unequivocally named, appeared on 16 October  1907. It was financed and edited by Emmeline and Frederick Pethick Lawrence and published from the WSPU office at 4 Clement’s Inn.

The Pethick Lawrences had not had to look far for a printer for their new paper. Housed in ‘Newspaper Buildings’, at the junction of Clare Market and Portugal Street, opposite the end of Clement’s Inn Passage (now St Clement’s Lane), the late-19th-century bulk of  St Clement’s Press towered over the maze of narrow streets bounded by the Strand and the swathe of  Kingsway, still a raw building site.  The Press had begun business in 1889 and was to be printer to a variety of other organisations sympathetic to the suffrage cause – from 1909, for instance, responsible for the Anti-Vivisectionist Review.

Votes for Women was published monthly until April 1908, after which it took on a larger format and became a weekly. This increase in frequency and size was a direct reflection of the WSPU’s great success in attracting members and creating interest in its campaign. By early 1910 Votes for Women had a weekly print run of c. 30,000 copies.

The paper was sold in newsagents but also by members of the WSPU who were prepared to stand in the gutter (to stand on the pavement counted as obstruction) and sell it to passers by.  St Clement’s not only printed Votes for Women but also a variety of posters to advertise the paper – such as this one, held in the Women’s Library collection.

This arrangement continued for three and a half years until March 1912. At the beginning of that month WSPU members embarked on a dramatic window-smashing campaign, attacking shops and offices in London’s West End. As a result Emmeline Pankhurst and Frederick and Emmeline Pethick Lawrence were all arrested on the charge of conspiracy to commit criminal damage.  Christabel Pankhurst escaped from Clement’s Inn and fled to Paris. The first issue of Votes for Women to be issued after the arrests – the number for 8 March –  appeared with blanks in the text. There was a note on the front page:”The Editors who are responsible for “Votes for Women” in the absence of Mr and Mrs Pethick Lawrence beg to inform their readers that the blank spaces in this week’s issue do not represent lack of interesting matter for publication, but mark the suppression by the printers of articles, comments, and historical facts considered by them to be of an inflammatory nature.’

Whether it was because the temporary editors considered it impossible to continue working with a printer who felt unable to print all the material supplied, or whether  it was that St Clement’s Press declined to be associated with a publication that might bring them into direct conflict with the law – for whatever reason the 15 March 1912 and subsequent issues of Votes for Women were no longer printed by the St Clement’s Press but by Walbrook & Co of 14 & 15 Whitefriars Street, off Fleet Street.

After the Pethick Lawrences were ousted from the WSPU in the autumn of 1912 they retained ownership of Votes for Women, still printed by Walbrook,  making the paper the focus of their new organisation, the Votes for Women Fellowship.  I will discuss this organisation in a subsequent post. 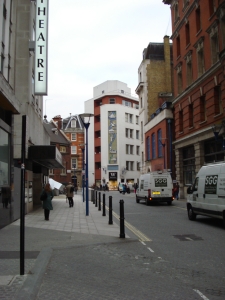 The Economists’ Bookshop, viewed from Kingsway

The site of the St Clement’s Press is now occupied by Waterstone’s Economists’ Bookshop, very much an LSE institution.