Posted by womanandhersphere in Collecting Suffrage on October 19, 2012

This is the ‘Holloway Brooch’ presented to members of the Women’s Social and Political Union who had undergone imprisonment. As such it is now a very desirable addition to any suffrage collection. If you are hoping to own one of your own, I have one for sale – see https://wp.me/p2AEiO-1CV 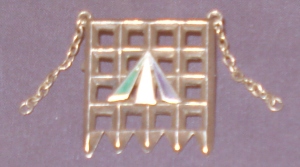 The first presentation of the brooches took place at a mass demonstration organised by the WSPU  in the Albert Hall on 29 April 1909. It was held to coincide with the meeting in London of the International Woman Suffrage Alliance. The presence on the platform of a large number of ex-WSPU prisoners and,to honour their sacrifice, the ceremonial presentation to them of the first ‘Holloway’ brooches was designed to make an international impression.

The brooch was designed by Sylvia Pankhurst. The portcullis symbol of the House of Commons, the gate and hanging chains are in silver, and the superimposed broad arrow (the convict symbol) is in purple, white and green enamel. Some of the brooches, but by no means all, are marked with dates of imprisonment.

The brooch was first mentioned in Votes for Women, the WSPU newspaper, in the issue of 16 April 1909, described as ‘the Victoria Cross of the Union’. However, in April 1909 WSPU prisoners had not yet begun using the hunger strike as a tool in their battle with the authorities. In recognition of that, which was considered the greater sacrifice, the WSPU instituted the hunger strike medal, the first of which was presented  four months later. 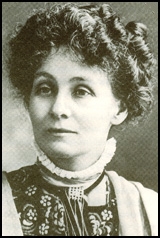 Mrs Pankhurst chose to be photographed wearing her ‘Holloway’ brooch in this photograph- as, 65 years later, did the elderly suffragettes, Leonora Cohen and Grace Roe . The latter two, like many other women, had received both of the WSPU accolades. 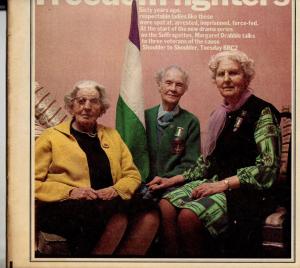 Posted by womanandhersphere in Kate Frye's suffrage diary on September 26, 2012

Another extract from Kate Frye’s manuscript diary. An edited edition of later entries (from 1911), recording her work as a suffrage organiser, is published as  Campaigning for the Vote: Kate Parry Frye’s suffrage diary. 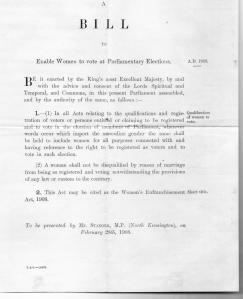 Kate’s MP, Henry Yorke Stanger, was the promoter of the current Enfranchisement Bill – the latest in the long line that stretched back through the latter half of the 19th century. Despite, as Kate describes, the bill passing its second reading, the government eventually refused to grant facilities to further the debate. However, that blow was yet to come as Kate records in these entries details of the suffrage meetings she attended in February and March 1908. She had the knack of always being present on the great occasions – and on 19 March was in the Albert Hall to witness the rousing – and profitable – reception given to Mrs Pankhurst on her release from prison.

Mrs Clara Rackham (1875-1966) was regarded as on the the NUWSS’s best speakers. In 1910 she became president of the NUWSS’s Eastern Federation, was founder of the Cambridge branch of the Women’s Co-operative Guild, and was sister-in-law to Arthur Rackham, the book illustrator.

Margery Corbett (1882-1981- later Dame Margery Corbett-Ashby) was the daughter of a Liberal MP. At this time she was secretary of the NUWSS.

Mrs Stanbury had been an organiser for NUWSS as far back as 1890s.

We got home at 5.15 and had tea. Then I did my hair and tidied myself and Agnes and I ate hot fish at 6.30 and left soon after in a downpour of rain for the Kensington Town Hall – we did get wet walking to the bus and afterwards. We got there at 7 o’clock to steward – the doors were opening at 7.30 and the meeting started at 8.15. I was stewarding in the hall downstairs and missed my bag – purse with 6/- and latch Key etc – very early in the evening which rather spoilt the evening for me as I felt sure it had been stolen. It was a South Kensington Committee of the London Society for Woman’s Suffrage and we were stewarding for Miss Cockle. It was a good meeting but not crowded but, then, what a night. Miss Bertha Mason in the Chair. The speech of the evening was Mrs Philip Snowdon, who was great, and Mrs Rackham, who spoke well. The men did not do after them and poor Mr Stanger seemed quite worn out and quoted so much poetry he made me laugh. Daddie had honoured us with his presence for a little time and had sat on the platform – so I feel he has quite committed himself now and will have no right to go back on us. We were not in till 12.20 and then sat some time over our supper.

Before I was up in the morning Mother came up in my room with my bag and purse and all quite safe. It had been found and the Hall Door Keeper had brought it. I was glad because of the Latch Key. Daddie generously had paid me the 6/- which I was able to return.

Mr Stanger’s Woman’s Suffrage Bill has passed the second reading. I had to wait to see the Standard before going to my [cooking] class. That is very exciting and wonderful – but of course we have got this far already in past history. Oh! I would have liked to have been there.

To 25 Victoria Street and went to the 1st Speakers Class of the N.[ational] S.[ociety] of W.[omen’s] S.[uffrage]. I was very late getting there and there was no one I knew so I did not take any part in the proceedings and felt very frightened. But Alexandra Wright came in at the end and I spoke to Miss Margery Corbett and our instructoress, Mrs Brownlow. And then I came home with Alexandra from St James’s Park station to Notting Hilll Gate.

Mother went to a Lecture for the NKWLA  [North Kensington Women’s Liberal Association] at the Club and Agnes and I started at 8 o’clock and walked to Mrs Haddesley [sic] for a drawing-room Suffrage Meeting at 8.30. Agnes and I stewarded and made ourselves generally useful. The Miss Porters were there and a girl who I saw at the Speakers’ Class on Wednesday. Alexandra was in the Chair and spoke beautifully – really she did. And Mrs Stanbury spoke. Mrs Corbett and Mrs George – all very good speakers. Mrs Stanbury was really great and there were a lot of questions and a lot of argument after, which made it exciting. It was a packed meeting but some of the people were stodgy. Miss Meade was there with a friend – her first appearance at anything of the kind she told us and she said it was all too much for her to take in all at once. The “class” girl walked with us to her home in HollandPark and we walked on home were not in till 11.45. I was awfully tired and glad of some supper and to get to bed.

Mrs Pankhurst had been arrested on 13 February as she led a deputation from the ‘Women’s Parliament’ in Caxton Hall to the House of Commons. She was released from her subsequent imprisonment on 19 March, going straight to the Albert Hall where the audience waiting to greet her donated £7000 to WSPU funds. Kate was there.

I had a letter in the morning from Miss Madge Porter offering me a seat at the Albert Hall for the evening and of course I was delighted….just before 7 o’clock I started for the Albert Hall. Walked to Notting Hill gate then took a bus. The meeting was not till 8 o’clock but Miss Porter had told me to be there by 7 o’clock. We had seats in the Balcony and it was a great strain to hear the speakers. It was a meeting of the National Women’s Social and Political Union – and Mrs Pankhurst, newly released from Prison with the other six was there, and she filled the chair that we had thought to see empty. It was an exciting meeting. The speakers were Miss Christabel Pankhurst, Mrs Pethick Lawrence, Miss Annie Kenney, Mrs Martel and the huge sums of money they collected. It was like magic the way it flowed in. It was all just a little too theatrical but very wonderful. Miss Annie Kenney interested me the most – she seems so “inspired” quite a second Joan of Arc. I was very pleased not to be missing so wonderful an evening and I think it very nice of Miss Porter to have thought of me. She is quite a nice girl of the modern but “girlie” sort – a Cheltenham girl and quite clever – but very like a lot of other girls. Coming out we met, strangely enough, Mrs Wright and Alexandra (Gladys was speaking at Peckham) and after saying good-bye to Miss Porter I walked home with them as far as Linden Gardens. Got in at 11.30 very tired indeed and glad of my supper. Mother was waiting up.