21 November 2018 marked the 100th anniversary of the passing of the Parliament (Qualification of Women) Act, by which women were for the first time able to stand for election as members of Parliament.

It was only earlier in the year, on 6 February, that some women (over 30 and fulfilling a small property qualification) had at long last been granted the parliamentary vote and now, as the Great War had come to an end, women actually had the prospect of sitting in the House of Commons.

The short bill, passing rapidly through all stages of the parliamentary process with little opposition, granted the right to stand for election to all women over the age of 21, although any woman of that age would have been unable to vote. A curious situation.

With a general election called for 14 December, there was little time for women to organize election campaigns, but in the event 17 women took to the hustings. Over the next couple of weeks I’ll tell you something about each one of these pioneers, taking them alphabetically.

This is the second: 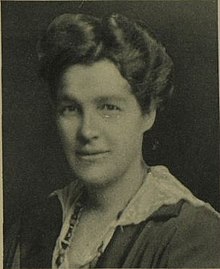 Mrs M.C. Ashby who was standing in Birmingham’s Ladywood constituency as a Liberal candidate, with support from the National Union of Women’s Suffrage Societies.

Margery Corbett Ashby (1882-1981) was the daughter of a Liberal MP, Charles Corbett, and both her parents were strong supporters of women’s suffrage. She had a university education, trained as a teacher in Cambridge and from 1907 to 1909 was secretary of the NUWSS and in 1910, the year she married, she was an organizer for the Liberal party. She resigned from the NUWSS executive committee in 1914, too committed a Liberal to support the Election Fighting Fund policy, by which the NUWSS was backing Labour party candidates at elections.

After the First World War she took Mrs Fawcett’s place at the Versailles Peace Conference (Mrs Fawcett did not wish to attend) and helped advise Germany on the founding of its women’s police force.

Margery Corbett Ashby’s candidature at the 1918 general election caused some difficulty for the Birmingham Society for Women’s Suffrage which was criticized for supporting her, rather than the Labour candidate, as the latter party had, unlike the Liberals, traditionally supported the suffrage movement. She was also supported by the Society for Discharged Soldiers – who obviously liked point 7 of her Election Address.

In her lengthy Election Address Margery Corbett Ashby made her (Liberal) views clear:

At the December 1918 election Margery Corbett Ashby polled 1152 votes and lost her deposit. She then stood, again unsuccessfully, at every inter-war election except that of 1931. She succeeded Eleanor Rathbone as president of the National Union of Societies for Equal Citizenship and in the late 1920s was the co-founder of the Townswomen’s Guild. She also was president of the Women’s Freedom League. At various times she was also president of the British Commonwealth League, member of the executive committee of the Family Endowment Society and chairman of the Association of Moral and Social Hygiene. Margery Corbett Ashby was made a Dame of the British Empire in 1967.

This entry was posted on November 22, 2018, 10:19 am and is filed under Uncategorized. You can follow any responses to this entry through RSS 2.0. You can leave a response, or trackback from your own site.