On 4 April 2016 I gave a talk in the House of Commons at the Regional Suffrage Conference – one of the activities organised by Vote100 in the lead up to the 100th anniversary of (partial) women’s enfranchisement in 2018. I had been asked to speak on the methods that we can all use to recover something of the lives of hitherto unknown suffrage campaigners – the foot soldiers of the movement. I called the talk ‘Hidden from History?: using genealogical data to recover the lives of suffragettes’.

As a demonstration of what can be done – and the techniques used – I picked at random a few names from those who appeared in the Contributors’ List in Votes for Women, the newspaper published by the Women’s Social and Political Union, in the weeks of 7 and 14 April 1911. Over the next few days I will post their stories.

The first name I discussed was Sybil Campion and the second was Miss Susan Cunnington – who each donated 5 shillings to the Cause. The third was Yevonde Cumbers, who turned out to be less hidden from history than most, and the fourth was ‘Miss S.A. Turle’ whose sister, Caroline, was, I saw, also a generous donor. The fifth and sixth were twins, Florence and Beatrice Sotheran.

The final name that I picked at random from the 7 April issue of Votes for Women was that of Mrs Augustine Watkins who donated £1 2s 6d. Some digging through the late-19thc marriage index and censuses showed that in 1877, as a 22-year-old, she had married a man more than twice her age, (George) Herbert Watkins, a photographer.

Further digging revealed Augustine was Herbert Watkins’ second wife. He had opened a studio in Regent Street in the 1850s and took portraits of celebrities such as Dickens – in fact the National Portrait Gallery holds 260 of his photographs – for details see here. His first marriage had taken place in 1853 and the ever helpful Ancestry Hints threw up the fact that it had ended in divorce in 1877. Thanks to Ancestry I was able to read all the details of how Watkins sued for divorce on the grounds of his wife’s adultery. He and Augustine must have married as soon as the decree nisi was granted.

In 1891 he and Augustine and a young daughter  (Florence, born 1879) were living in King Street, Hammersmith. 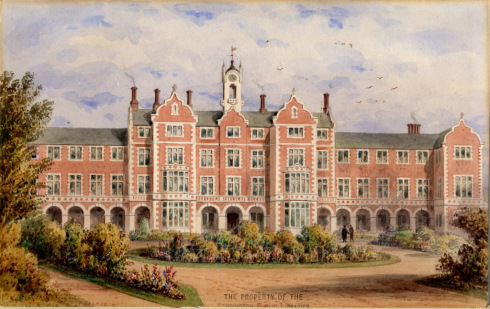 But to my surprise I found that ten years later Herbert Watkins was an inmate of the Kensington Workhouse – while Augustine with their daughter lived in Rowan Road, a pretty street in Hammersmith. The Workhouse records – very helpfully available on Ancestry – seem to show that Watkins had been an inmate since 1898.

Looking at the record for 1912 his previous occupation was indeed given as ‘photographer’, that by way of ‘Religious Persuasion’ he was a Baptist, and that, tellingly, he was allocated a diet appropriate for ‘Feeble Men’.  He was also classed as ‘Aged and Infirm’.

So while the Workhouse authorities were filling out details of Herbert Watkins on their registers, Augustine was making her quite generous donation to the WSPU – and entering herself on the 1911 census as a widow. Of course you can’t necessarily believe everything you read on a census form – her husband is described as ‘married’ on his 1911 census form. Indeed he did not die  until 1916, presumably still in the Workhouse, having lived there for about 18 years. What a sad story.

In fact I can see from various websites that Herbert Watkins’ fate has eluded those interested in his photographic career so I hope these few facts about his later life will prove useful in providing information about his sad end. I’ll alert the National Portrait Gallery. And all this comes of wondering who was the Mrs Augustine Watkins who gave £1 2s 6d to the WSPU in April 1911.

This entry was posted on April 13, 2016, 8:44 am and is filed under Suffrage Stories. You can follow any responses to this entry through RSS 2.0. You can leave a response, or trackback from your own site.