Suffrage Stories: Where Did Christabel Pankhurst Live In Paris?

In early March 1912, after members of the WSPU had launched a window-smashing campaign in the West End of London, the Home Office determined to hold their leaders accountable and immediately arrested Emmeline Pankhurst and Frederick and Emmeline Pethick-Lawrence.  Christabel Pankhurst, however, nimbly escaped over the English Channel to the safety of Paris.

9 Rue Roy, now the Hotel Saint Augustin, is where she took refuge and where she lived for well over a year. It would appear that she rented an apartment in the building – perhaps not then functioning as an hotel.

Here we see Christabel photographed in her room, looking out of the window – perhaps one of those in my photograph. Not that there was much to see – Rue Roy is a narrow,  somewhat nondescript little street, a turning off the Boulevard Haussmann. But this district, still relatively recently developed, was a usefully central and anonymous location in which a fugitive might take up residence. Did Christabel avail herself of the nearby Metro station in Place Saint Augustin? 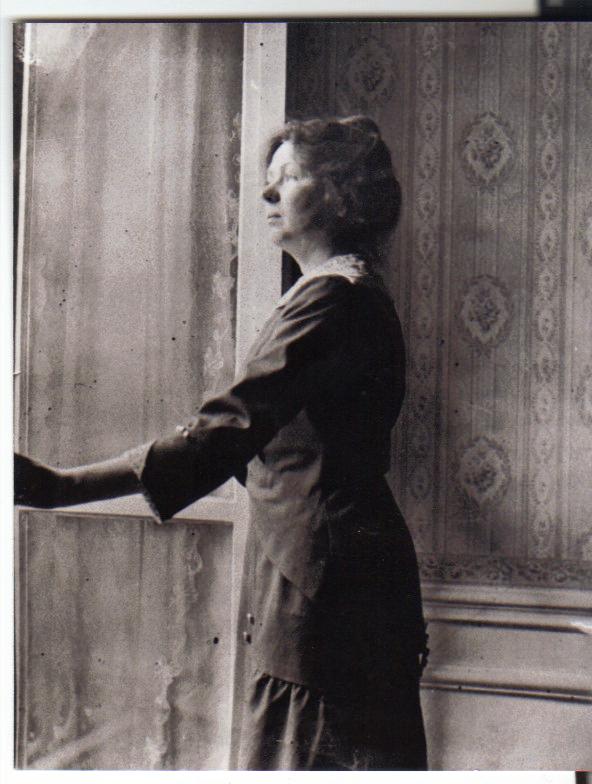 Christabel looking out of the window at 9 Rue Roy

Christabel could not have taken  with her much in the way of personal possessions (though one imagines she perhaps did not regret being forced to acquire a suitably Parisian wardrobe) – but she did arrive well-armed with useful introductions. A mere four or five days after her arrival she was visiting the salon of Winaretta Singer, Princesse de Polignac – an entrée arranged through the good offices of Ethel Smyth, the Princesse’s sometime lover.

It was in these glamorous surroundings that Annie Kenney, on her first visit to Paris, was asked to meet Christabel.  One would love to know more – but in her posthumous memoir, Unshackled, Christabel is distinctly discreet as to how her time in Paris was spent. Or, indeed, how her prolonged sojourn there was financed; she did no work – in the conventional sense – during the two and a half years that she lived in Paris until the outbreak of war in August 1914 made it safe for her to return to England.

Indeed, after the French had refused to extradite her, by the autumn of 1913 Christabel had moved to a rather more central – and presumably more expensive – Parisian address -11 Avenue de la Grande Armeé, later -crossing the Avenue to live at a flat at no. 8. It was from here, in the very heart of Paris, that she conducted the last frenetic months of the WSPU campaign.

and a stone’s throw from the Arc de Triomphe

This entry was posted on April 12, 2013, 12:58 pm and is filed under Suffrage Stories. You can follow any responses to this entry through RSS 2.0. You can leave a response, or trackback from your own site.