Posted by womanandhersphere in 1911 Census, Suffrage Stories, The Garretts and their Circle on July 30, 2012

Since 2009, when details of the 1911 census were released, I have (with, for a time, Dr Jill Liddington) been investigating how the women of the country responded to the call issued by the more militant suffrage societies to boycott the census. In the process I have discovered women of a suffrage inclination of whom, until now, suffrage history has known nothing.

One of these was a ‘Miss S. Marsden’, whose census form was delivered to her at 69 Church Street, Kensington, and who refused the enumerator any details about herself. However, Miss Marsden did not leave the form blank, writing on it one of the longest statements that I have so far encountered.  Although the right edge of the census form is badly damaged, creating gaps in her comments, I think we can get the gist.

‘I, Mdme Mantalini, a municipal voter and tax payer, refuse to fill in this census paper, as I have no intention of furnishing this government with information and thereby helping them to legislate for women without obtaining their consent or first consulting them in the [missing words] effective way possible & extending the franchise to duly qualified women. As a responsible, law-abiding citizen I have conducted my business for sixteen years; as an employer of labour I have [contributed?] to the wealth of the state and in return I have been taxed for the upkeep of no 10 Downing Street. No 10 Downing Street, the official residence of the prime minister, but converted by his wife into a show-room for a French [dress maker?] (free of all duty and taxation) to exhibit his Paris models and take orders from them to be executed in Paris. I [missing words] with very few exceptions the dressmaking establishments in England are all owned by women, & only women & [missing words] workers. It therefore comes to this, that the only way open to us to protest at ‘our trade’ being ruined in [missing words] our taxes, is to drive home to the government by every method available that women are determined [missing words – perhaps ‘not to be governed’] without their consent.’

Would that not whet any researcher’s appetite? Who was Miss Marsden/Mdme Mantalini? What had Margot Asquith been up to?

In fact the second question was the easier to answer. An inspection of The Times archive revealed that in May 1909 Margot Asquith had been called to task by drapers’ associations from around the country for inviting the Parisian designer Paul Poiret to show dresses in 10 Downing Street.

Poiret then was the epitome of chic – designing dresses that relied on draping, rather than tailoring – so much easier to wear – and promoting hobble skirts, harem pants and kimono coats – designs such as these. 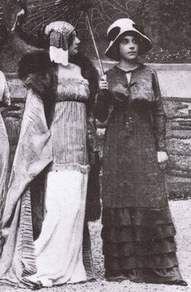 In response to a letter of complaint from an MP,  Mrs Asquith explained,  ‘I received in my private rooms at tea from 20 to 25 of my personal friends and a well-known French costumier, whose models can be bought in any London shop, brought some specimens for the inspection of myself and my guests. It was a purely personal occasion.’ In fact, such was the rumpus, that henceforward Margot Asquith was obliged to patronize British costumiers, such as Lucile  although probably not, I fear, Madame Mantalini.

I thought at first that when Miss Marsden referred to herself on the census paper as ‘Mdme Mantalini’ it was merely as short-hand to describe her position as a dressmaker – that being the name of the dressmaking establishment at which, in Nicholas Nickleby, Kate Nickleby is apprenticed.  But, consulting my 1908 London street directory, I found that the shop at 69 Church Street (which is still there) was, indeed, that of ‘Mrs Sybil Mantalini’. It was then only a short step to establish that Mrs Mantalini was, in fact, Miss Sybil Marsden, who was on the London Electoral Register by dint of her occupation of those premises, and the question of’ ‘Who was Miss S. Marsden?’ was solved.

But now I was hooked. Who was Miss Sybil Marsden? Why was she such an outspoken dressmaker?

I discovered that she had 9 siblings and in 1911 was living at the family home, 82 RedcliffeGardens in South Kensington, with her mother and one unmarried sister. Her father, Algernon Moses Marsden, had been a fine art dealer but, by 1901, had been declared bankrupt several times. His background was most interesting; he had declined to enter the family’s successful clothing business, clearly preferring the more elevated association with ‘art’.

Marsden was by all accounts – mainly in the bankruptcy reports – an engaging fellow – as is evident in the portrait of him by James Tissot, painted in 1877, when Sybil was four-years-old. At that time Marsden was Tissot’s dealer, but gambling and high-living proved his downfall. It would appear that after his final bankruptcy in 1901 he removed himself to New York, where he died in 1920. I can now see that the choice of the name ‘Madame Mantalini’ may have been even more to the point than I first thought. In Nicholas Nickleby it is Mr Mantalini’s extravagance that resulted in the bankruptcy of his wife’s business – an awful warning to Sybil Marsden.  No wonder Algernon’s daughter had little faith in the ability of men to manage her affairs.

The cinéaste members of my family play the Six Degrees of Kevin Bacon game (whereby any named film actor has to be connected with fellow-actor KB by links covering no more than 6 films). I am hopeless at that – but think I might be a contender in Six Degrees of Garrett. This particular case is easy: Sybil Marsden, Algernon Marsden, James Tissot, J.M. Brydon, Agnes and Rhoda Garrett. As I discuss in Enterprising Women: the Garrets and their circle,  the two young women were undergoing their architectural training with Brydon in 1873, at a time when he was working on the design of a new studio for Tissot, attached to the artist’s St John’s Wood house. Did they go on a site visit? Had they perhaps even seen in the flesh, as it were, the tiger skin and the fashionable blue vase, that serve to emphasise Algenon Marsden’s exoticism and good taste.