Posted by womanandhersphere in Mariana Starke on August 22, 2012 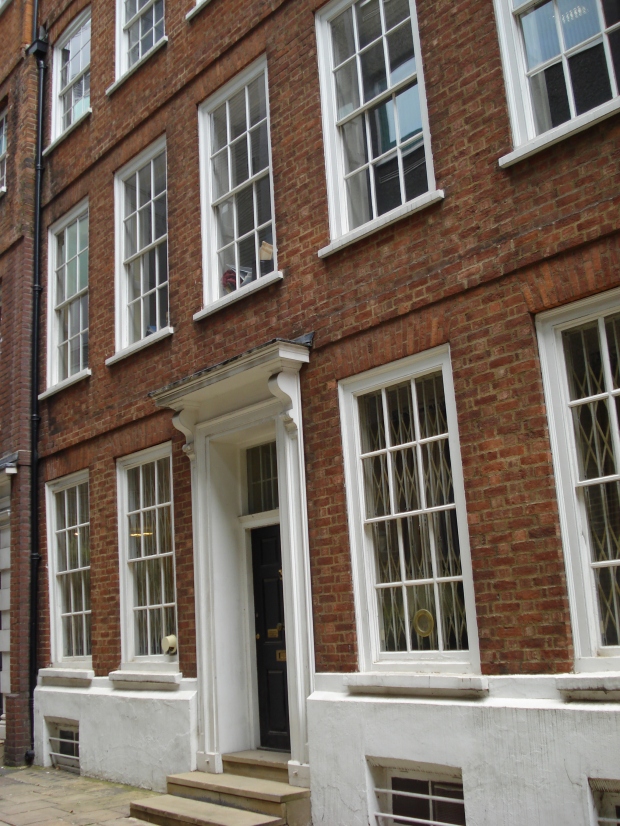 In the late-17th century Thomas Starke, the slave trader, lived and, I think, carried on his business in Mincing Lane in a house rebuilt in the 1670s – after the Great Fire of London. Starke’s house – and all the others in that street- have long since disappeared – now replaced by a Gotham City simulacrum, politely described as a ‘post-modern gothic complex’. However a few London houses built by Mincing Lane’s post-Fire-of London developer, Nicholas Barbon, do remain, including – pictured here – 5-6 Crane’s Court, just off Fleet Street – giving a rough idea of the manner of house in which Starke and his family lived.

Fortunately for us, when Starke – a freeman of the city of London – died in early 1706 several of his children were not yet 21 years old. This meant that the London Court of Orphans was required to draw up an itemized list of his household goods, assets and debts in order to supervise the division of the estate. This inventory provides a marvellous picture of the furnishing of the Mincing Lane house – at least some of which were purchased with the profits from Starke’s slave-trading activity, as well as an insight into Starke’s complicated finances. Moreover, the inventory, made on 18 April 1706, is held in the London Metropolitan Archives, very close to my home, a short walk collapsing the centuries.

Although the inventory does not reveal who was living in the house in 1706, a 1695 tax assessment showed that besides Starke, his wife, and two daughters, the household then comprised two apprentices (both of whom were to figure in later Starke litigation) and three servants – two of them women, one a boy.

The 1706 inventory begins at the top of the house – in the fore garrett – [perhaps a bedroom for the apprentices?] which contained:

One corded bedstead and rods, printed stuff curtains and valance, and flock bed and feather bolster and pillow,  2 blankets and 2 rugs, a table,  2 chests of drawers, a pallet bedstead, 2 chairs, one box – value £2 2s

I assume that ‘corded bedstead’ meant a bed with cords to support the mattress and that  ‘rods’ are curtain-type rods from which hung the printed stuff curtains that surrounded the bed to exclude draughts.

Apart from the value, we can tell that this room was used by more important members of the household than the two garrets because of the use of ‘camblett’ to make the curtains, ‘camblett’ being a fine dress fabric of silk and camel-hair, or wool and goat’s hair, which was a lighter material, replacing broadcloth and serge and quite newly fashionable.. Similarly the lining of the valance with silk was a newish and fashionable furnishing style.

In the room 1 pair of stairs backwards:  [perhaps Starke’s bedroom – to be used for entertaining as well as sleeping.] 1 sacking bedstead, silk and damask curtains and valance lined with silk, a quilt and feather bed bolster, some calico curtains, 1 table, a looking glass, 6 chairs and cushions, a slow grate, shovel, tongs and poker, a brass hearth shovel and tongs, 3 pairs of tapestry hangings – value £36 6s [Peter Earle in The Making of the English Middle Class: Business, Society and Family Life in London 1660-1730 (1989) gives the average value of the furnishings of a merchant’s bedroom as £23.3, positioning Starke’s as rather above average.]

The silk and damask curtains and the valance lined with silk were smart and fashionable, while the presence of the tapestry hangings suggest a room intended for comfort in a slightly old-fashioned style..

In the Dining room [Earle denotes the dining room as the ‘best’ living room in a house of this type, giving the average value of the contents of such a room as £12 2s – making Starke’s furnishings a little above the average in value.]: Gilded leather hangings, 2 tables, a looking glass, 1 side table, 11 cane chairs, 12 cushions, a pallet case, 2 glass sconces, a pair of tables, brass hearth dogs, shovel and tongs – value £13 12s.

The gilded leather hangings were, by the early 18th-century, perhaps a little old fashioned, but the possession of cane chairs marked the Starkes out as a family who were prepared to buy new and fashionable styles. Cane chairs had been new in aristocratic homes in the 1660s, and were taken up by ‘middling men ’ from the 1680s. It would seem that the Starkes’ cane-bottomed chairs required cushions to make them acceptably comfortable.

Earle mentions that the average value of kitchen goods in this period was between £10-£20, putting the Starkes’ batterie de cuisine at the top end of the scale.

The inventory goes on to give the value of Starke’s wearing apparel (£5), household linen, and plate (292 oz, value £74 –presumably including the silver salver and caudle cup that Starke specifically mentioned in his will) – before moving on to monies owed to him and his own debts.

All in all, this is a house of a middling London merchant, one who, with his family, wished to be comfortable but was not desperate to adopt the very newest fashions. I do not think it would have been as elegant as the parlour room set, dating from 1695, that one can see at the Geffrye Museum. Here you can see the Starkes’ cane chairs, but Thomas Starke presumably preferred the older-fashioned tapestries and gilded leather hangings. which many of his fellow merchants – as in the Geffrye Museum re-creation -would have been taking down and replacing with pictures. In fact only three pictures are listed in the Starke inventory, all hanging on the stair case, alongside the household’s only clock. Similarly, the Starkes were, presumably, still eating off pewter and had not been tempted by the more newly fashionable china.

I did find two omissions interesting. The first is that no room is specifically denoted as a counting-house, although at the time of Starke’s death the sum of £245 19s 13/4 [=£32,000 purchasing power in today’s terms] was held in cash in the house. So, perhaps I was incorrect in assuming that, as he was living in Mincing Lane, in the very heart of the trading district, his business would have been done on the premises. And, secondly, I suppose I might have expected a merchant’s possessions to have included at the very least a quantity of ledgers – and, perhaps, some books and a globe.

Sometime after Thomas’ death, his widow and her daughters – Sarah, Martha, Frances and Elizabeth moved out of the City. There no longer being any necessity to live close to business, they chose Chelsea as their new home– more rural, more fashionable. It is possible that they were the first occupants of a newly-built house in Upper Cheyne Row, close to their great friend Lady Mary Rawlinson, widow of a a close associate of Thomas Starke and a former Lord Mayor of the City of London. The Survey of London suggests that this house and its immediate neighbours were built c 1716 and Lady Mary and her daughter, also Mary, lived at 16 Upper Cheyne Row between 1717 and her death in 1725.  Between 1748 and 1757 Thomas Starke’s daughter, Martha, and the younger Mary Rawlinson lived together at 12 Upper Cheyne Row. They were evidently very close; in her will Martha, who died in 1758, left everything to Mary and asked to be buried with her in the same grave in Ewell parish churchyard. However, Mary Rawlinson lived on to 1765 and in a codicil to her will, made in 1764, changed her preferred place of burial  from Ewell to the Rawlinson family vault in St Dionis Church Backhurch in the City (demolished 1868)..

I imagine that Thomas Starke’s tapestries and gilded leather hangings did not make the move from Mincing Lane to Chelsea and that his widow and daughters took the opportunity to furnish the new – airier and lighter – house with new china and new materials to complement the modern fireplaces and panelling. As we shall discover, in the early 18th-century the Starke family began a close association with India and goods – gifts – from the East would have travelled back to decorate these Chelsea rooms, perhaps, eventually coming into the possession of Mariana Starke.

Posted by womanandhersphere in Book of the Week on August 21, 2012 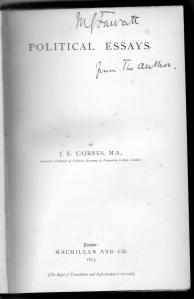 The Irish economist John Cairnes had long been a friend of Henry Fawcett, both part of the Blackheath circle centring on John Stuart Mill. When Millicent Fawcett (aged 23) published her ‘Political Economy for Beginners’ in 1870 Cairnes took it seriously, reviewed it and wrote to her ‘I have just finished my study of your useful little book and send you by this post my notes upon it. You will find I have some serious controversies with you.’ Three years later, when he published ‘Political Essays’ , he sent Millicent a copy – inscribing it ‘MG Fawcett from the author’. 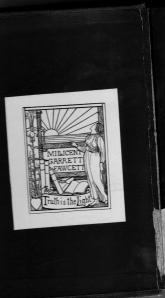 A ‘From the Author’ slip has survived the handling of the last 140 years – and Millicent Fawcett has added her delightful bookplate to the front pastedown. However, an inquisitive inspection reveals that not all the pages are cut.

Latterly the book was in the library of O.R. McGregor (Professor Lord McGregor of Durris) author of ‘Divorce in England’ which had, for its time, 1957, an excellent bibliography – revealing the author’s wide interest in ‘women’s history’. On the spine the cloth binding is chipped – missing in parts – would benefit from rebacking. Otherwise a good copy – and a very interesting association copy £150.