Book of the Week: The Love-Letters of Mary Hays, ed A.F. Wedd

Posted by womanandhersphere in Book of the Week on September 18, 2012

Tortured by her sensibility, for one blissful year 17-year old Mary Hays enjoyed – or suffered – a romance with John Eccles, a fellow non-conformist who lodged close by her family home in Southwark. Initially opposed by their families, the romance appeared to be approaching a happy conclusion when, shortly before the marriage, John died. However that year had produced an abundance of correspondence, letters treasured by Mary Hays for the rest of her life. In her Introduction to the edited version, her great-great-niece explains how:

‘After many years of oblivion, the papers from which this book has been compiled were discovered stored away in a cupboard of the little old house inhabited by the descendants of Mary Hays’s sister “Sister Dunkin”. The Love-Letters, with Mary’s own introduction and notes, had been copied, in the exquisite writing of her friend Mrs Collier, into two volumes, from which the handsome morocco covers, stamped with the initials M.H. and J.E., had fallen.. The other letters, dusty, stained, and nibbled by mice, but still tied in packets and labelled with the names of their famous authors, were contained in a small wooden chest.’

Is that not a researcher’s dream? For, 230 years later, Mary Hays attracts attention. Having struggling to surface from her great grief – it took about 10 years – she turned from letter to book writing, producing novels, polemics – including Appeal to the Men of Great Britain on Behalf of the Women, 1798 – in which she refutes the contemporary rationale for the subjection of women –  and, most importantly, her six volumes of Female Biography, 1802. In these years she moved in the London literary and philosophical circles that included Mary Wollstonecraft and William Godwin, letters from whom are printed at the end of Love-Letters.

By editing these letters Annie Frances Wedd played her part in the renaissance of Mary Hays. In her Introduction she noted that ‘Mary Hays is now unknown; her books are unread; even her connection with the literary celebrities of her day has been forgotten’. However, when the late 20th-century ‘female turn’ in literary studies ensured that novels such as Hays’s Emma Courtney were reprinted, The Love-Letters was there to provide quotable material to place Mary Hays firmly in Mary Wollstonecraft’s circle. Miss Wedd’s Introduction is delightfully tart. She makes clear that, while feeling a sympathy with her forebear, she did not herself suffer from the ‘exquisite sensibility’ that rendered Mary Hays’s days so melancholy – noting, for instance, that when, after Eccles’ death, Mary upbraids ‘the nightingale for not joining in her plaint, as the month was August this was hardly to be expected’.

The book is in very good condition, is quite scarce – £45 (plus postage). To buy contact: e.crawford@sphere20.freeserve.co.uk

Posted by womanandhersphere in Women Writers and Italy on August 24, 2012 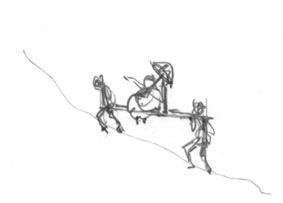 In 1770 Anna Miller and her husband crossed into Italy via Mont Cenis., the route used for centuries by tourists – and armies – to travel from France into Italy  It being another 30 years or so before Napoleon carved out a road through the pass and so allowed for coach travel, the Millers and their contemporaries enjoyed a very much more energetic adventure.

[The drawing is a reimagining, by Sandy Nightingale, of a crossing of Mont Cenis ]

The Millers spent the night before the ascent at Lanebourg where, Anna reported, ‘There are about an hundred porters, whose names are upon a list; the Syndics take care that they carry travellers in their turn, and are referred to, in case of any dispute that may arise amongst them. ‘While we were eating a very bad supper, composed of liver and brains, (to what animal they belonged, I do not pretend to decide) the Syndic of the Porters came in, to judge how many of the latter we should have occasion for. Four were assigned for me, and six for M  —‘

Having passed a sleepless night, partly owing to a mountain torrent that descends close to the window, we set out at five o’clock the next morning in our chairs, the ascent not being ten paces from the door. These chairs are constructed in the most simple and portable manner. There are two small bars of wood for arms, and another bar behind which rises but little higher than the arms, and which serves as a support to the back of the person in the chair; the seat is matted with bark of trees and ropes twisted together, which yields to the weight of those thus carried. You are so near the ground, that there is not the least difficulty in stepping out of the chair at pleasure; there are no legs to these chairs, but in their room a board is tied on by ropes to the seat, which the feet being placed upon, and the cords as much shortened as can conveniently be, the legs and feet are well supported, being sufficiently raised to clear them entirely of any shock from uneven or rocky ground. The chairs are fixt on poles.. The chairmen are aided by straps over their shoulders, in the same manner as they carry in England.

I liked this manner of travelling very much. You are conveyed along surprisingly fast on the plain; the porters run rather than walk’

‘Our chaise being taken to pieces, it was carried on the mules’ backs. These animals make a droll appearance, with a wheel on each side, and the body of a chaise on their back.

Just before we gain the plain, the ascent augments in rapidity. The air was very keen on the plain; and I was obliged to wrap myself up in a pelice, lined through with fur, although the day was remarkably fine for that country.

The descent is extremely rapid for about 300 yards. I don’t know any thing this road resembles more than a broken stone staircase, which occasions the porteurs to turn so suddenly by its windings, that the person in the chair passes clear over the sharp angles, cutting them, as it were, across. Notwithstanding the novelty of this manner of travelling, the steepness of the road, and the velocity with which I descended, my porteurs running almost the whole way, I never once felt myself sufficiently frightened to lay hold of the arms of the chair, my attention was so much engaged with the singularity and variety of the prospect below. At some moments during the the descent, I could not help fancying myself a witch upon a broomstick. 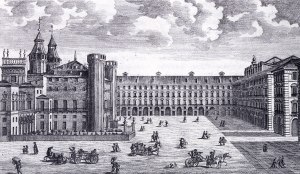 18th-century Turin, comfortable civilisation after the rigours of Cenis

Having crossed over into Italy  ‘on the finest day imaginable’ Anna Miller assures the recipient of her letter that ‘we are safely arrived without having met with the least accident, and are well lodged in the house of Countess d’Or-b-ns at Turin.’