If you are one of my readers interested in the history of the women’s suffrage movement, you will be pleased to know that, in this centennial year, Women’s History Review is allowing free access to a number of past-published articles dealing with all aspects of the campaign. Here is the link to the collection. This should be particularly useful to Early Stage Researchers specialising in suffrage history who may be finding it difficult to grasp of the scope of previously published work in the field. 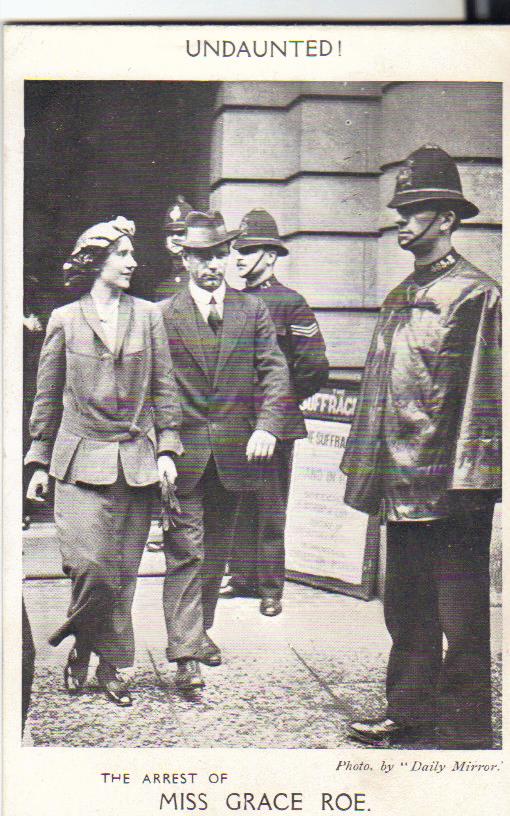 Grace Roe walking out of Lincoln’s Inn House – under arrest – May 1914. She was held in prison from 23 May, on hunger strike and forcibly fed, until finally released on 10 August, under the government amnesty

I’m particularly pleased that an article I wrote that was published in 2008 – Police, Prisons and Prisoners: the view from the Home Office – is now easily accessible. It is based on Home Office papers held in the National Archives, viewing suffragette militancy through the eyes of the authorities rather, than as been more usual, through the writings of the suffragettes. The article concludes by demonstrating how, in the weeks before the outbreak of war in August 1914, the authorities were tightening their grip on the WSPU. The final paragraph of the article reads:

‘As a final thought, rather than asking the usual question “Did militancy achieve votes for women?”, I would like to pose the question “Could the government have been successful in suppressing the WSPU?” By the summer of 1914 it certainly appeared to have every intention of doing so. The impression has remained, fostered very effectively in their lifetimes by the members of the Suffragette Fellowship, women who, of course, never saw the files that the state had compiled on them, that the WSPU was set on a winning trajectory and that only their patriotism brought the campaign to a conclusion. But is this a true picture of the battle between the Home Office and the suffragettes when the shutter snapped in August 1914? I would suggest that the position of the WSPU as seen from the Home Office was altogether more precarious.’

This is not a conclusion from which, in the ten years since the article was published, I’ve had any reason to differ.

This entry was posted on May 29, 2018, 10:07 am and is filed under Suffrage Stories. You can follow any responses to this entry through RSS 2.0. You can leave a response, or trackback from your own site.