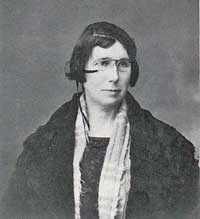 Ethel Moorhead is one of my favourite militant suffragettes. Not on account of the reality of her campaign of damage and arson,which was extensive, but because of the way she later wrote about it.

Ethel Moorhead’s militant suffrage career is well known – or, at least, well known to those who take the trouble to read about it in The Women’s Suffrage Movement: a reference guide or in Leah Leneman’s entry on her in The Oxford Dictionary of National Biography – for she was one of the most turbulent of the Scottish suffragettes. In 1913 Ethel was a ‘Mouse’ – on the run from the police, let out of prison after hunger striking.  Over a period of months, until she was rearrested, caught redhanded about to create further mayhem, she left a trail of destruction as she roamed Perthshire and Renfrewshire, setting fire to buildings. Her close companion on this jaunt was Fanny Parker (about whom you can also read in The Reference Guide).

So far, so not an entirely unusual way of life for a militant suffragette. But it is the life that she lived after the war that is so intriguing. She and Fanny remained close until the latter’s death in 1924 – in Bordeaux. She was living there with Ethel and Ernest Walsh, a young American poet and Ethel’s protege.  With money left to her by Fanny, Ethel and Ernest then launched This Quarter, the most Modernist of little magazines, publishing in the first issue work by Ezra Pound and in the second work by James Joyce and Djuna Barnes.

This Quarter, Vol 1: 2 – the ‘Incendaries’ issue (courtesy of University of South Carolina Libraries)

No editorial modesty prevented Ethel from including in the first issue four of her paintings (oh, yes, she had had a thorough art training in ‘Greydoom’ as, in a Modernist way, she referenced Edinburgh) and, in the second issue, Incendaries (Work in Progress) a moving, autobiographical account of her early life and suffragette activities. Incidentally, ‘Work in Progress’ was a phrase attached to the title of work by at least one other contributor to This Quarter  – suggesting that the writer is still grappling with his/her material – is still thinking it through. – in an acceptably Modernist stream-of-consciousness manner.  Alas, however, Ethel did not produce any further installments of Incendaries. She and Ernest Walsh co-edited those first two issues and after his death in 1926 she continued as sole editor for two more delightfully idiosyncratic issues, until spring 1929. The magazine continued until 1932, but Ethel had bowed out.

I don’t feel able to pontificate on the relationship between Ethel and Ernest Walsh. Her Wikipedia entry says that they were married, which they were certainly not. Another website states that she had a child by him, which she did not. Walsh did have a daughter with Kay Boyle, an American novelist, who made clear that she replaced Ethel in Ernest’s affections.

Incidentally, Kay Boyle left a description of Ethel –‘ short bobbed hair, with only a little grey in it, and the pince-nez she wore gave her an air of authority; but there was at the same time something like shyness, or wariness in her small uneasy brown eyes and her tense mouth.’ This was slightly more flattering than that issued by the Criminal Record OFfice in 1914 – ‘aged 44, 5’6″ tall, with brown eyes (‘wears pinze-nez’), oblong face, receding chin, slim build, stooping shoulders’. Kay was, of course, a far more glamorous creature.

But back in 1913 there is no doubt of the affection Ethel and Fanny (‘Fan’) Parker felt for each other. As Ethel wrote in Incendaries – ‘They snatched friendship as they rushed past on mad quests’. And in Incendaries she describes one particular ‘mad quest’ – the burning of a church.

‘Fan had on a jaunty dress, a coloured sweater and a knitted cap to match and was gracefully padded with the necessities of the job. The Mouse was wearing the blue dress Fan had borrowed from the Glasgow doctor’s wife and which she was always clamouring for, – she was uncomfortably padded with the necessities of the job, they filled out the blue suit and made it fit better. She had on the Rufus wig [it was red], and blue earrings, and a red hat and veil. They looked queer and men ogled them. They both carried harmless looking housewife bags, but which were heavy with paraffin and there were even small lumps of coal in the bottom. They were on a journey, – when it got dark there were eight miles to walk. They were not gay and jaunty.

About midnight they got to the outskirts of the village. All was dark and quiet. They went into a field to wait until all was quieter. They put down their packs and were afraid of falling asleep..The day before they had scouted the pagan temple, – all had been memorized, they wouldn’t have to think now. They were cold as black granite, their minds were black granite..They reached the old churchyard as the bells rang out twice. They made their way through the tombstones to the church. On a tombstone with pedestals, under a small window, they put down their stuff. They took it off their persons and laid it down carefully.

The window was a small ventilating window like a skylight. The Mouse could reach it by standing on Fan’s shoulders. It was held open by a fixed iron bar. The iron bar did not give. She had to squeeze through the narrow space between one side of the iron bar and the wall. She squeezed through and let go and fell amongst pews. She got up and made her way to a little Gothic doorway. She knew where to find it. It was on the same side as the window. She found it easily, – she ran her hands over the oak door feeling for the key, she hoped the key would be in the lock – she pulled something with a spring and the door opened..Then Fan (who was in a frenzy to get in by the skylight window, and nearly got in) came in the Gothic doorway.

They carried in the stuff from the tombstone, they carried in the oil, the candles, the wadding, into the pagan temple for the last rites. They shut the oak door behind them. They knew where to go. They piled a heap of firelighters and on the top they put small lumps of coal and broken candles. At a little distance off they placed two candles for lighting, they connected them with the firelighters by long strips of wadding, they soaked the wadding with paraffin, they poured paraffin on the firelighters, they poured paraffin on the woodwork, they emptied a tube of inflammable stuff, they lit the candles, they walked out by the Gothic doorway.’

This is as dramatic a retelling as any of an episode of suffragette militancy. There is no doubt that Ethel was the Mouse and that, therefore, the arson attack was likely to have been made while she was on the run between October 1913 and February 1914 – or between her release from prison later in February 1914 and the outbreak of war. But which church was it that they fired? So far I’ve been unable to identify it. UPDATE. While researching something else I believe I’ve found the answer. The church was Carmichael Parish Church (now Cairngryffe Parish Church) in Lanarkshire. An arson attempt was made on it at the beginning of July 1914.

‘ In 1914 a group of women suffragettes broke into the Church and attempted to set it on fire.  Beyond some scorching of the gallery carving no structural damage was done however and the Church is believed to have been saved by its hard oak furnishings.  The Kirk Session entry recording this event reads as follows :-

“8th July 1914.  The Kirk Session offer to Almighty God their heartfelt thanks for the preservation of their dear and beautiful Church from destruction by fire on a night between Sunday28th June and 1st July, 1914.  Some person or persons unknown entered the Church by breaking the vestry window and piled chairs, bibles etc on the pews underneath the Carmichael gallery and, after sprinkling these with inflammable material, set fire to them.  The damage was trifling considering what might have been done if the flames had taken hold of Carmichael gallery.  The Kirk Session are grieved that any person could have allowed such sacrilegious intentions to enter into his or her heart.”

Fanny Parker was arrested a few days later on 8 July, while she and Ethel were attempting to place two bombs at Burns’ cottage at Alloway – about 45 miles from Carmichael. Ethel escaped and was not recaptured by the time war was declared on 4 August.

Ethel Moorhead has most definitely not been forgotten. Apart from all that has been written about her – and she was even the subject of a short film –  ‘Ethel Moorhead Place’ forms a little suffragette enclave (close to ‘Frances Gordon Road’ – she was another militant) in a new development on the outskirts of Perth. I wonder what she would have made of this as a memorial?

This entry was posted on May 23, 2018, 3:05 pm and is filed under Suffrage Stories. You can follow any responses to this entry through RSS 2.0. You can leave a response, or trackback from your own site.