Today – 7 June 2016 – marks the 150th anniversary of the first petition presented in Parliament in support of an attempt to gain for women the parliamentary vote.

I have just attended an event sponsored by the Fawcett Society to celebrate this anniversary – held in the Speaker’s House in Parliament. At this event it was announced that efforts would be made to erect a statue to Millicent Fawcett in Parliament Square. See also my post  published some time ago – Make Millicent Fawcett Visible – http://wp.me/p2AEiO-qD

Below is a short article I published earlier setting out the facts behind the petition. 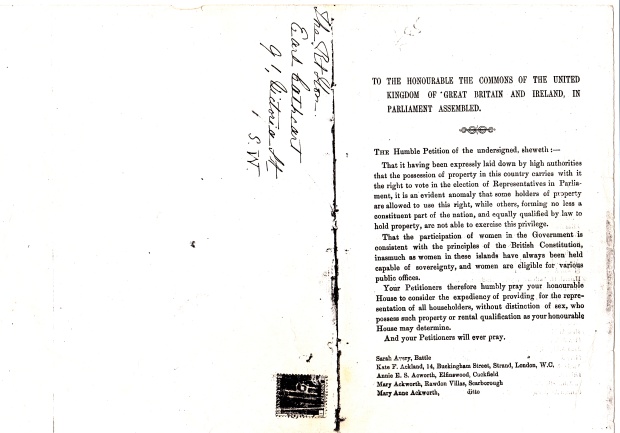 This is – I think – the most important document of the women’s suffrage campaign. It was the foundation for all that came after.

Back in the days when the world was young, there was no internet, and antiquarian booksellers – as well as the layman/woman book-buyer – had to search their quarry among the stacks of brick and mortar bookshops, my time, when not engaged in child care, was spent touring London and the market towns of southern England in search of the books and ephemera with which I and my customers might resurrect the women that were famously ‘hidden from history’.

These days have long passed away – now we need only sit at home and search internet book-selling sites,  trawling through the print-on-demand dross in the increasingly forlorn hope of finding the odd nugget of treasure. The corollary, of course, is that there are now precious few brick and mortar bookshops selling second-hand/antiquarian books.

In those olden days I even thought it occasionally worthwhile to take a tour down Portobello Road on a Saturday morning, not something I have  done  for a long time, now that Portobello’s landlords are handing the antiques arcades over to fashion chain stores. But that particular Saturday-morning visit was memorable because it was in a bookselling alcove in the warrens that stretch behind Portobello Road that I came across one of the most interesting finds of my bookselling career – a copy of the pamphlet edition of the 1866 women’s suffrage petition.

The petition itself comprised  a long scroll onto which were pasted the signatures of the (circa) 1500 women who, in the spring of 1866,  were prepared to put their names to a request (it was certainly not yet a demand) that women who met the requisite  property qualifications , as set out in the Reform bill then under discussion, should be able to cast a parliamentary vote alongside men. The petition had been organised by a group of women who formed themselves into a small informal committee – among their number being Barbara Bodichon, Bessie Rayner Parkes, Elizabeth Garrett, and Emily Davies.  John Stuart Mill, for whom they had campaigned when he had contested – and won – the Westminster parliamentary seat the previous year, had agreed to present the petition.

Emily Davies was the businesswoman of the group and it was she who decided that the names of those who had signed the petition should be printed in pamphlet form and sent to  the weekly papers so that, as she wrote on 18 July 1866 to Helen Taylor (Mill’s step-daughter), ‘ in case they take any notice, they make know what they are commenting on.’  Copies of the petition pamphlet were also sent to members of the House of Commons and the House of Lords.

The copy of ‘my’ 1866 petition pamphlet is, as you see, addressed to Earl Cathcart –  the 3rd Earl, Alan Frederick Cathcart. I suspect he was not overly interested in the rights of women.

I did sell the pamphlet almost as soon as I found it but, before parting with it, had the sense to take a photocopy. That sounds nothing extraordinary, but back in those days photocopiers were not the casual desk accessory that they are today and in order to process the petition’s 38 pages I had to visit the machine in the local library. How glad I am that I bothered to do so. For having easy access to those 1499 names allowed me not only to build up the pattern of political and friendship networks supporting the suffrage campaign that lies at the heart of The Women’s Suffrage Movement: a reference guide, but also provided a starting-point for researching The Women’s Suffrage Movement: a regional survey, in which the part each region, county and town played in the campaign is detailed. 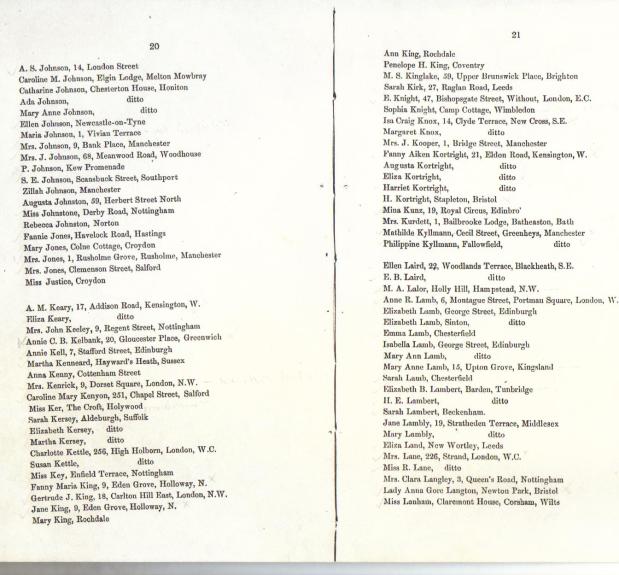 You can see, if your mind works along the same way as mine, what pleasure can be had in attempting to identify all these women. For instance, on this page – chosen at random:

Mrs Kenrick of 9 Dorset Square in 1873 was a member of the executive committee of the Ladies’ Association for the Education of Women for the Medical Association.

Gertrude King of 18 Carlton Hill East, was a member of the Kensington Society (a group of women who met and corresponded in order to discuss the position and prospects for women) and by 1874 was secretary of the Society for the Employment of Women.

Fanny and Jane King, 9 Eden Grove, Holloway, were the wife and daughter of John King, a pianoforte maker, who was one of the oldest acquaintances of William Lovett, the Chartist leader (one of King’s sons had ‘Lovett’ as a middle name). King was a long-standing member of Lovett’s National Association for Promoting the Political and Social Improvement of the People. Artisan radicals such as the Kings were one of the groups contacted by the organisers of the 1866 women’s suffrage petition. 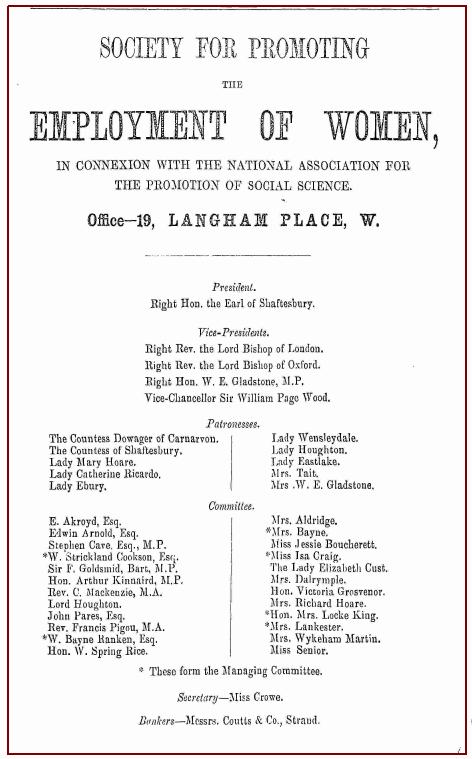 Notice that appeared in the Alexandria Magazine, May 1st, 1864. NB Isa Craig as member of the committee

Isa Craig Knox of 14 Clyde Terrace, New Cross  – a close friend of Bessie Rayer Parkes – was assistant secretary of the National Association for the Promotion of Social Science, a founder of the Kensington Society and a leading member of the Society for the Employment of Women. For more on Isa Craig see her entry in my Women’s Suffrage Movement: a reference guide.

Fanny Aiken Kortright of  21 Eldon Road, Kensington, was a writer of sensational novels.  She must quite soon have regretted signing this petition, for in 1869 she printed for private circulation a pamphlet AGAINST the Woman’s Right movement, entitled Pro Aris et Focis, which won the approval of Queen Victoria and the sympathy of the then Prime Minister. Eliza and Harriet were her older sisters. Another, married, sister also signed the petition.

Philippine Kyllman, Fallowfield, Manchester, was the wife of Max Kyllman, a wealthy young Manchester businessman interested in Co-operative matters.  Kyllmann provided capital for a mill established in Manchester by George Holyoake and Edward Owen Greening on a profit-sharing basis – though it quickly failed. For more about Philippine Kyllman see her entry in my Women’s Suffrage Movement: a reference guide.

As for Sarah Kersey of Aldeburgh you can find a little more about her in an earlier post I published about Aldeburgh and the petition.

And for many of the others on these two pages – as on all the others that comprise the petition – something can be discovered about the lives of most of the women who were sufficiently bold as to sign it.

As far as I know the only printed copy of the Petition held in a public collection is that which resides in the  Emily Davies Papers in the Girton Archive.

The Parliamentary Archives have now digitised the petion – using my ancient photocopy – see http://www.parliament.uk/documents/parliamentary-archives/1866SuffragePetitionNamesWebJune16.pdf > Many happy hours can now be sent searching to see who the women were who were prepared to put their name to this revolutionay document.

STOP PRESS: THE COPY THAT I SOLD HAS BEEN LENT TO THE ‘ENDLESS ENDEAVOURS’ EXHIBITION SHOWING  AT LSE – http://www.lse.ac.uk/library/exhibitions/home.aspx.

This entry was posted on September 15, 2015, 10:07 am and is filed under Collecting Suffrage, Suffrage Stories. You can follow any responses to this entry through RSS 2.0. You can leave a response, or trackback from your own site.