To celebrate the release on 12 October of the film ‘Suffragette’  (with which I had a slight association) I will post each day an image of a suffrage item that has passed through my hands in the very many years that I have been dealing in suffrage-related books and ephemera.

For my current catalogue – No 189 – which contains a good deal of suffrage material – as well as general books and ephemera by and about women – see here. 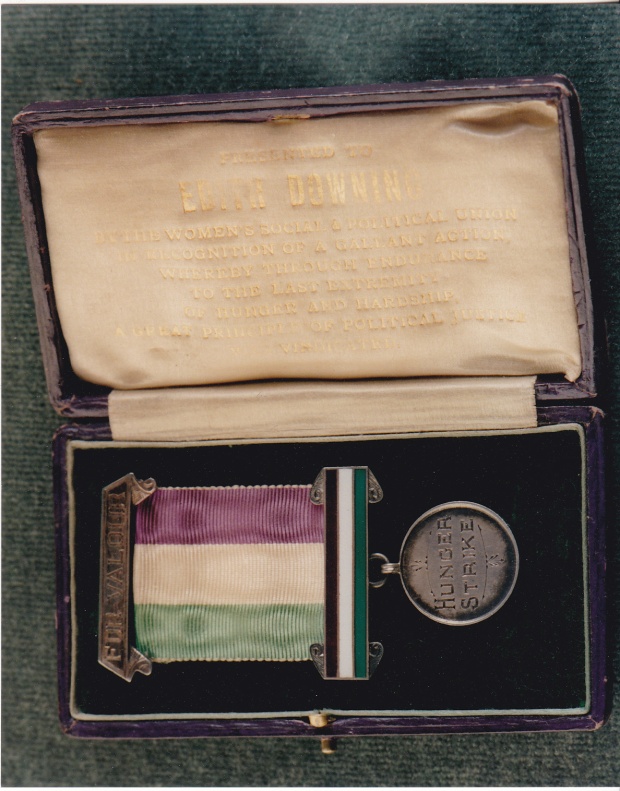 Edith Downing was a sculptor, living in Tite Street, Chelsea, who joined the Women’s Social and Political Union in 1908. Earlier, certainly as early as 1903 – if not before – she had been a member of the London society associated with the non-militant National Union of Suffrage Societies. 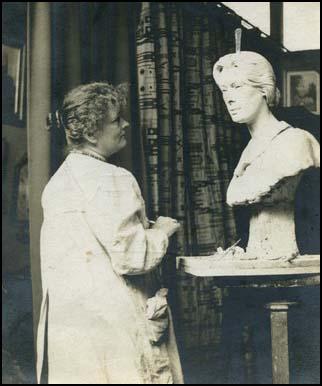 Edith Downing in her studio

She put her artistic talent to the suffrage cause and in June 1910 she was one of the organisers of the WSPU/WFL’s spectacular ‘Prison to Citizenship’ Procession. As well as the hunger strike medal I also once, quite coincidentally, acquired  a small statuette that she had sold at a suffrage bazaar held to raise money for the WSPU.

Edith Downing was, however, equally prepared to take militant action and in March 1912 took part in the WSPU’s West-End window-smashing raid. As a result she was imprisoned and while in Holloway took part in the hunger-strike and was forcibly fed.

She was awarded the WSPU’s hunger strike medal on her release. For more details of Edith Downing’s involvement with the suffrage cause see her entry in my The Women’s Suffrage Movement: a reference guide.

Scenes of both the window-smashing raid and of forcible feeding are shown very effectively in the film ‘Suffragette’. And I don’t think it’s giving too much away to say that a hunger strike medal plays a small part in the lead character’s conversion to the cause.

The hunger strike medal awarded to Edith’s sister, Caroline Lowder Downing, is now held in the Houses of Parliament collection –  see here. For details about the Suffragette Season of talks and tours (which will, I’m sure, include a chance to see Caroline Downing’s medal) that Parliament has launched to coincide with the release of ‘Suffragette’ see here.

This entry was posted on September 14, 2015, 8:46 am and is filed under Collecting Suffrage, Suffrage Stories. You can follow any responses to this entry through RSS 2.0. You can leave a response, or trackback from your own site.