Last week I visited two small exhibitions – both centring on the theme of ‘Campaigning’.

The first was a temporary exhibition (alas, it ends tomorrow, Friday 22 May, so hurry to catch it) – Blackguards in Bonnets – at the impressive Jewish Museum in Camden Town. This tells the story of the involvement of Jewish women and men in the struggle for emancipation. It centres particularly on the 20th-century campaign for women’s suffrage in which many members of the Jewish community took leading roles.

Israel Zangwill at the WSPU’s June 1908 demonstration with, on the far left, Emmeline Pethick Lawrence and on his right Christabel Pankhurst

The writer, Israel Zangwill, a noted speaker on behalf of the movement, is represented by this image. In March 1912 Kate Frye attended a meeting addressed by him and wrote of it in her diary:

‘”I turned to Mrs Mansel, just before he finished, saying ‘Doesn’t he make one think of – and isn’t he like – Spring’” That word concluded his speech, and it was like the Spring in its freshness and gaiety, life and hope, and so deliciously witty. I have never heard a large audience laugh so quickly and as gladly as this audience, the response was almost before the spoken word, in fact there was not a dull flash of the eye all the evening.’

Also on display are a number of items that related to the involvement in the WSPU and Jewish League for Women’s Suffrage campaigns of the wealthy Lowy family. Henrietta Lowy and four of her daughters had joined the WSPU in 1908.

76 Holland Park – once the Lowys’ home – and one from which they were all absent on Census Night, 1911, following the WSPU boycott call

Here, too, you can see Gertrude Lowy’s hunger-strike medal. She was imprisoned after taking part in the March 1912 window-smashing raid.

But it wasn’t only wealthy members of the established Jewish community whom suffrage campaigners were keen to convert to their cause. In the autumn of 1913 the New Constitutional Society for Women’s Suffrage took their message down to the sweatshops of Whitechapel.

This leaflet, printed in Yiddish, was saved by Kate Frye from the quantity she delivered and is on display, together with her diary open at the entry for 27 September 1913, in which she describes a tea party the NCS gave for the local woman and girls, writing:

‘I chatted and handed round. The girls were so nice – nearly all Jewesses. The pitiful tales they tell of the sweated work is awful – and they are so intelligent – and quite well dressed. The Jews are an example to the gentile in that way.’

Later in the week I went to the LSE Library to view their new exhibition space – and the first exhibition to be shown in it.

The theme is ‘Campaigning’ – covering the suffrage movement (a slight nod to male enfranchisement with the greater emphasis placed on the women’s campaign), Liberations – Gay and Female – and campaigns for Peace. One wall of the exhibition space allows for the display of images, moving on a loop – with space in front devoted to a static display of CND badges, a couple of 19th-century documents, an Artists’ Suffrage League poster and a ‘Votes for Women’ scarf. These advertise, as it were, the themes of the three types of campaign. 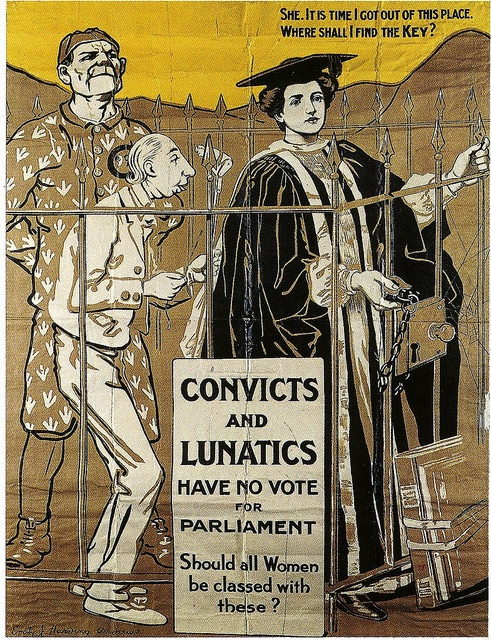 This poster – focussing on the plight of the unenfranchised woman graduate – should appeal to at least 50% of LSE students. For my post on the artist see here

In the centre of the space is a single display case in which neatly chosen documents highlight the different ways in which the campaigns were organised – and, most importantly in my eyes, stresses the rifts and divisions that are a sine qua non, it would appear, of all pressure groups.

Although small, the exhibition makes its points very well. They stick in the mind. It’s presumably intended to catch the eye of LSE students as they pass in and out of the Library entrance and is not intended to deliver in-depth information. Small and simple is no bad thing.

But, oh dear, I did wish that some acknowledgement of Millicent Fawcett and the National Union of Women’s Suffrage Societies had been included in the display. ‘Suffrage’ yet again was only represented by Mrs Pankhurst and the WSPU, whereas the Women’s Library@LSE contains a wealth of material inherited from the NUWSS. As I viewed ‘Campaigning’ it occurred to me that it would be rather a good idea if a future exhibition could, in the same simple manner, by making reference to the NUWSS and the Women’s Freedom League (and, perhaps, some of the smaller societies), demonstrate that the women’s suffrage campaign was more complicated and multifaceted than it is popularly presented.

This entry was posted on May 21, 2015, 1:04 pm and is filed under Suffrage Stories. You can follow any responses to this entry through RSS 2.0. You can leave a response, or trackback from your own site.