This image of the ‘Bugler Girl’-  or ‘Clarion Girl’ – had a resonance for the suffrage campaign on both sides of the Atlantic.

The design was originally used on a poster to advertise the NUWSS spectacular procession of 13 June 1908. [For an article about the banners created for that occasion see here.]

The artist is known to be Caroline Watts but, as ever with the artists who contributed so much to the imagery of the suffrage campaign, I asked myself  -who was she? This is what I discovered.

Caroline Marsh Watts was born at Handsworth in 1868, a daughter of Robert Watts, a button manufacturer, and his wife Mary Maria. Caroline was the youngest child in the family of six children and her mother died, aged 36, a year or so after her birth. Robert Watts never remarried and their maternal grandmother moved into the household to help run the business and care for the children. In 1871 Robert Watts’ business, which he ran in partnership with John Shakespeare Manton, had 470 employees – with premises at the Regent Works, Regent Street and at Frederick Street, Birmingham.

By 1891 the family (Robert Watts, two of his daughters, Mary and Caroline, his mother-in-law and 4 year-old grandson) had moved south and were living at Ailsa Road, St Margaret’s Twickenham. Robert Watts had retired and Caroline was an art student – we know she studied at the Slade.

Robert Watts died in 1894, leaving something over £8000, and by 1901 Caroline had set up home with her sister Mary – and one servant – at 83 Charlwood Street, Pimlico. Mary was employed as a ‘compiler of indexes’ and Caroline was ‘an artist – painter’.

In fact, from at least 1899 Caroline had been commissioned as an illustrator for a series of translations of Arthurian and other romances. These were the work of the renowned folklorist Jessie L. Weston and the majority were published by the firm of David Nutt. 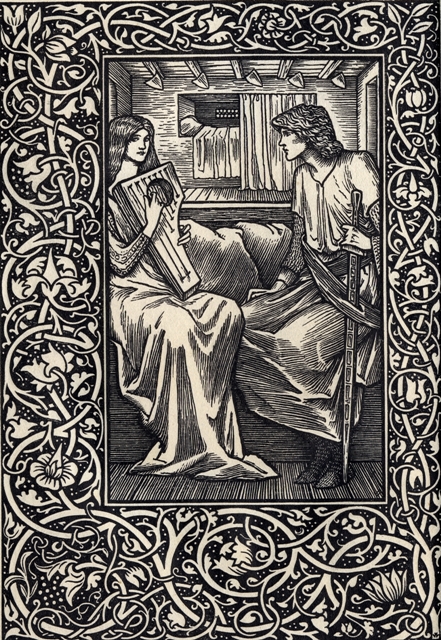 One of Caaroline Watts’ illustrations to ‘Tristan and Iseult’, translated by Jessie L. Weston and published by David Nutt, 1902

At the turn of the century the firm of David Nutt was run by Alfred Trubner Nutt, the son of the founder. Alfred Nutt was also president of the Folk-Lore Society – hence his interest in publishing texts such as those written by Jessie Weston. As these were so close to the publisher’s heart I imagine he took considerable care when selecting their illustrator and because Caroline Watts continued to receive commissions from Alfred Nutt I would think she must have become part of the publisher’s friendship circle. It may well have been through association with this firm that Caroline’s sister Mary developed her career as an indexer.

Illustrated by Caroline Watts and published by David Nutt in 1904

Nutt’s French wife, Marie. subscribed to NUWSS in 1906 and in February 1907 took part in the ‘Mud March’. After the tragic death of her husband (he drowned in the Seine while attempting to rescue his invalid son whose pony had bolted and run into the river; the son was saved by passers by) – Marie Nutt took over the running of the firm of David Nutt and in the next few years published many texts relevant to the women’s suffrage cause.

Such was the suffrage zeitgeist amongst London-based women artists at the time that Caroline Watts may have been drawn towards the NUWSS by any number of associations, but her connection with Marie Nutt is one clear thread.

It doesn’t take much imagination to recognise that Caroline Watt’s design for the ‘Bugler Girl’ is closely associated with the heroic images she was creating for commissions from Alfred Nutt.

The NUWSS was at pains to make clear that the militant imagery of the ‘Bugler Girl’ didn’t represent a violent organization. As a member of the NUWSS governing-council explained, ‘Our Bugler Girl carries her bugle and her banner; her sword is sheathed by her side; it is there, but not drawn, and if it were drawn, it would not be the sword of the flesh, but of the spirit. For ours is not a warfare against men, but against evil..’

The image, created as I mentioned, to advertise the June 1908 NUWSS procession was subsequently used – often in black and white rather than colour – on posters and flyers advertising NUWSS meetings and from November 1913 was used on the front page of the NUWSS paper, ‘The Common Cause’.  However such was the strength of the image that it also had a lease of life in the US. 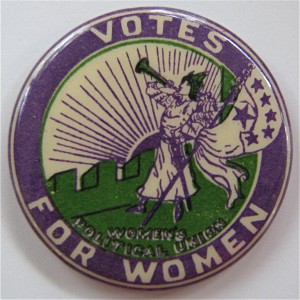 In his most useful and interesting book – Women’s Suffrage Memorabilia – Ken Florey reveals that Harriot Stanton Blatch, daughter of Elizabeth Stanton and a long-time resident in England, poached Caroline Watts’ ‘Bugler Girl’ design for use by the Women’s Political Union, the WSPU-inspired society she had founded on her return to the USA. Significantly the design was recoloured in purple, white and green (colours of course, borrowed from the WSPU) and became a well-known icon of the US women’s suffrage movement. [See here for more information from Ken Florey on the use of the design in the USA and here for a 2011 article about a contemporary reinterpretation of the image.]

Caroline Watts may well have produced other designs for the suffrage campaign but the only other that I can find reference to is held in the Artists’ Suffrage League archive in the Women’s Library@LSE. It is catalogued as ‘[Liberty] Original drawing, ink on paper, a woman freed from her chains, opening a door and looking out on to a sunrise; inscription below image “But little do or can the best of us:/That little is achieved through Liberty./Who, then, dares hold  emancipated thus -/His fellow shall continue bound? Robert Browning”. Signature bottom left “CM Watts‘”‘

I have been unable to discover much more about Caroline Watts’ life. In 1911, presumably an NUWSS supporter, she didn’t boycott the census, and can be found living with Mary, who was still indexing, at Hillcroft, Oakdene Road, Godalming. Caroline described herself as ‘Artist (Painter and Black and White Illustrator). I have been unable to find any trace of her work as a painter passing through the salerooms.By 1918 the sisters had moved to Middlehill Road, Colehill, Dorset, where Caroline died, aged 51, in 1919.

This entry was posted on December 3, 2014, 9:38 am and is filed under Suffrage Stories, Women Artists. You can follow any responses to this entry through RSS 2.0. You can leave a response, or trackback from your own site.