Kate was at this time 36 years old, living in Claverton Street in Pimlico and working in the Knightsbridge headquarters of the New Constitutional Society for Women’s Suffrage. It was now nine years since she had become engaged to (minor) actor John Collins. Her father died in March 1914 and her mother and sister, Agnes, now all but penniless, are living in rented rooms in Worthing. John and Kate have joined them there this weekend.

Windy, rain early and then it cleared up. All 4 out to the shops and Parade and John photographed us on the Beach. Lunch at 1 o’clock, but no bus turned up for the train we had arranged – so we walked to the station and carried our things and caught the next train – 3.5 – had to change at Brighton – it was very crowded.

[Back in London] I came in and unpacked finding all serene at Claverton Street – then John came in and saw me in the Peckham train at 7 o’clock. He wanted to come but I couldn’t let him – he will get bored of suffrage.

We had rather a peculiar meeting – only myself, Miss Raynsford Jackson – not much good in the open air – and Mrs Fox from Hounslow who made the crowd shout and I had to get up in the end and smooth down. I had to speak again at some length.

Miss R.J and I came back in the train. I got out at the Embankment and walked from there. In at 10.30. Bread and cheese and ham with tomatoes which I had brought up from Worthing. then bed. felt very tired.’

As a paid employee of the New Constitutional Society for Women’s Suffrage, Kate was kept busy organising ‘Votes for Women’ meetings in the London suburbs. This one at Peckham was, as Kate tells us, held in the early evening in the open-air.

Louisa Raynsford Jackson was c 56 years old – and a volunteer speaker for the NCS. Her sister, Mrs Barbara Kerr, who lived in the wealthy enclave of The Boltons in Kensington, was one of the NCS’ leading supporters.  Their father had been a prosperous Blackburn textile manufacturer, whose house, Clayton Grange, had been burned down by cotton workers in 1878, during riots protesting against a 10% cut in wages. 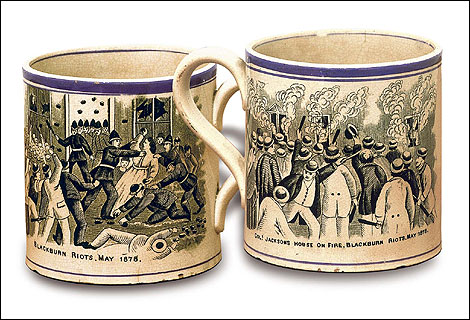 Years later Mrs Barbara Kerr inquired in Blackburn if any one could find for her one of these mugs.

This entry was posted on July 6, 2014, 11:02 am and is filed under Uncategorized. You can follow any responses to this entry through RSS 2.0. You can leave a response, or trackback from your own site.