Advertisement from ‘Votes for Women’, 1912

In 1912 Mrs Evelina Haverfield gave her imprimatur to the ‘Omne Tempus’ Raincoat – ‘The Ideal Coat for Town, Country or Campaigning’.  As Kate Frye records in Campaigning for the Vote  (my forthcoming edition of her diary), the suffrage organiser was forced to contend with all weathers as she tramped from door to door, canvassing for support for her society. On a typical wind-lashed and rain-soaked day she then had the prospect of returning to dank digs, to a room that offered few facilities for drying a sodden, mud-splashed skirt. A coat – suitable for ‘all times’ –  guaranteed by the manufacturers to keep out the rain – was a very necessary requirement for the suffrage campaigner. Kate, in fact, favoured Aquascutum; Mrs Haverfield put her faith in Samuel Brothers.

Evelina Haverfield (1867-1920) was the younger daughter of 3rd Baron Abinger. An adept sportswoman, she married young and  had two sons. After his early death she remarried and for two years during the Boer War was with her second husband in South Africa, where she set up a retirement camp for horses left to die on the veldt. By 1908, with the second husband no longer on the scene, she was a suffragette, a member of – and generous benefactor to – the Women’s Social and Political Union. She was particularly keen on appearing on horseback – riding astride in suffragette processions – often with Vera Holme, with whom she formed a life-time partnership.

Mrs Haverfield’s collaboration with Samuel Brothers of Ludgate Hill was clearly very suitable. The manufacturers of the ‘Omne Tempus’ were – and are still – military tailors. During the First World War Mrs Haverfield,  was one of the founders of, first, the Women’s Emergency Corps and then the Women’s Volunteer Reserve, a militaristic organisation, the members of which sported khaki uniforms and felt hats. She was commandant of the WVR and the writer Christopher St John described her as looking ‘every inch a soldier in her khaki uniform, in spite of the short skirt which she had to wear over her well-cut riding breeches’. See here for Mrs Haverfield’s defence of the WVS uniform as ‘useful and sensible’ and her dismissal of much current fashion as ‘ridiculous and preposterous’. 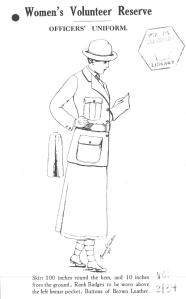 I wonder if the WVS uniform  (for details see here) – modelled on male military attire and certainly made in London – was manufactured by Samuels Brothers? It did initially excite a great deal of controversy- see here, for instance – but as the war wore on lost the power to shock. Indeed, ‘civilian’ fashion was soon influenced with, as the Daily Graphic (7 June 1915) put it,  ‘military touches charmingly introduced’.

From 1915 Mrs Haverfield, with Vera Holme, promoted the Serbian cause, both in that country and in England. She was working in Serbia in 1920 when she contracted pneumonia and died.

For more information see the entries on Evelina Haverfield and Vera Holme in Crawford, The Women’s Suffrage Movement: a reference guide.

This entry was posted on January 21, 2013, 11:12 am and is filed under Suffrage Stories. You can follow any responses to this entry through RSS 2.0. You can leave a response, or trackback from your own site.