Suffrage Stories: The WSPU Photographer, DORA And The Nazis

If you care to look at the  entry ‘Photographs and Photography’ in my Women’s Suffrage Movement: a reference guide’ – you will discover that F. Kehrnhahn & Co of Bexleyheath were the publishers of a variety of  real photographic postcards depicting key WSPU occasions.  For instance, see here the firm’s picture of WSPU members tricked out in 18th-century attire, designed by Sylvia Pankhurst, as they (wo)manned their stall at the 1911 Christmas Fair.

But who was ‘F. Kehrnhahn’, whose name sat a little incongruously alongside ‘Bexleyheath’? The answer is another intriguing ‘Suffrage Story’.

Ferdinand Louis Kehrhahn was born in Birkenhead in 1883, christened at Tranmere, Cheshire, in 1884 and by 1911 was living with his parents and younger brother, Frederick, at 303 Broadway, Bexleyheath. His father, a watchmaker, had been born in Germany and his mother in Sheffield. On the census form Ferdinand described himself as a ‘Traveller & Photographer’ and Frederick as a ‘Photo Postcard Producer’. 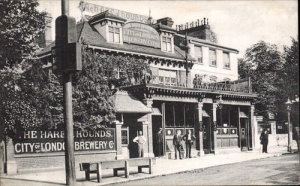 The brothers, as one might expect, produced a great number of topographical postcards showing scenes in Kent and in London and, at some point, had made contact with the WSPU. I note in my book a number of WSPU occasions – and a number of individual WSPU members –  photographed by F. Kehrhahn. I now realise that this was probably something more than a purely commercial arrangement and that there may have been a real coincidence of sympathy between the Bexleyheath photographer and the militant wing of the suffrage movement.

For I have now discovered that during the First World War Ferdinand Kerhahn was an internee. From 1916 he spent some time  in the Islington internment camp, which was housed in a former workhouse. The vast majority of the inmates – c 700 – were,  according to Hansard (20 Dec 1916),  alien enemies, but, in addition, the camp held 39 British subjects and 7 alien friends, held there under the Defence of the Realm Act. Presumably Kehrhahn, who had been born in Birkenhead, was one of those 39 British subjects.

But how had he fallen foul of DORA? The answer lay in his membership of the radical ‘anti-war’ wing of the British Socialist party. In November 1916 he managed to escape from internment and reached New York before being arrested and returned, c April 1917, to Brixton prison [see Hansard 29 Nov 1917].

In the inter-war period Kerhahn, who had now changed his name to ‘Kerran’, was a leading member of the Communist Party, working alongside such former suffragettes as Sylvia Pankhurst, Dora Montefiore and Helen Crawfurd. Apparently, although I have not verified this, before the outbreak of the Second World War Ferdinand Kerran was working in Germany, helping Jews to escape and listed by the Gestapo as an enemy of the Nazis.

And so, when, on the suffrage trail, you view pictures of maidens in mob caps standing by their stalls ready to sell gewgaws for the Cause, your eye should travel back through the camera into the mind of the photographer where, biding its time, was the desire that capitalism should be overthrown.

Ferdinand Kerran, who had married Lily Chris in 1919, died in Hampstead in 1949.

This entry was posted on January 17, 2013, 10:58 am and is filed under Suffrage Stories. You can follow any responses to this entry through RSS 2.0. You can leave a response, or trackback from your own site.