Posted by womanandhersphere in Suffrage Stories on August 23, 2017 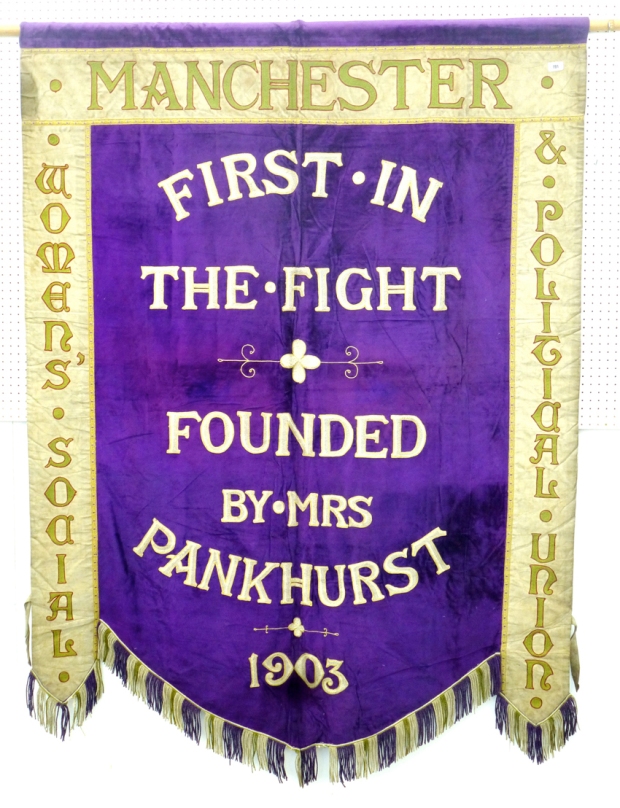 A couple of months ago I was astounded to spot the appearance of this banner in the catalogue of a Leeds auction house. It seemed impossible that such an important item of suffrage memorabilia should suddenly surface in this way.

Having been in the business of dealing in books and ephemera for well over 30 years I have a deeply-rooted suspicion of anything that looks too good to be true. It probably is. It seemed unlikely that anyone would go to the lengths of faking this banner..but one never knows. But if it was ‘right’, what a fantastic survival.

Everything did look ‘right’ – see the wonderfully period lettering – and the banner is documented. The Manchester Courier, Monday, 22 June 1908, describes its first unfurling – on the previous Saturday in Stevenson Square, Manchester. The report describes the banner as having the words ‘”The Women’s Social and Political Union” printed in a white border flanking a purple centre where the motto is “Manchester First in the Fight” and “Founded by Mrs Pankhurst’. Although by 1908 WSPU headquarters was centred in London, here was Manchester claiming its rightful place as ‘First in the Fight’. For it was at a meeting at Mrs Pankhurst’s house at 62 Nelson Street, Manchester, that the idea for the new society had emerged on 10 October 1903.

The banner was unfurled to the skirl of bagpipes and received eulogia from Rona Robinson and Mary Gawthorpe. The woman who was given the honour of unfurling the banner is noted merely as ‘Mrs Scott’. I think this must be the Mrs Rachel Scott who had been present at the first meeting of the WSPU – and subsequently was appointed secretary – rather than Mrs Rachel Scott, wife of C.P. Scott, editor of The Manchester Guardian…..but more investigation is needed here. And then, to add a final flourish to the occasion, Victor Grayson MP made a speech, declaring that ‘he was prepared to sacrifice himself on the altar of woman’s ideal’.

Of course I toyed with the idea of bidding for the banner. Such an item is incredibly scarce – the last one I know to have been for sale on the open market was auctioned in the early 1980s. It went to a very knowledgeable American collector and is now in the collection of a US university . But it was obvious that the perfect home for Manchester’s WSPU banner would be the People’s History Museum in Manchester. Surely it was really much more sensible, even if not the most smart business decision, to alert them to its existence in the hope that they would be able to bid for it themselves?

The People’s History Museum had known nothing of the forthcoming auction and were thrilled at the prospect of the possibility of acquiring the banner. Thus, on the day of the auction, representatives from the Museum went over to Leeds and, when viewing the banner, discovered, not only did it look and feel ‘right’, but that it still had attached the label of the maker, Thomas Brown, a well-known Manchester banner maker of the period.

The story that slowly emerged about the recent history of the banner is the stuff of dreams.

It had been given to  a small independent charity shop in Leeds about ten years ago and had been in a cupboard ever since. The charity looks after elderly people in the local area and apparently it had been left to them, along with the other contents of his house, by an old man with no family. His mother had come  to Leeds from Manchester in the 1930s. Her name was believed to be ‘Edna White’, but it isn’t known how she came to have the banner.

I followed the auction on-line and was horribly disappointed when it became clear that the PHM had reached their upper bidding limit and that the banner had been bought by another party for £13,600 (plus all the auctioneer’s premiums, VAT etc).

However, all is not lost and that ‘other party’ is prepared to sell the banner to the PHM for a sum that gives him a not entirely unreasonable profit. The museum has been awarded funds from various bodies to cover a substantial part of this sum, but needs to raise a further £5000 to be able to complete the purchase.

As a result The People’s History Museum is Crowdfunding to ‘Bring Manchester’s Suffragette Banner Home’ – see here for details. I’ve made a contribution. Will you?