Posted by womanandhersphere in Uncategorized on April 3, 2020

Part of Kate’s diary entry for 9 January 1915, in which she describes her wedding day. It was she who attached the photographs of herself and John.

Kate Frye’s diary, which she kept from the late 1890s until 1958 is very much the diary of a middle-class, albeit impoverished, ‘Everywoman’ of that period. Her experiences, although so particular to her, were shared by millions of others. Thus it was that, in 1919, she had a first-hand encounter with the Influenza – ‘Spanish ‘Flu’ – Pandemic, which, because it could prove quickly lethal, was rightly feared.

John Collins, husband of Kate (nee Frye) had come through the First World War, collecting a Military Cross on the way, and they were about to settle back into civilian life in a small rented flat in Notting Hill when, in February 1919, disaster struck.

On 12 February, to Kate’s horror, John was rushed to hospital – ‘The Prince of Wales Hospital in Marylebone. The old Great Central Hotel where our brief honeymoon was spent.’ The hotel (now the Landmark Hotel,  had been taken over in 1916 by the War Office and turned into a military hospital for officers. ‘I had heard the doctor -“Influenza and pneumonia – both lungs”. ‘He is very ill, it is a toss-up if he pulls through.’

The Winter Garden, Great Central Hotel, Marylebone – a postcard kept by Kate all her life as a memento of her one-day honeymoon

So, rather than home-making, Kate’s first days back in London revolved around visits to the hospital.

To Hospital 1.45 up to day sister’s room as she had promised the doctor’s report. But she was frightfully cross and rude to me. Sat with John 2 till 4 then was turned out. He looks very bad and is lying propped up by a back rest and in a pneumonia jacket. He is quite sensible but I would not let him talk much. They are frightfully rushed and not enough sisters – 800 patients and many dying of pneumonia.

A ‘pneumonia jacket’ was used to warm the patient’s chest, then one of the few treatments available.

No one can ever know but those who go through it what these hours of waiting are like and then the Hospital with its inhospitable airs and snubbing attendants. They are bound to answer enquiries concerning the ‘serious’ cases but that is as much as they will do. I stayed until I was driven away. He hates me to go and to leave him like that was so distressing.

Anecdotally, the hospital was not a happy place and, following the ‘flu outbreak, complaints were made in Parliament that patients with flu were being nursed in the same rooms as those recovering from wounds, thus causing a serious possibility of the infection spreading.

John remained in this Marylebone hospital for a month and then, having more or less recovered, was sent to a military convalescent home in Bournemouth. It was housed in the former Mont Dore Hotel (now Bournemouth Town Hall). Kate followed him, staying in digs.

John had been before a Board and been granted 3 weeks sick leave, so that is alright – he is due to leave the Mont Dore today but can arrange to stay until Monday.

[Back to London flat] It is very wonderful to be home in our dear little flat and with John practically well again.

Kate’s diary is now housed in the Archives of Royal Holloway College, University of London. I only transcribed a few of the Influenza entries when writing her biography – Kate Frye: the long life of an Edwardian Actress and Suffragette – published as an ebook by ITV – see https://tinyurl.com/qn7rhxq. More useful information can be found in the diary if anyone is writing a study of the Post World War One influenza pandemic. 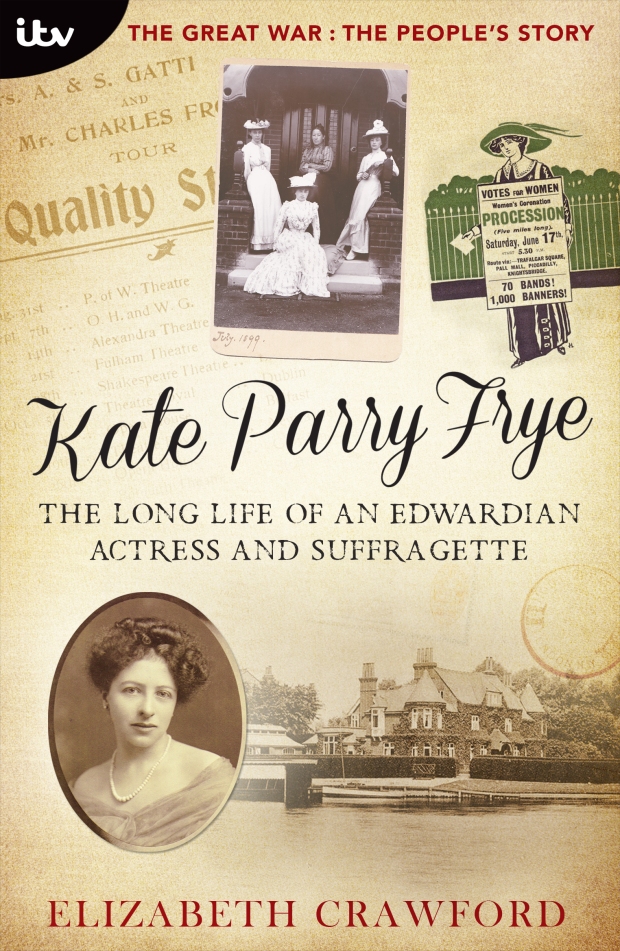