What Mariana Starke’s Great-Grandfather Was

Posted by womanandhersphere in Mariana Starke on August 1, 2012

Mariana Starke’s great-grandfather was a Virginia landowner and slave trader. 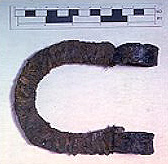 In the last ‘Mariana Starke’ post I gutted the red herring that had Mariana born in India. This, if a red herring could be said to be put to such a use, had been a hook on which some scholars had hung critiques of her two Indian-set plays. While I am certain that an interest in Anglo-Indian affairs permeated Hyland House, which had been purchased with the proceeds of her grandfather’s engagement with India, I am wondering if the shade of Thomas Starke, her great-grandfather, did not also, perhaps, linger?  If so, that may well give an added spice to the abolitionist sub-plot of The Sword of Peace (1788) and to two of Mariana’s creations in it, the slaves Caesar and (offstage) Pompey.

Thomas Starke (c 1649-1704), was probably born in Suffolk and in the early 1670s spent some time in Kings and Queens County, Virginia, where he (and perhaps another member of his family) owned land  – land devoted to tobacco production. On his return to England he married Sarah Newson, possibly in 1676 at Pettistree in Suffolk. Those facts are interesting – if a little hazy – but what is definite is that by 1678 the family was living in London, in the parish of St Dunstan in the East, where a son was christened. Their surviving children – several died in infancy – included Mariana’s grandfather, John (1685-1765) and several daughters, some who were to make alliances with fellow merchant families.

The Starkes lived in Mincing Lane, in a house built after the recent Great Fire. The premises also served as Thomas’ counting house; I will relate more of this interesting establishment in a subsequent post.

The counting house was the hub of Starke’s business empire; he is first recorded as importing tobacco (24,252lb) from Virginia in 1677. Many of the records regarding his business may be found here. The ships plying the Atlantic to pick up the tobacco did not, of course, travel empty, but carried over a wide variety of goods to tempt the settlers. On 10 October 1677, one of Starke’s ships – the  Merchant’s Consent – set sail for Virginia carrying, amongst other consignments, 2 cwt nails; 10 lbs Norwich stuffs; 5 doz Irish hose; 35 lbs wrought brass; 1 cwt hops; 1 small saddle; 3 castor, 2 felt hats; 3/4cwt haberdashery wares (to a value of  4s 6 1/2d) . On another occasion Starke’s consignment included ‘Indian cargo’ – that is tomahawks to sell to Indians – plus clothing, hardware, flints and gunpowder.

By 1679 Starke was sufficiently prosperous to be admitted as a freeman of the Haberdashers’ Company and by 1686 was the third largest importer of tobacco in London. As the owner of tobacco plantations he would have been well aware of the problem of finding labour to tend the crop; the number of indentured white servants was declining and the importation of slaves from Africa had been interrupted by the 1689 war with the French. In 1692 he found a solution, heading a group of London merchants that petitioned for the right to send a ship (the Concord) to the Guinea coast to transport slaves back to work on their plantations in Chesapeake.  After that, Starke’s ships  – such the Endeavour, African Galley and Two Brothers -regularly plied the triangular route between London, Africa and Virginia. Fortunately for us such ventures frequently did not go to plan and resulted in litigation, because it is in the case reports that details of Starke’s business are laid bare.  For instance in 1698, with others, he charted the African Galley, for a voyage first to Guinea, travelling on to Maryland or Jamaica. However, the ship’s master was very slow in fitting out the vessel and, to compound his disobedience, called in at St Thomas, off the Guinea coast, delaying arrival in Virginia until July 1699, where he then stayed, rather than going directly to Maryland to deliver the Guinea cargo. The case was brought to recover the monies lost because many of the ‘negroes’ died as a result of the delays and because much of the cargo was carried off the ship by the crew and sold for their own benefit. Similarly, in 1700 Starke charted the Two Brothers  for a voyage to Guinea and Virginia, putting on board in London a cargo sufficient to purchase 400 ‘negroes’, There was some dispute and the ship’s master refused to leave until three weeks after ship was ready to sail. As a result, by the time they got to Guinea, they were forced to pay very high prices for the ‘negroes, since many vessels had arrived before them and got the best of the trade. They obtained only 75 slaves, 16 of which [sic not ‘whom’] the master maintained were for his own account’. Starke brought the case because he doubted that he would ever see some of the money earned from the sale of the ‘negroes’. It is now a truism, but the ledgers in that Mincing Lane counting house noted only the financial, not the human, cost.

As luck would have it, it is one of Thomas Starke’s ships, the Henrietta Marie  that has, more than any other project, been responsible for exposing the intimate horrors of the late-17th-century slave trade. The ship left London in September 1699, travelling to the Bight of Biafra, buying there about 235 slaves, of whom 190 survived to disembark at Jamaica on 18 May 1700. The Henrietta Marie was then shipwrecked off Key West, Florida, lying forgotten on the sea bed until 1972, archaeological research finally beginning in 1983.  It is the earliest shipwrecked slave ship to be identified by name and it is this fact that has allowed for extensive archival research – in addition to the study of the recovered artifacts.

Among these many objects are a large number of shackles – which require little explanation – and thousands of glass beads, which perhaps might. Beads were the currency in which slaves were bought.  Thomas Starke had consigned a quantity of these beads to the Henrietta Marie and the bartering had presumably been so effective that the beads brought up the from the sea bed 300 years later were those that were surplus to requirements. Analysis by shape and colour has helped unravel another mystery of the slave trade. Thus, in the ledger in that Mincing Lane counting house, the entry for so many ‘Venetian glass beads’ would have its contra,  ‘negroes’.

Thomas Starke died in 1705, leaving a number of law suits unresolved with which his widow and son were forced to grapple. That son, John, Mariana’s grandfather, may have paid one visit, in 1707, to the 920 acres his father had held in Virginia at the time of his death, but then, c 1710, rejected the West for the East, sailing to India as purser on an East Indian merchantman, Averilla. The motivation is unexplained, but it is salutary to note that in his will, dated 1763, John Starke left £2000 [2012 = £229,000] to the Incorporated Society for the Propagation of the Gospel, specifying that part of the money was to be applied ‘by the Society towards such charitable purposes as they shall judge most efficacious towards converting the savage Indians in our American colonies and late Acquisition’ [ie territory gained up to the Mississippi following victory over the French in 1763]. It seems as though John Starke felt the necessity of making amends – one takes it that conversion to Christianity was intended as a gift – to at least one group affected by his family’s business dealings in North America.

It is hardly worth mentioning that in 2012 we surely know far more about Thomas Starke’s trade and the contents of his ships than his great-grandaughter ever did. But something of his acumen and derring-do – and, I imagine, his irascibility and ruthlessness – may have passed into family legend.

For further reading on the 17th-century slave trade, in which glimpses may be caught of Thomas Starke, see here, here and here.