WALKS/Suffrage Stories: Where And What Was ‘The Votes For Women Fellowship’?

Posted by womanandhersphere in Suffrage Stories on November 12, 2012 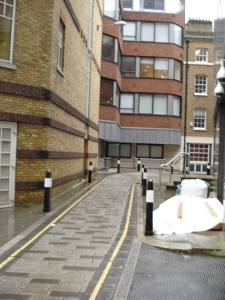 Red Lion Court. The site (on the left) of the offices of the Votes for Women Fellowship

To mark the very welcome co-operation planned for the future between the Women’s Library and the London School of Economics the next few ‘Suffrage Stories’ will demonstrate the past importance to the women’s movement of streets and buildings in the vicinity of  Houghton Street.

During the Pethick-Lawrences’ absence Mrs Pankhurst had moved the WSPU from Clement’s Inn to Lincoln’s Inn House on Kingsway (about which I will write in a later post). In fact I rather think, from studying the relevant rate book, that the WSPU may actually have been evicted from Clement’s Inn. After their expulsion from the WSPU the Pethick-Lawrences took back their paper, Votes for Women, and continued to publish it, on their own account, from a new office. Again, it may have been that after their imprisonment they were no longer welcome to the Clement’s Inn  management company.

For whatever reason, the Pethick-Lawrences moved a little to the east of Clement’s Inn and set up office in 4-7 Red Lion Court, one of the quaint passages off the north side of Fleet Street. Despite the redevelopment that has swept away their office, the narrow court is still atmospheric. The office was close to Votes for Women‘s new printer in Whitefriars Street, off the south side of Fleet Street. The first issue of Votes for Women published from this address was that of 25 October 1912.

In addition, in Red Lion Court, on 1 November 1912, the Pethick-Lawrences made their paper the centre of another suffrage society, the Votes for Women Fellowship. This group, made up of former members of the WSPU who were no longer in sympathy with the Pankhursts’ tactics, aimed to promote the paper and its policies rather than stand as a new militant organisation. In Emmeline Pethick-Lawrence’s words the Fellowship was ‘giving full expression to the awakened militant spirit of womanhood, that they should associated themselves in various plans for carrying the message far and wide, until in every town and village of this land women realise that they are a living part of a spiritually militant sisterhood that is at war under the triple banner of liberty, compassion, and purity against every form of evil dominance. (Votes for Women, 8 November 1912). The Fellowship’s emblem was of a lady with a lamp and its motto was ‘To spread the Light’.

Without the backing of the WSPU, Votes for Women had a greatly diminished circulation and in 1914 the Pethick-Lawrences gave the paper to the newly-founded United Suffragists. Although there was an overlap of membership, it would be a mistake to construe the United Suffragists as a direct descendant of the Votes for Women Fellowship. Despite being for most of the time in dire financial straits, Votes for Women continued to be published throughout the First World War only ceasing publication in February 1918 when the vote was (partially) won.