Posted by womanandhersphere in Suffrage Stories on July 4, 2013

Some time ago, when researching a talk,  ‘No Vote No Census’, that I gave in October 2011 conference on the 1911 census organised by the National Archives, I came across the boycotting census form of Mrs Frood of Topsham. Since then I have passed on this discovery to a researcher associated with Topsham Museum who has been able to link Mrs Frood directly to the 1913 Suffrage Pilgrimage, the 100th anniversary of which is being celebrated in Topsham today, 4 July 2013.

The 3 March 1911 edition of Votes for Women contains a letter from Mrs M.C. I. Frood of Station Road, Topsham,  in which she described how, early in the morning of the polling day for the last election (which must have been Dec 1910/Jan 1911),  she went out with a pot of ‘good, white oil paint’ [I like the fact that it was ‘good] and ‘printed on the inner edge of the pavement along which voters would pass on the way to the polling station ‘Taxation Without Representation is Tyranny’ and ‘Britons never, never, never shall be slaves. I also printed it along the brick wall of my field, which they also had to pass coming and going to and from the train. ..On the large doors of my field, near the same spot, I printed ‘No Votes No Taxes’. I find my field gate a useful place to stick cartoons and cuttings from Votes for Women.’

A month later Mrs Frood was one of those suffragettes who boycotted the 1911 census. Together with one of her daughters, her servant, Beatrice Hutchings and six unknown females, to whom she had clearly given boycotting shelter, she refused to fill in any details on her census form, writing across it ‘If I am intelligent enough to fill up this paper, I am intelligent enough to put a cross on a voting paper. No Vote No Census.’

The census enumerator, Mr.H. J. Baker, reported this act of civil disobedience to the Census Office and received a reply from its Secretary, Archer Bellingham, instructing him to fill out the form with the best information he could muster. Mr Baker then annotated the letter, quoting Mrs Frood as saying to him that she had had  a ‘house full’ of boycotters on census night – and ‘that I am therefore adding to Numbers 6’.  With this number revealed as an arbitrary choice of the enumerator, we can only speculate as to how many Topsham women spent the night at Little Broadway House in Station Road.

Although in 1911 it would appear that Mrs Frood, as a correspondent to Votes for Women, was a supporter of the WSPU, by 1913 she is listed in The Suffrage Annual and Women’s Who’s Who as secretary of the Topsham branch of the NUWSS. Perhaps she was one of those who were dismayed by the WSPU’s increasingly militant tactics. It was one thing to paint slogans (with ‘good’ paint’) on pavements and walls, but quite another to break windows and commit arson. So it was as a leading local NUWSS member that Mrs Frood took part in the Suffrage Pilgrimage in early July 1913.

Who was Mrs Frood?

Mrs Mary Catherine Isabella Frood (nee Campbell, c. 1856-1931) had been born of Scottish parentage in Canada and was living in New Zealand when, in 1878, she married James Nicholson Frood (d. 1913), an Irish-born doctor. She had five children, the first four, all daughters, born in New Zealand and the last, a son, born at sea c 1888 – presumably as the family was returning to England. One of her daughters, Hester, was successful as an artist. Although Mrs Frood actually died in London, her address was still in Topsham – 26 The Strand (Old Court House). 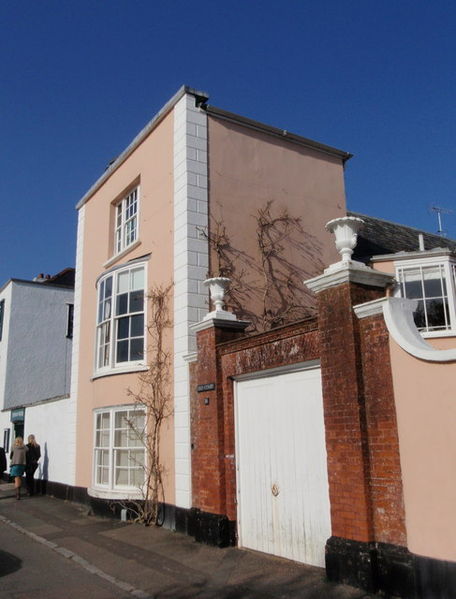 Dr Frood was living with his family (whose name was misrendered as ‘Froud’) when the 1901 census was taken.  But where was he in 1911? The name on the cover of the census form had been written as ‘Dr Frood’, but this had been amended to ‘Mrs Frood’ and it is she who is shown as ‘Head of Household’. I can find no trace of James Frood elsewhere in the 1911 census, although he did not die until 1913, his death registered in the local area. Interestingly under the terms of his will probate was granted to the Public Trustee rather than to his wife or any other member of the family.

Where was Little Broadway House?

Thanks to Street View I can see Station Road and the pavement along which Mrs Frood painted her slogans. Thanks to Paul Tucker (see Comment below) who tells me that Little Broadway House is still there – the house with the overhanging upper window that I can see in Street View – although now divided into two.  Presumably the ground to its side was Mrs Frood’s field. So let’s take a moment to visualise  its gates – decorated with Votes for Women cartoon – a reminder to those walking past on their way to the station that one Topsham woman was prepared to do her bit to win  ‘votes for women’.