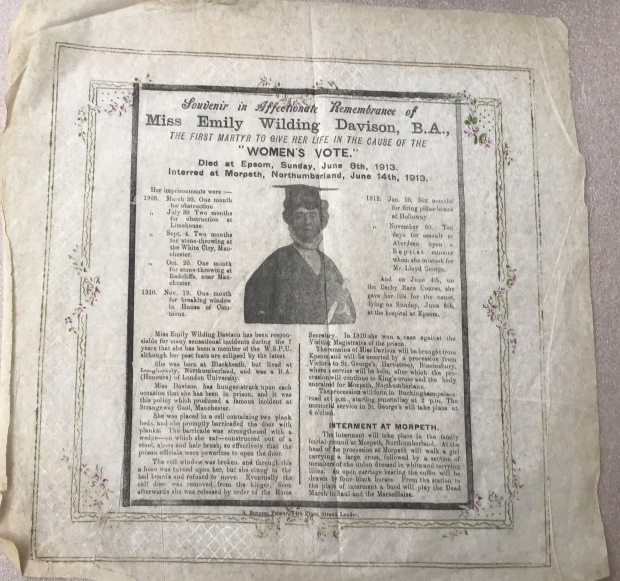 Over the years several tissue paper napkins, souvenirs of suffrage events in London, have passed through my hands and I’ve wondered what manner of woman was Mrs Sarah Burgess, whose name appears as their printer at, until 1911, 14 Artillery Lane, Bishopsgate, and then at 4 York Place, off the Strand. A 1908 Street Directory tells me that, trading from the Artillery Lane address, between a horsemeat salesman and a greengrocer,  she is ‘Mrs Sarah Burgess, manufacturer of paper switches, cut tissues, lace paper and shelf trimmings & confetti, and stationer, wholesale and export’.

An item in a newspaper titled Good Morning, 5 June 1945, tells a little more about Sarah Burgess. ‘The men who stand on the kerb in some of London’s principal streets and sell anything from a hairpin to a clock-work toy, all know “Auntie”. They have known her for a good many years, but none of them remembers the day she set up business.

She is Mrs Sarah Burgess, who in her shop behind the Strand (the street used to be called Of Alley, but is now York Place), supplies them with the novelties they sell to the passers-by. And she is eighty years old.

It is over 50 years since “Auntie” opened her ”swag” shop, and sold her first balloon to a street vendor. Since then she has been the friend of thousands of kerb-sellers and costers who havecome to her for toys, song-books, street guides, joke books, confetti….

Coronations, royal weddings and Peace Days are the high-spots of “Auntie’s” life.’

For, of course it was not just suffrage events that were commemorated by “Auntie” in her tissue napkins, but coronations, visits from foreign statesmen, the opening of Parliament etc etc. It is clear that, to mark a new event, the souvenir tissues could be issued very quickly.  I will have several of these (non-suffrage) tissues for sale in my forthcoming catalogue.

It has, however, been well nigh impossible to find out details of the life of Sarah Burgess. I believe, but cannot prove, that she was born c.1864 in the parish of St Luke’s, just of Old Street, and married a Charles Burgess, who had probably died by the time she set up shop. Charles and Sarah Burgess appear in the 1891 census living at 8 Ironmonger Row; she has no given occupation and his is indecipherable. At the turn of the century, when her sister- in-law was convicted of the manslaughter of her infant son, the Old Bailey record tells us that Sarah’s brother-in-law was a lithographic printer – and there were many other printers living nearby. . The Ironmonger Row area was home to at least one ‘novelty’ manufacturer,   Sparagapane, maker of Christmas crackers, the family business of Maud Arncliffe Sennett, a notable suffrage activist. I don’t know whether the proximity of this type of commercial activity had any bearing on Sarah Burgess’s chosen trade.

Tissue napkin commemorating the inspection by the King Emperor of Dominion troops, August 1919 £30

Souvenir tissue commemorating the march of Dominion troops through London, May 1919 £20

Tissue commemorating a  Royal Pageant on the Thames, 1919 £30

This entry was posted on September 12, 2019, 10:13 am and is filed under Uncategorized. You can follow any responses to this entry through RSS 2.0. You can leave a response, or trackback from your own site.