Suffrage Stories: Black And Minority Ethnic Women: Is There A ‘Hidden History’?

When the film ‘The Suffragette’ was released in 2015 there was a minor furore over the fact that no black and minority ethnic women were represented in the story. As one of the consultants on the film, I was asked to comment on this and, indeed, at the event held at LSE at which the director and one of the producers talked about the film, the first question from the floor was on this point. For a podcast of this event click here.

My message then was that the film was indeed a true representation of the ethnic demographic of the British women’s suffrage movement, which overwhelmimgly was comprised of white women. However, finding the subject so interesting, over the last couple of years I’ve done more research on the subject and, although I have nothing startlingly new to report, thought it might be interesting to set out my findings.

There’s no doubt that the birth of the women’s suffrage campaign is closely linked with the anti-slavery campaign, and hence with race. The first spark that ignited the American suffrage campaign, which pre-dated the British one, was actually struck in London, in the entrance hall of the British Museum. For more information on this aspect of the campaign, do read an article I wrote for the BBC website – From Abolition to the Vote. For my extended article on the subject see here.

When the British suffrage campaign was launched in 1866, as far as we know only one woman of colour signed the first suffrage petition. She was Sarah Remond, an African-American who lectured on anti-slavery and women’s rights. There is, however, little evidence of the subsequent involvement of black and minority ethnic women in the suffrage campaign. This is really not surprising since, although people of colour had long settled in Britain, they constituted a very small percentage of the population until after the end of the Second World War. Moreover during the period of the suffrage campaign men were disproportionately represented in this community, by, in particular, Chinese, West Indian, and African seamen who settled in London and other port cities and were then absorbed into British society. Women of their families tended not to travel with them.

It may be that black and minority ethnic men and women did support the women’s suffrage campaign but, because it is difficult to discover an individual’s ethnic origin, they are now ‘hidden from history’. At the time of the suffrage campaign census records only documented a person’s place of birth and this is no guide to ethnic origin because so many white British men and women were born in Africa, India, or the West Indies. It is necessary to search for other clues, such as the form of a person’s name. However no suffrage campaigner with, say, an obviously African or Chinese name has been noted and research is complicated because migrants from the Caribbean had, for reasons associated with the unhappy history of the islands, acquired surnames that made them indistinguishable from white British men and women. Only in newspaper reports might an individual’s ethnic origin be mentioned and, although the suffrage campaign occupied so much newsprint over the years, no such comments have been uncovered.

The only individuals of (part) Caribbean heritage whom one could say were to some degree supportive of the suffrage campaign were two men, Donald Adolphus Knight and John Richard Archer. Both were born in England to black sailor fathers and white British mothers.

In 1906 Knight stood by his wife, Adelaide, when she went to prison for demonstrating outside a politician’s house. Adelaide was white British and a member of the Canning Town branch of the WSPU. See here for a photograph of Donald and Adelaide Knight.

Twelve years later Archer, elected mayor of Battersea in 1913, the first black person to hold such a position in London, acted as election agent for Charlotte Despard, the leader of the WFL, when she stood as the Labour candidate for North Battersea in the 1918 general election. Actually I’m pretty certain that his support was more for Mrs Despard as a Labour party member than for her as a suffrage campaigner. I can find no evidence of Archer or his wife, Bertha (who was a Canadian of African descent) attending any suffrage meeting in Battersea nor is Archer mentioned in either of Mrs Despard’s biographies. It may be, however, that close scrutiny of local papers around Battersea just might uncover some direct connection between Archer and the suffrage campaign. I understand that a researcher, commissioned relatively recently  to comb through Despard’s diaries by an author interested in Archer, found no mention of him. What a pity.

It is likely that Archer did come into contact with another suffragette – Mrs Beatrice Sanders, the WSPU’s financial secretary. She lived with her husband at 18 Brynmaer Road, Battersea; Archer at no 55. Beatrice’s husband, William Sanders, was a LCC radical alderman and would surely have known Archer, with whom he worked closely in the Battersea Labour party many years later.

Historians have searched for visual evidence of the presence of black or minority ethnic men and women in the many hundreds of photographs that chronicle the suffrage campaign. Of these only a handful, featuring a few Indian women, demonstrate such an involvement. Of the women whose names we know all were of high social status. One, Princess Sophia Duleep Singh, was an active member of the WSPU, and is now the subject of a biography. The others, who were probably members of the WFL, include Mrs P.L. Roy (Lolita Roy), the wife of Piera Lal Roy, the director of public prosecutions in Calcutta, and her daughter, Mrs Leila Mukerjea. 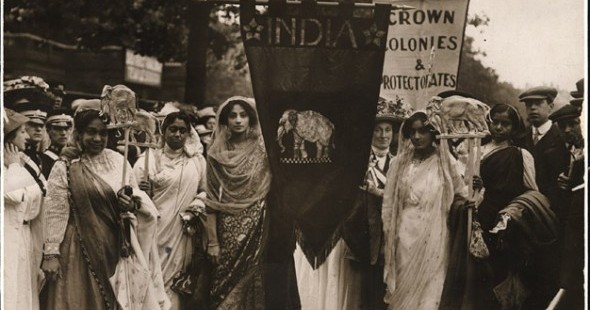 The India section of the 1911 ‘Coronation Procession’. It is likely that of the women in the photograph are members of the Roy family – Mrs Roy, Mrs Leilavati Mukerjea, and her younger sisters, Miravati (aged 21) and Hiravati (aged 15).

Mrs Roy had come to London with her six children in 1901, apparently for the sake of their education, and lived at 77 Brook Green, Hammersmith, close to St Paul’s School, where her sons were pupils. Her eldest daughter, Leilavati, married Satya W. Mukerjea in 1910.  Both women, along with Mrs Bhagwati Bhola Nauth, are definitely known to have taken part in the Indian section of the 1911 ‘Coronation Procession’. Indeed Mrs Roy was one of its organisers. It is likely that the other two young women in the photograph are Mrs Roy’s younger daughters, Miravati (aged 21) and Hiravati (aged 15).

In 1910 Mrs Roy was president of the London Indian Union Society (an Indian Nationalist organisation) and ‘Mrs Mukerjea’, presumably Leilavati, succeeded her in 1911. Mrs Jane Cobden Unwin, who was a co-organiser with Mrs Roy of the Indian section of the ‘Coronation Procession, also attended Indian Union Society functions.

At the end of the 19th century another Indian, Dadabhai Naoroji, elected in 1892 as Britain’s first ethnic minority MP, had been wholly supportive of women’s suffrage and was a member of the council of the Women’s Franchise League. Conversely, many British suffrage campaigners, like Jane Cobden Unwin, supported the nationalist movements in India and Africa.

Apart from this photograph and those in which Princess Sophia Duleep Singh appears I have seen no evidence of the presence of BAME women in attendance at any suffrage event – either as protagonists or as onlookers. However, I hope that, as the spotlight is shone more intensely on local histories of the suffrage campaign, something more of the involvement of BAME women and men will be revealed. Do let me know of anything you uncover.

This entry was posted on July 24, 2017, 8:57 am and is filed under Suffrage Stories. You can follow any responses to this entry through RSS 2.0. You can leave a response, or trackback from your own site.