By the summer of 1897 alterations had been made to The Plat, the house leased by Frederick Frye on the banks of the river Thames at Bourne End. It was substantially expanded, acquiring two circular-roofed turrets which housed additional reception and bed rooms. Now, for the first time, the family – Frederick, his wife, Kezia, and their daughters, Agnes and Kate  – were to spend Christmas there. In past years they had come down from London to stay for Christmas at the much grander home of Aunt Agnes Gilbey at Wooburn – a short distance from Bourne End. On these occasions Kate Frye had moaned in her diary about the boredom she had endured but now, in 1897, she was at last able to enjoy a Christmas untrammelled by another family’s conventions.

I have bought Mother a jolly purse and today I have bought Agnes a silver thimble in a case – a thing she very much wants. Daddie a splendid pocket book – a real beauty and a pair of braces. The servants – Cook a purse – Emily a writing case – Alice a work case and Lotty Grey, the new microbe [such was the epithet Kate used at this time for the ‘tweenie’ maid] a silk neck handkerchief.  Mother has  bought Agnes a gilt chain purse by special request and me by desire a travelling case holding boot cleaning appliances, brown and white cream and brushes and leather. [We have bought] 10 shillings’ worth of toys from Aunt Anne’s [charity] bazaar for our Tree – a fairy for the top – glass balls amd birds – drums – trumpets and penny toys of all kinds and many more little things. Small hampers and drums filled with cottons, needles etc for the Servants as extras.

Directly after lunch Agnes and I started on the Christmas Tree. It is such a beauty and touches the Drawing Room ceiling. We did up part of the presents – the principal ones in coloured papers. Just as we were in the midst of it Constance and Katie [daughters of Aunt Agnes Gilbey] arrived down – we just let them peep in the room which was in a fine muddle. .. Aunt Agnes’ presents arrived in the evening – a huge lampshade for Mother and two pairs of silk stockings each for Agnes and I – such beauties – couldn’t have chosen anything nicer. We were obliged to look at them – then wrapped them up for the Tree. We allowed Mother in the room but she didn’t assist but Daddie we couldn’t allow in much to his annoyance really. The Tree looks lovely – it ought to be a huge success. I have never seen one look nicer and it is simply crammed with things.

It was a beautiful morning though still most bitterly cold – ever so many degrees of frost – and we went out – the three of us – to try to get warm – the house is icy. It was very foggy early but the sun broke through and it was lovely..Then went up to Cores End for Mother to go and see old Mrs Nicholls and leave her Christmas present. Directly after lunch the three of us started decorating till four o’clock. Pratt [the gardener] cut up the Holly and we put it and lots of mistletoe up everywhere – except Daddie’s room – he is most disagreeable just now.  Our turkeys haven’t arrived – they were to come from Leverett and Fryes at Finchley with lots of other foods. [Leverett and Frye was Frederick Frye’s grocery firm.]

[The Fryes’ rather glamorous friends, Norman and Stella Richardson, arrived from London to stay for the festivities.] Norman has brought us two lovely boxes of Fuller’s sweets and also presented his and Stella’s Christmas present to us in the evening. His is a silver backed manicure rubber each to Agnes and I and Stella’s a work bag made by herself each – such nice ones. Of course we won’t let them see the Tree – they are very funny over it and pretend to be very curious. We were all very jolly in the evening except Daddie.

Agnes and I were called at a quarter to seven and got up and went to early service at St Mark’s Church. There were not many people. It was bitterly cold and very foggy. We didn’t have breakfast till about 9.30 as Mother and Daddie were late. Norman was down before we got in and Emi soon after but Stella of course had her breakfast in bed and had a fire to get up by. Mother, Emi and I walked to Wooburn Church for morning service – Agnes would have liked to go with us but went for a walk to Maidenhead with Stella and Norman  – they were to see Mrs Quare and came back to lunch in a fly.

We met Katie just as we were going in Church so she made us go up to Aunt Agnes’ pew as only she, Aunt Agnes and Constance came to Church. I did enjoy the service – it was so bright and I think the Vicar is so nice. It was quite like old times and I felt we must be staying with them  – especially as we walked up the hill with them after Church. It was simply lovely up there – no fog and perfect sunshine – quite thawing the frost on the treees it was so hot. We saw Southard and Gilbert [Gilbey] who has not been at all well – then Aunt Anne [a sister of Agnes Gilbey and Kezia Frye, Kate’s mother] came in – we had already met her on her way to Chapple [sic]. Then after a chat and inspection of everyone’s presents we came away home. Met Mrs Southard & Henry and Lola and her maid walking up the Hill. They had just got back from Marlow where they drive to church.

We had a quiet afternoon round the fire in the Morning Room – can’t let anyone in the Drawing Room as the Tree is there. I slipped off after tea to finish it all off. We have got up fair fun and excitement over it – and made them all curious. We were all very merry at dinner – except Daddie who is still seedy – although we had no Turkey. Had a pair of our own fowls killed as they have not arrived – I don’t like Christmas dinner without Turkeys – but we had the Pudding, mince pies and crackers alright. Then came the Christmas Tree which was a huge success and we all went quite mad. 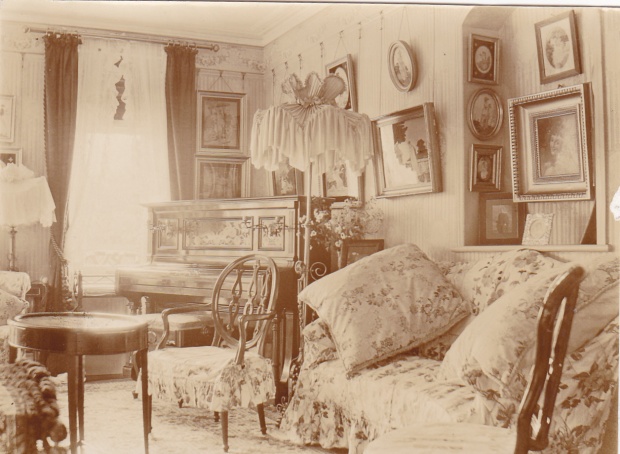 The Drawing Room at the Plat. I wonder where the Christmas Tree stood in 1897?

We had the servants in at the beginning and gave them their presents – Pratt has had a splendid knife off it. We played all the musical instruments and with all the toys. Then after we had carted our things away we went in the Morning Room again in the warm. Daddie went to his room and went early to bed – he has given the servants each a present of money. We had snap dragon later on but I got most fearfully tired and was glad to go to bed. We all went off about 11.30.

The Plat – the cosy Morning Room

We sat in the Morning Room round the fire – the Drawing Room is such a cold room and looks so miserable with the huge Christmas Tree stripped of all its glory. After tea Norman read ‘Alice In Wonderland’ aloud nearly  through to us and we sat round and roared – it is a lovely book I think – most awfully clever.

For a Happy & Prosperous New Year’

For the whole story of Kate’s life – as told in her diary – download this e-book  from iTunes – : http://bit.ly/PSeBKPFITVal or from Amazon. It would make a good read over the Christmas period.

This entry was posted on December 22, 2015, 11:36 am and is filed under Kate Frye's Diary. You can follow any responses to this entry through RSS 2.0. You can leave a response, or trackback from your own site.