Suffrage Stories/Collecting Suffrage: Countdown To 12 October And Release Of The Film ‘Suffragette’: The WFL ‘Holloway’ Brooch

To celebrate the release on 12 October of the film ‘Suffragette’  (for which I was an historical consultant) I will post each day an image of a suffrage item that has passed through my hands.

For my current catalogue – No 189 – which contains a good deal of suffrage material – as well as general books and ephemera by and about women – see here.

This is the award that was given by the Women’s Freedom League to its members who had been imprisoned. The brooch is in silver with the reverse engraved with the name of the prisoner and the date of arrest. The one in the picture was presented to Elsie Cummin upon her release from Holloway in July 1909.

Elsie Cummin had been born in 1877, one of the large family of Rev Joseph Cummin and his wife, Elizabeth. By 1901 the family had moved into Easebourne Vicarage, where Joseph Cummin was vicar. Mrs Cummin, who died in 1910, had been a suffrage supporter and gave the West Sussex branch of the Women’s Freedom League its velvet banner. Elsie Cummin was both honorary sec and honorary treasurer of the branch, which had been founded in 1908. She spoke at local WFL meetings and held WFL ‘At Homes’ at Easebourne Vicarage.

‘Four members of the Women’s Freedom League were charged on remand with obstruction. [Among] the defendants were ….Elsie Cummin, 32, Easebourne Vicarage, Midhurst….

Chief Inspector Rolfe said that on Friday afternoon he saw the defendants Hicks and Cummin standing by the doorway of the Prime Minister’s residence in Downing-street. They were carrying a roll of paper bearing the word ‘Petition’ and they said that they wished to present their petition personally to Mr Asquith. They were afterwards joined by the other two defendants. Meanwhile Miss Hicks had handed her petition personally to Mr Asquith when he alighted from a motor-car at his residence. At one time there were 300 people in Downing-street, and considerable obstruction was caused. After seeing Mr Asquith’s private secretary the witness told the defendants that Mr Asquith could tell them nothing further, but would send them an acknowledgment in due course. The defendants said that they wanted a date and time fixed for the reply; otherwise they would wait until they got it..

Police Constable 109A said that when Mr Asquith drove up one of the defendants said, ‘We have a petition, will you receive it?’. Mr Asquith asked her to hand it to his messenger, and Miss Hicks replied, ‘No, we want to hand it to you personally.’ Mr Asquith then said, ‘Very well, hand it to me,’ and he then received the petition from Miss Hicks.

[Defence counsel] submitted that the defendants did nothing but stand upon the pavement in a perfectly orderly manner.

The magistrate said that if the defendants would undertake that there should be no kind of disturbance of any description until the appeal in the somewhat similar case of Mrs Pankhurst had been decided he would adjourn the case sine die.

[Defence counsel] said that he could not give any undertaking on behalf of the defendants.

The defendants, on oath, denied that they caused any obstruction.

The magistrate imposed a fine of £3 in each case, with the alternative of three weeks’ imprisonment in the second division.’

Elsie Cummin and her three co-defendants refused to pay the fine and went to Holloway – and it was on her release that she was presented with the ‘Holloway’ brooch.

Elsie continued her association with the WFL for at least two more years. On the night of the 1911 census she was at home with her father and one sister. However, the census enumerator recorded two other of the sisters, who were not present, as ‘Suffragettes wandering about all night’. Elsie Cummin reported that seven members of the branch had boycotted the census. Clearly the Cummin family took the question of women’s suffrage seriously.

The Women’s Freedom League had first presented these brooches as early as December 1908 when Muriel Matters and Mrs Emily Duval received theirs from Mrs Despard at a ceremony in St James’s Hall, Piccadilly. The Women’s Social and Political Union copied the idea and in April 1909 instituted a Sylvia Pankhurst-designed ‘Holloway’ brooch to reward their members who had been to prison. As so often, however, it is the WSPU’s insignia which has had the wider publicity. 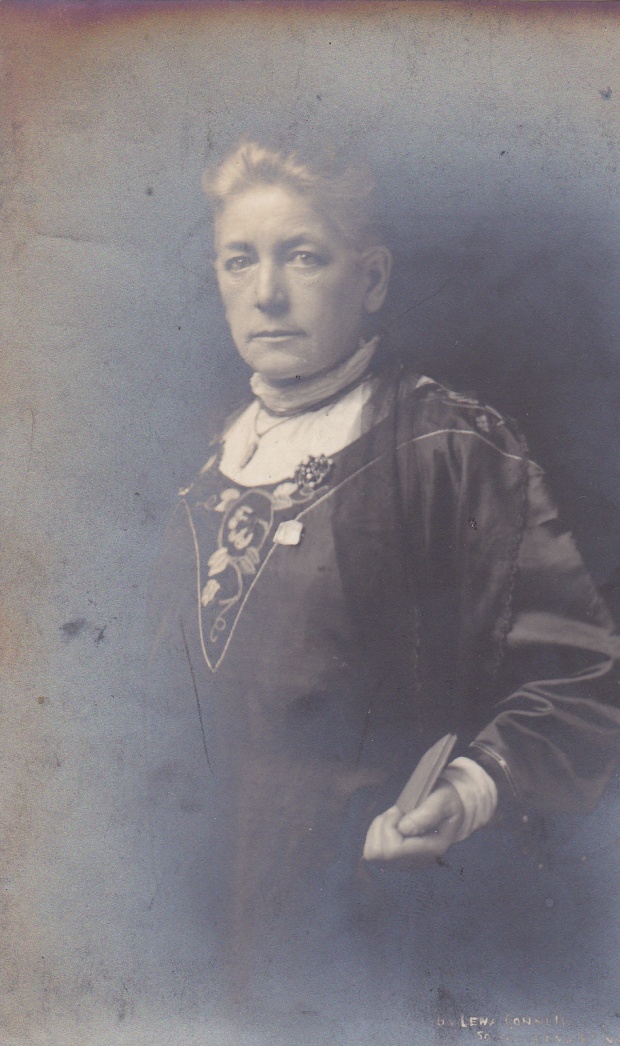 This entry was posted on September 21, 2015, 3:25 pm and is filed under Collecting Suffrage, Suffrage Stories. You can follow any responses to this entry through RSS 2.0. You can leave a response, or trackback from your own site.