On 7 August 2014 ITV will publish an e-book, Kate Parry Frye: The Long Life of an Edwardian Actress and Suffragette.  Based on her prodigious diary, this is my account of Kate Frye’s life and is a tie-in with the forthcoming ITV series ‘The Great War: The People’s Story’, in which Romola Garai plays Kate. For details of the TV series and its accompanying books see here.

To discover more about the entirety of Kate’s life – her upbringing, her involvement with the suffrage movement, her marriage, her London flats, her life in a Buckinghamshire hamlet, her love of the theatre, her times as an actress, her efforts as a writer, her life on the Home Front during two world wars, her involvement with politics – and her view of the world from the 1890s until October 1958  – download the e-book – £4.99 – from iTunes – : http://bit.ly/PSeBKPFITVal. or  £4.99 from Amazon. 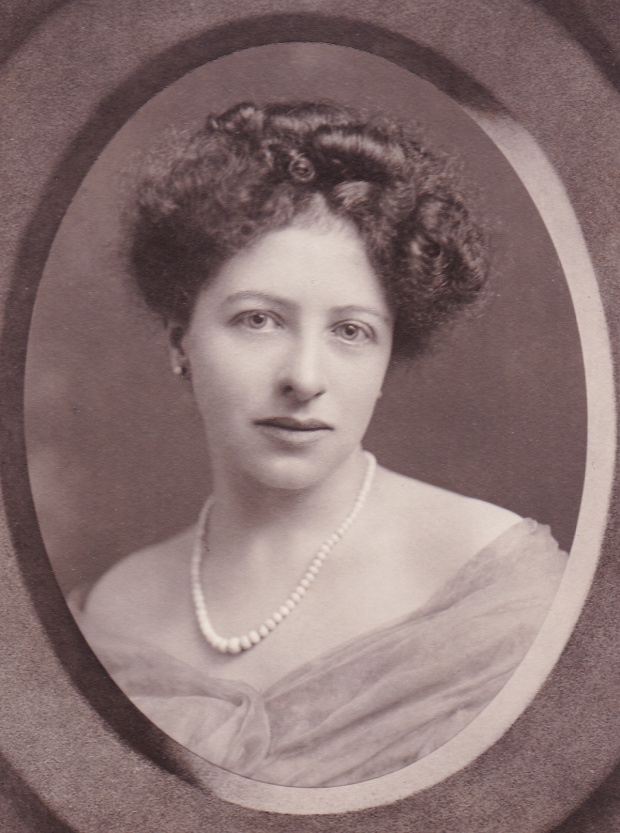 As a lead-up to publication I thought I’d share with you some entries from Kate’s diary from the month before the outbreak of war. Through her day-to-day experience we can see how the war stole up on one Everywoman. Kate was at this time 36 years old, living in a room at 49 Claverton Street in Pimlico and working in the Knightsbridge headquarters of the New Constitutional Society for Women’s Suffrage. It was now nine years since she had become engaged to (minor) actor John Collins. Her father died in March 1914 and her mother and sister, Agnes, now all but penniless, are living in rented rooms in Worthing. For the previous few weeks Kate’s fiancé, John Collins, had been renting  a room in another house in Claverton Street but he has now left for the West Country, to take up a position with a touring repertory company. Kate is feeling rather bereft – but has now begun her summer holiday, staying with her mother and sister in Worthing.

A beautiful day as regards weather. Well it is settled England is to go in with France to protect her and Belgium. What a slap in the face for Germany !!! And as Italy won’t fight with Germany and Austria that is another set back. Germany expects to be allowed to walk over anywhere just as she pleases. What a brutal country – and what a Kaiser!!!

A letter from John from Exeter saying he is expecting a letter every minute giving him instructions to join his Unit. He writes in very low spirits. I think South Africa was enough for him. Agnes said she felt very ill – so I got up and arranged the room and got her up to my room and Mother went out for the doctor. He wasn’t in so she left a note. Agnes seemed better and not so low spirited when I had her in a cheerful room, but oh dear I don’t want the work of it. I feel so tired myself and disagreeable and overwrought I want to shriek.

I went out 12 to 1 with ‘Dear Love’. Read papers all the afternoon, writing and needlework in the evening waiting for the doctor – then as he didn’t come I went round and asked him to come early tomorrow morning if not tonight. He was still out so did not turn up.

This entry from Kate’s diary speaks for itself. That the day’s events – both national and domestic -have left her tired, disagreeable and overwrought seems entirely natural. Who wouldn’t want to shriek?

But what of those who did not keep diaries? Perhaps I’ll take the opportunity on this commemorative day to tell briefly how the War affected one other small family.

My mother, Christmas 1914. On the reverse of this postcard is written ‘With Best Wishes for a Merry Xmas From Meg, Tom and the ‘Wee Un’.

On 4 August 1914 my mother, Margaret Wallace, born on 5 October 1913, was one day short of ten months old. She was living with her parents in Edinburgh where her father, Thomas Wallace, was a cashier in a brewery. On 2 December 1915, a couple of months after her second birthday, he joined up, aged 27.  He qualified as a signaller and telephonist (First class signalling certificate )with the Royal Garrison Artillery, was mobilized on 17 August 1916, setting sail from Plymouth for France. 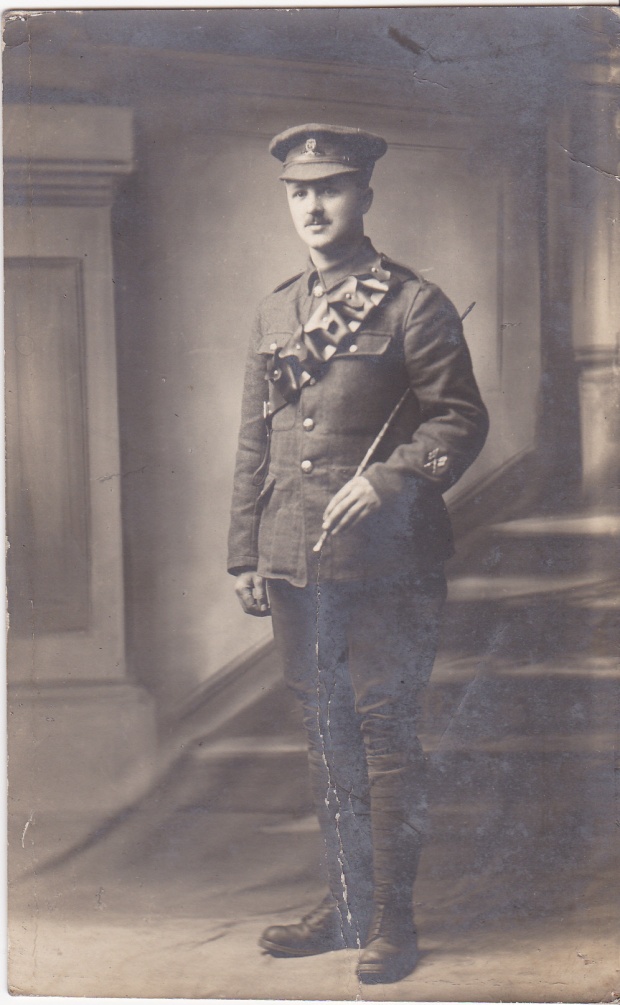 He served in France  until November 1917 when the 289th Siege Battery was redeployed  to northern Italy. I have read 289 Siege Battery’s War Diary (held in the National Archives -WO 95/4205 289) which covers the period from Dec 1917 to May 1918 and gives a very interesting picture of army life up in the mountains above Vicenza. The officers seem to have enjoyed reasonably regular short breaks, allowing them visits to Rome.

Thomas Wallace’s army record seems uneventful. On 22 March 1918 he was admonished by the C.O. for turning up 85 minutes late to 9pm Roll Call, so I hope he had been having some fun. I doubt he ever got to Rome. On 19 April he was awarded First Class Proficiency Pay of ‘6d per diem’ and on 17 May was sent on a ‘Pigeon Course’ at General Headquarters, rejoining his Battery a week later. Three weeks later,  on 15 June, during the first day of the battle of Asiago he was killed. Army records show that his effects – comprising photos, 21shillings, metal wrist watch (broken) and signaller’s certificate – were returned to his widow, my grandmother.

The story handed down in the family ran something along the lines that, as a signaller, Thomas Wallace had been alerted to the fact that the Austrians were about to make a surprise attack, that communications had been disrupted and that he was relaying this information by travelling down the Line in person when he was killed. One is naturally very wary of ‘family’ stories, knowing full well how they get corrupted in the telling  but in records held in the National Archives, I did read, in a report of the battle of 15 June,

Casualties in Brigade: 1 officer and 4 other ranks killed.’

The report of course doesn’t name the ‘other ranks’ but I wondered if Gunner Thomas Wallace was not one of those men.

He is buried at Magnaboschi Cemetery, a lovely tranquil spot, which when we visited some years ago we approached on foot through meadows. A fair proportion of the men buried in this small cemetery were also killed on 15 June 1918. The War Graves Commission information for Thomas Wallace is correct, whereas that created by the War Office is careless enough to have him killed in France. It just shows that one should never trust even the most official of records without corroborating evidence. Some years ago I did manage to get his entry corrected in the Roll of Honour of the Royal Garrison Artillery, contained in Scottish National War Memorial in Edinburgh Castle. Wasn’t it just typical, I thought, when you know something about anything ‘They’ would get it wrong.

That cemetery was a world away from the life my grandmother knew – the villages and small towns of Fife. I doubt she ever saw a photograph of his grave. She never seemed to recover from his death. Life on a war widow’s pension was a struggle. She kept all the letters he sent from the War – and when I was about 12 years old I was allowed to read one or two. I particularly remember one that described his crossing of the Lombardy Plain on the way to Italy. Alas, those letters disappeared around the time of her death in a nursing home in the early 1960s.

My widowed grandmother, with my mother and her brother, in the doorway of their Falkland cottage

Like so many other children of their generation my mother and her brother, who was born in December 1917, grew up without a father. That was all they had ever known.

My mother in her University of St Andrews graduation gown

What were that young couple saying to each other as they discussed the news of War in their Edinburgh tenement  on 4 August 1914?  Until now they had surely been more content with life than had Kate Frye. Did they sense the cataclysm awaiting them? Alas, however well one may understand the situation of those close by ties of blood, without a written record it is impossible to know them in the way that a diarist – such as Kate – has determined that we should know her. It is  Kate’s mood that I feel still reverberating this centennial Fourth of August.

Incidentally, although Thomas Wallace may not have seen much more of Italy than the Lombardy Plain and the Dolomites, one of his great-granddaughters is now exceptionally well-acquainted with Rome – find her at Understanding Rome. Isn’t it remarkable the pattern Life makes? 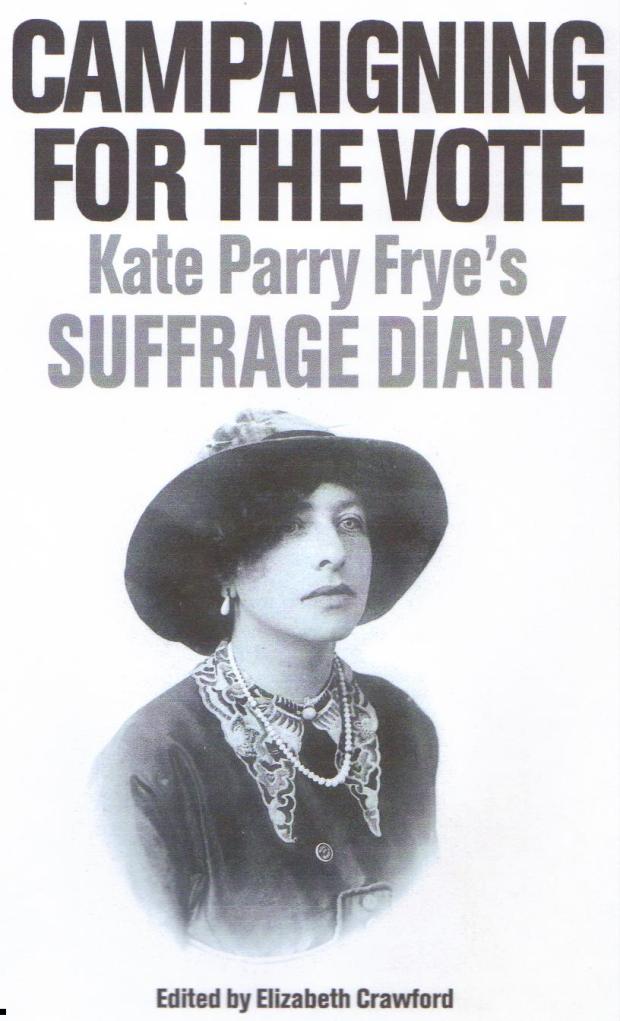 This entry was posted on August 4, 2014, 1:21 pm and is filed under First World War, Kate Frye's Diary. You can follow any responses to this entry through RSS 2.0. You can leave a response, or trackback from your own site.