Kate was at this time 36 years old, living in Claverton Street in Pimlico and working in the Knightsbridge headquarters of the New Constitutional Society for Women’s Suffrage. It was now nine years since she had become engaged to (minor) actor John Collins. Her father died in March 1914 and her mother and sister, Agnes, now all but penniless, are living in rented rooms in Worthing. John and Kate have joined them there this weekend.

We 3 had breakfast at 9 and John and I out at 10.30. We sat on the Beach all the morning. [In the evening] On the Pier and saw the performance by the Pierrot Troupe. It made Mother laugh so was a success.

Worthing Pier had reopened barely a month before Kate’s visit- on 29 May 1914 – after it had been badly damaged during a storm at Easter 1913. 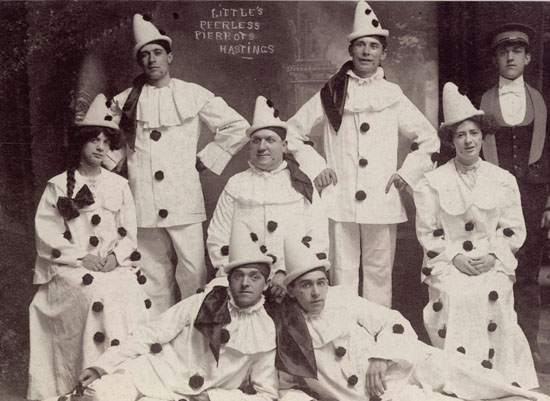 These pierrots were playing at Hastings – but, who knows, they may also have had an engagement on Worthing Pier. (Courtesy of pascoeandcompany.com)

This entry was posted on July 4, 2014, 8:48 am and is filed under Uncategorized. You can follow any responses to this entry through RSS 2.0. You can leave a response, or trackback from your own site.