Now that the Women’s Library Reading Room is open on the 4th floor of LSE Library, here is another idea  for those who might want to stretch their legs during their visit.

Why not take a gentle meander along Fleet Street and visit Queen Elizabeth I as she stands in her niche over what was the entrance to the Parochial School attached to the church of St Dunstans in the West? Not only is this thought to be the only surviving statue of the Queen carved in her lifetime, but she has a very close connection to Millicent Fawcett, in whose honour the Fawcett Library (as the Women’s Library was originally known) was named. 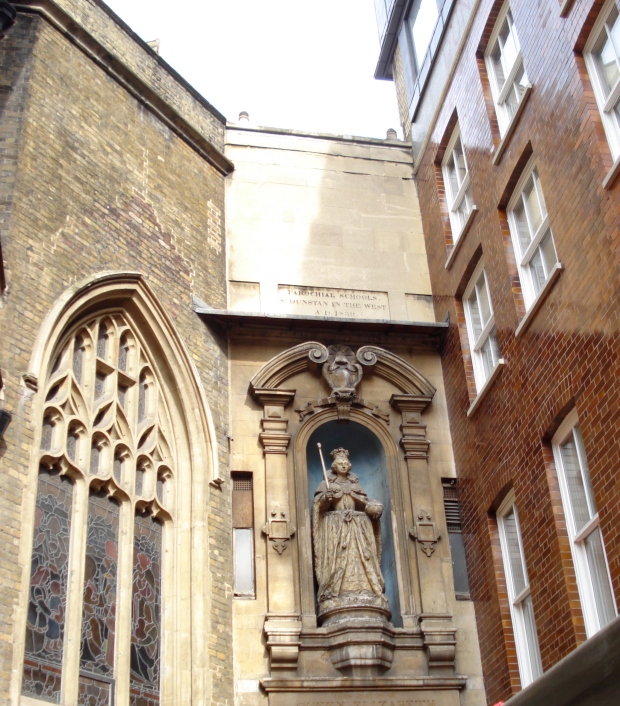 It is thought that the statue was carved in 1586. It then led a rather adventurous life before coming to rest in this niche on the facade of St Dunstans in the West when the church was rebuilt here in the 1830s. Nearly a century later it was in a dilapidated state and its restoration was financed by Dame Millicent Fawcett and her sister, Agnes Garrett, together with ‘Miss Jones of Lincoln’s Inn’ and Gwen John. The latter was not, as is sometimes stated, Gwen John the artist, but Gwen John, playwright and actress, author of a biography ‘Queen Elizabeth’ and a play ‘Gloriana’. Gwen John, whose real name was Gladys Jones, lived with Winifred Jones (‘Miss Jones’), presumably her sister, at 9 Old Square, Lincoln’s Inn. See here for National Portrait Gallery of this Gwen John.

In a rather neat sequence of events, on 28 June 1928 Dame Millicent Fawcett presided at the Annual General Meeting of the Society for the Protection of Ancient Buildings, at which the preservation of old churches was the topic of discussion, on 2 July the  Representation of the People (Equal Franchise) Act, for which she had been campaigning since 1866, became law, and on 31 July she unveiled the restored statue of Queen Elizabeth I. See the unveiling here, although Millicent Fawcett, modest as ever, cannot be seen. However the curtain she caused to be moved, moves. Which is sort of symbolic of the influence she exerted during her long life.

While the statue was undergoing restoration it was discovered that it had originally been coloured. So, the statue was repainted, following the original colours as closely as possible. The farthingale and corsage were white, the face was tinted a flesh colour and her crown was gilded.  Alas, this colouring is no longer obvious to the passer-by and the Queen has rather faded back into the facade of the building.

Millicent Fawcett died just a few days over a year after unveiling the statue and in her will left £700 towards its upkeep, although that fund may now have been exhausted and wound up.

If you wanted to pause, you could combine veneration of the Virgin Queen and thoughts of the venerable suffrage campaigner with a coffee from the stall that is now a permanent fixture just below her niche.

This entry was posted on April 3, 2014, 9:34 am and is filed under Suffrage Stories, Walks. You can follow any responses to this entry through RSS 2.0. You can leave a response, or trackback from your own site.