Rooms Of Their Own: Victorian and Edwardian Women’s Clubs: Tea and Shopping

‘Is it not possible for ladies to possess a Club which will not afford too striking a contrast with the splendours of St James?’ So wrote Frances Power Cobbe in the early 1870s. She continued,  ‘Are not the female members of the families of those who frequent those palaces never to have a place of resort, where the rooms and appointments shall be at least as airy and handsome as those of their own homes, and where it may be a healthful and pleasant change for them to pass now and then a few hours of leisure?’ She then commented that whenever the idea was mooted ‘the poverty of women, as regards ability to incur any unusual expense, become curiously revealed..’ – that is, women who appeared wealthy, ‘lapped in excessive luxury, provided for them by the affection of husbands and fathers’ actually had no money of their own to expend on such a project and the affectionate husbands and fathers would not, she assumes, be prepared to give their money towards providing a club for their wives and daughters.

We have seen in previous posts how, after 1870, clubs for women had, indeed, been opened. Although many of these, like the Somerville, University or Writers’, were particularly aimed at working middle-class women.  What Frances Power Cobbe was envisaging was the opening of clubs on a par of grandeur with the gentleman’s clubs, such as the Athenaeum or Carlton.  Within 20 years her plea had, to some extent, been answered.  Such clubs did open: their  existence may owe something to the passing of the Married Women’s Property Act, which gave women greater control over their own funds.

However opulent the late-19th-century ladies’ clubs they never competed for territory with the gentlemen. Ladies’ clubs tended to group to the north of Piccadilly, close to the shopping areas of Oxford, Bond and Regent streets, leaving the southern side to the men.

The first of these ‘ladies’ clubs’ was the Alexandra, which opened in Grosvenor Street in 1884, its membership restricted to those eligible to attend Court, a not so subtle indication that divorcées were unwelcome. Adopting for its name that of the Princess of Wales ensured its eminent respectability; there was no hint of the blue-stocking here. Men were not allowed to enter, even as visitors. a rule that Amy Levy regretted in her article, ‘Women and Club Life’, published in Woman’s World, 1888. The club was large and extremely comfortable, residential for short visits only, but with accommodation for accompanying ladies’ maids.

Dinner at the Empress Club

The Empress Club, founded in Dover Street in 1897, named for the Queen-Empress herself, was even grander than the Alexandra, boasting two drawing room -offering a choice between the Louis Quinze or the Venetian style -, a dining room, a lounge, a smoking gallery and a smoking room, a library, a writing room, a tape machine for news, a telephone, and a staircase decorated with stained glass windows depicting Shakespeare’s heroines.

On the night of the 1901 census Otho Oliver, the owner and club secretary, was living on the premises, together with a female manager and a large domestic staff, comprising around 40 female and 12 male servants (including an engineer). There were around 30 women guests staying at the club, as well as several family groups, including husbands.

Princess Bamba Duleep Singh and her daughters, Sophia and Catherine, were leading members of the Empress Club

At one time the Empress had 70 bedrooms available to its  2700 members. However,  on the night of the 1911 census  the number of live-in staff had shrunk to 25 and only 14 guests – all women – were registered as staying the night.

Otho Oliver (1868-?), the owner of the Empress, was the younger brother of Gilbert Oliver (1867-?) In 1891  Gilbert had been a ‘perfume manufacturer’,  but in 1894 founded the ‘Ladies’ Tea and Shopping Club’,’to provide for ladies of social position the comforts and convenience that men have found in their clubs for years past.’ I am not sure that the Oliver brothers would themselves have been eligible to join a gentleman’s club, but they clearly knew what the ladies wanted. In 1899 the Tea and Shopping Club had transformed itself into the rather more imposingly named ‘New County Club’,  with premises at both 21 Hanover Square – with 30 rooms – and 84 Grosvenor Street. 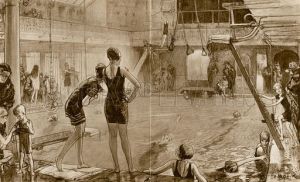 Next door to the Empress, at 34 Dover Street, women were able to make use of the facilities of the Bath Club, which had been founded in 1894. However, they were not allowed to use the Dover Street entrance but had to access the club through a ‘ladies’ entrance’ in Berkeley Street. The club’s main emphasis was on sport particularly, as it name suggests, swimming.

Dover Street was favoured for clubs. At no 31 Mrs Jennie Cornwallis-West (aka the mother of Winston Churchill) founded the Ladies’ Athenaeum for ladies interested in politics, arts, literature and music and a little earlier the Ladies’ Imperial – for women members of the Conservative and Unionist parties – had opened at nos 17 and 18.

A little to the north the Alexandra Club (no 12) was later joined on Grosvenor Street by the Ladies’ Empire Club at no 69.  The Ladies’ Automobile Club, which had been founded in 1903 when the Automobile Club (later the RAC) refused to admit women, eventually moved to Brook Street. It drew its members from the class that could not only afford to motor but  were sufficiently daring to do so.

And it is clubs for the more socially and politically daring that the next ‘Rooms of their Own’ post will discuss.

This entry was posted on December 3, 2012, 9:49 am and is filed under Rooms of their Own: Women's Clubs. You can follow any responses to this entry through RSS 2.0. You can leave a response, or trackback from your own site.