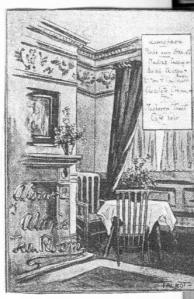 One of the London tearooms most popular with suffragettes and suffragists was Alan’s Tea rooms at 263 Oxford Street. In my Women’s Suffrage Movement: a reference guide,I suggested that the owner, ‘Mr Alan Liddle’, while not charging the rent of the room for such meetings, doubtless made his profit from the sale of the accompanying tea and buns, conjuring up the image in my mind of a suave male entrepreneur cashing in on the need of campaigners for a safe haven in which to meet in Central London. How mistaken I was.

What I did not then realize, and my researches have only recently revealed, was that the owner was not ‘Mr Alan Liddle’, but ‘Miss Marguerite Alan Liddle’ (1873-1946), the daughter of a Shropshire solicitor. It would seem that she chose to be known by her second, presumably a family, name, signing her will, for example, as ‘M. Alan Liddle’.  She does not seem to have taken a direct part in the suffrage movement, but certainly did lend her support, first advertising in the WSPU newspaper, Votes for Women, in, I think, the issue of 31 December 1908.. However, a little research has revealed that she was the sister of Helen Gordon Liddle (note, again, the use of a family name, in this case their mother’s maiden name) who was an active member of the Women’s Social and Political Union. Helen was the author of The Prisoner, one of the more sought-after suffragette memoirs, describing the month she spent in Strangeways prison, Manchester, in October and November 1909.

Although her sister, Alan, already knew of the WSPU and Votes for Women, Helen writes that she herself only became aware of the WSPU in February 1909 when she read about a deputation to Parliament led by Mrs Pethick-Lawrence. In June 1909 she was a member of one of the deputations sent to the Prime Minister and was arrested – but not prosecuted. She wrote ‘my time was not my own to give absolutely to the WSPU’ –she was a teacher of music and singing – but she did spend three weeks in Edinburgh in September helping to prepare for grand demonstration there. In October she protested at a Cabinet Minister’s meeting in Manchester and was ejected. The next night, 20 October, women were excluded from the meeting – so she broke a post office window in protest, for which she was sentenced to one month’s imprisonment with hard labour in the third division. Her companion in this was Emily Wilding Davison, whose will she had witnessed earlier that day. In her book she states that she wanted to describe the atmosphere of prison and its effect upon a prisoner who is forcibly fed. So, while Alan Liddle was advertising her luncheons etc in Votes for Women her sister was on hunger strike in Strangeways.

Alan Liddle had opened the Tea Room in November 1907 in a building on the south side of Oxford Street, very slightly to the west of  Oxford Circus, and, as was mentioned in advertisements, ‘three doors away from Jays’. This was a large fashion store on the south-western quadrant of Oxford Circus, the site now occupied by a Benetton store. So, as a business, it was certainly very centrally placed, its only drawback being that it was not on street level but on the first floor. Presumably customers entered through a door to one side of the shop front (which was the dry cleaners Achille Serre) and went up a staircase – which might be thought of as something of a deterrent as there was a wealth of competition from other cafes, tea rooms and restaurants around.

For instance, there was a Liptons refreshment room at no 265-7, another restaurant at 269, a Lyons tea room at nos 277-81 and an ABC at no 283. So I am imagining that Alan Liddle felt the necessity to carve out a niche market – to attract customers through the door and up the stairs – over and above any passing trade – who might find it easier to enter one of the larger, ground-floor cafes close by. And I imagine that the niche market she aimed at was ‘the suffragette’.

I don’t know what Marguerite Liddle did before setting up the teashop – when she was 34 – or who was in her friendship circles.  In 1911, unlike her sister, Helen, she did complete a census return. This shows her, a ‘proprietoress of tea rooms’, living at 8a Holland St, Kensington as a lodger in the apartment of Miss Emilie Chapman, a nurse. She ran the tearooms until about 1916.

Besides suffragettes, she also sought to attract women out clothes shopping in the West End – the obvious clientele. In 1910 the ‘Vanity Pages’ of The Idler, a popular magazine, edited by Jerome K. Jerome, Mrs Edward Talbot, while discussing clothes shopping in Conduit St and New Bond St , wrote ‘We then had the nicest little luncheon, with the comforting knowledge that everything was homemade, at Alan’s Tea Rooms (263 Oxford St) for the modest sum of 1/6.We send you a sketch and a menu, so you can see for yourself. The rooms are charmingly decorated; one is set apart for smoking, while another, which is large and sunny, can be hired for At Homes and meetings. You can lunch, also, for a shilling, and for afternoon tea Alan’s popularity is undoubted.’

I was curious to know what Alan’s Tea Room looked like and managed to find a photograph of that block of Oxford Street -now redeveloped -that revealed that the red brick building was probably built in the 1860s. The first-floor room looking over Oxford Street had a semi-circular arcaded window – rather Venetian in style. It was an amazing piece of luck that Mrs Talbot accompanied her piece in The Idler with a small line drawing of a corner of Alan’s Tea Rooms. So we can see that the room had a ceiling cornice above a frieze of garlands. The walls were probably papered with a small-patterned wallpaper. There was a plain, early-19thc-style fireplace and panelling under the window. The windows were draped with two sets of curtains. One was a set of short – to the sill – lightweight material ones – and then, over these, there were heavy drapes – probably velvet- looped back at the sides. There was a vase of flowers on the mantelpiece and a picture over it. The furniture was sort of arts and crafts. The tea table, covered with a table cloth, shown is of the ‘gipsy’type – typically Edwardian – with slightly splayed legs. The chairs were high stick-backs – perhaps with rush seats. The Luncheon menu (for one shilling) was:

Advertisements revealed that luncheons cost 1s or 1s 6d (served between 12 and 2.30) and Teas were set at 4d, 6d and 1s. Mention was made of the food being home-made – so perhaps we can assume that there was a kitchen on the premises – and that Alan employed a cook – as well, probably, as at least one waitress?

In another 1910 issue of The Idler there was another ‘editorial’ piece in The Vanity Pages:

‘Hostess [ie the questioner, who as asked for suggestion of a place in central London to hold an ‘At Home’]. I’m always pleased to be of any help if I can, in your case I know of the very place you want. At Alan’s Tea rooms, 263 Oxford St, there is a nice room available for at Homes. It is large, sunny and charmingly furnished, and can be hired at a moderate figure.’

This would have been the room hired by suffrage societies – for whom, as I have mentioned, it was advertised that no charge was made. And the societies did take advantage of the offer. The Tax Resistance League held its first members’ conference there on 14 November 1910, the Catholic Women’s Suffrage Society its inaugural meeting in March 1911, the Forward Cymric Union –a militant Welsh suffrage society– held monthly meetings (c 1912) at Alan’s, attracting 50 to its first meeting. Visits of individual women to the Tea Room are, of course, very much more elusive to pinpoint – though we do know that on 26 July 1913, at the end of the NUWSS Suffrage Pilgrimage, Margory Lees and her companions went there for dinner.

Alan Liddle ran her Tea Rooms for about nine years – probably until 1916 – provinding pleasant surroundings and home-cooked food to members of both wings of the suffrage campaign.

This entry was posted on September 4, 2012, 9:35 am and is filed under Suffrage Stories. You can follow any responses to this entry through RSS 2.0. You can leave a response, or trackback from your own site.