Posted by womanandhersphere in Uncategorized on October 10, 2016

Back in the summer I was delighted to receive a commission from a small reprint publisher, the Dean Street Press, to write an introduction to three novels by Rachel Ferguson that they were planning to reissue. I guessed why they had asked me… I had written the entry on her in the New Oxford Dictionary of National Biography. But I was especially pleased to have the opportunity to set out more about her life and to tease out links with the novels because she had spent her early years in Teddington, the suburb adjoining Twickenham, where I had spent my youth, and the road where she had lived was familiar to me. Two of the reissued novels, Evenfield and a

Harp in Lowndes Square, in whole or in part conjure up life in late-Victorian Teddington as seen through her idiosyncratic eyes and, knowing from her autobiographies, that Rachel Ferguson was somewhat haunted by memories of her childhood, as I read the novels I could add another wraith, my teenaged self, to those wandering the path from the station or walking over the bridge to the more sophisticated Kingston shops. Needless to say this solipsistic reading is mine only.

The third of the reissued Ferguson novels is 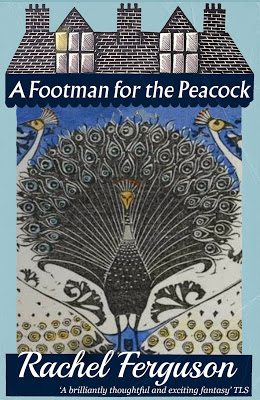 A Footman for a Peacock, a fantastical tale set in the early years of the Second World War.

After I had delivered the Ferguson Introduction Dean Street then asked me to write one for another novel in this tranche of reissues, Winifred Peck’s Bewildering Cares.

I had read the author’s autobiographies some years ago and, as it happens, had very recently read a biography of her niece, Penelope Fitzgerald, which includes good background information on Winifred’s family – the Knoxes. Growing up, alongside her decidedly idiosyncratic brothers, in a clerical household, provided Winifred with plenty of material for her novels and, again, I was able to make links between her life and her fiction. Bewildering Cares covers a week in the life of a vicar’s wife in the early stages of the Second World War.

These novels are only three of nine that Dean Street Press have released this month (October 2016) under the ‘Furrowed Middlebrow’ imprint. Isn’t that a great name? It comes from the eponymous blog conducted by Scott, a Californian enthusiast for novels by British women writers (particularly those from the 20th-c inter-war years).  Do have a read of the blog – click here. His enthusiasm convinced Dean Street Press to reissue his chosen titles –  and more Furrowed Middlebrow reissues are planned.

I love the covers of all the new ‘Furrowed Middlebrow’ titles – and am delighted to be associated, even in this most distant way, with Eric Ravilious. They are all available in paperback – for details (and a view of all the other covers) – click here. They can be ordered direct from the publisher, or from Amazon, or the Book Depository, or from any bookshop. They are all also available as ebooks.

For some unfathomable reason this series of reprints has been the target of a rather ridiculously vindictive Amazon reviewer who has spent a good deal of time in constantly rewriting the ill-conceived ‘thoughts’ that accompany her award of ‘one-star’ to all the ‘Furrowed Middlebrow’ books, which she clearly hasn’t even bothered to read. One blogger, ‘Stuck in a Book’, has called (click here to read his call to arms) for the sensible and interested to do what they can by asking readers of the books to give their own Amazon review (of course most readers would probably normally never think of doing any such thing) so that, if they like the books, they can improve the star rating. Such is Amazon nonsense.