Book of the Week: Margaret Sanger, Woman And The New Race – Kitty Marion’s copy – rich with suffrage and Sanger associations

Posted by womanandhersphere in Book of the Week on October 2, 2012 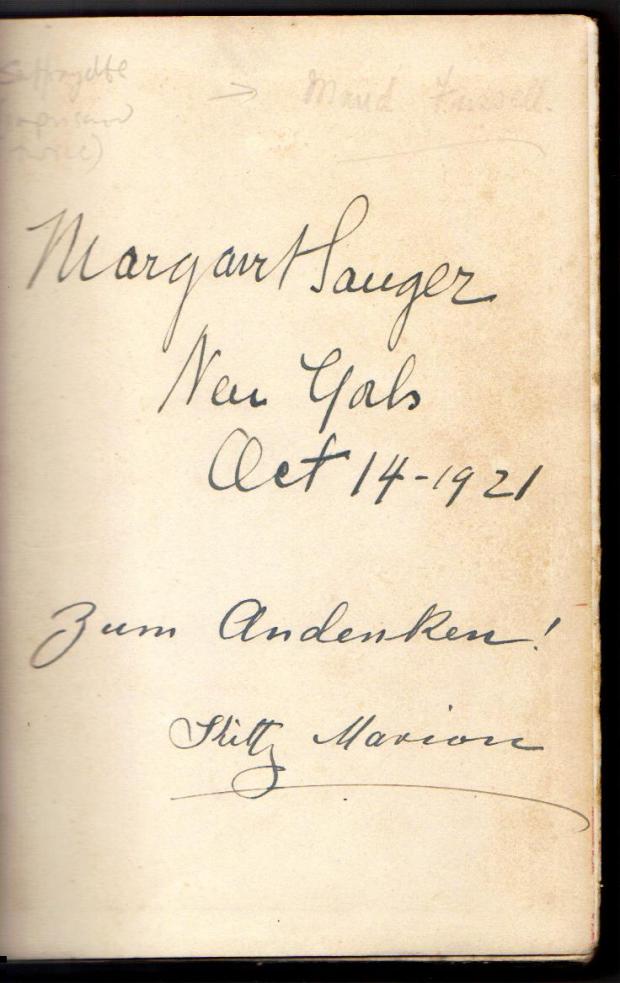 Margaret Sanger spearheaded the birth-control campaign in the US.  In this book, first published in 1920, she writes: ‘The most far-reaching social development of modern times is the revolt of woman against sex servitude. The most important force in the remaking of the world is a free motherhood’. The Introduction to the book is by Havelock Ellis, one of several leading thinkers with whom she had an affair.

In October 1914 Margaret Sanger fled from the US to England while on bail for violating US postal obscenity laws – the charge was that of sending through the post copies of her radical feminist journal, The Woman Rebel, which advocated the use of contraception.  She remained in England until October 1915. Coincidentally it was in October 1915 that Kitty Marion, a former, German-born,  militant suffragette, set sail for the US. Once in New York she worked for many years for Margaret Sanger, her role being that of street seller of Sanger’s Birth Control Review.

In England in 1913 Kitty Marion had been  sentenced to three years’ imprisonment for her part in the burning of the grandstand at the Hurst Park racecourse (as retaliation for the death of Emily Wilding Davison)- although, after going on hunger and thirst strike,  she was released under the Cat and Mouse Act. It would  appear that, on the run, she was  one of the WSPU’s most active arsonists, although she evaded detection for much of the destruction she committed.  In New York, on 14 October 1918, she was again given a prison sentence – this time for distributing Birth Control Review.

Underneath this is written ‘zum Andenken! Kitty Marion’ [translated from German: In Memory!].  This inscription obviously commemorates the 3rd anniversary of Kitty Marion’s imprisonment – of which Margaret Sanger had at the time written ‘We glory in her deed’. I think the second part of the endpaper inscription may be Kitty Marion’s hand. For although the ink looks much the same as the Sanger message, I think the writing is different.

Yet another layer of suffrage association is revealed by the ownership signature, written faintly in pencil in the top right corner of  the same page. It is that of Maud Fussell, another former member of the WSPU – and, again, one who suffered imprisonment.

My reconstruction of the history of the book is that it was signed by Margaret Sanger for  Kitty Marion and was subsequently given by Kitty Marion to Maud Fussell. It was sold to me along with other books that had been in Maud Fussell’s possession.

The book is in good condition and is  a particularly interesting association copy.    Price £165 plus postage.