Suffrage Stories: Kitty Marion, Arson, A Route Taken – And A Touch Of Solipsism

Posted by womanandhersphere in Suffrage Stories on November 6, 2014

At the planning stage the producer was kind enough to invite me to contribute to the programme – with the brief to discuss something of Kitty’s suffragette activities. The  most notorious of these – or, at least, the most publicly known – was the burning down of the stadium at the Hurst Park racecourse at Molesey. This she did with the aid of an accomplice, Clara (Betty) Giveen. You can read how and why they acted as they did in –  Suffrage Stories: Kitty Marion, Emily Wilding Davison And Hurst Park

Hurst Park racecourse ran alongside the Thames just across the river from Hampton Court and although much of it was sold for redevelopment in the 1960s, the remaining open space and the layout of roads and fields have changed  little in the past 100 years, making it worthy of a visit for a spot of location radio. It was decided, therefore, that we should retrace the arsonists’ footsteps.

I offered to drive our little party  from central London to Molesey, a journey that I know like the back of my proverbial hand. For the road that leads down to Hampton Court passes the house on Twickenham Green where I grew up and which remained in my family for over 50 years.Moreover, during my schooldays I had made the journey between Twickenham Green and Hampton every day – for the first few years on that now all but forgotten vehicle, the trolley bus. 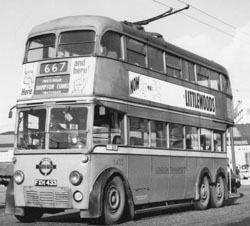 Now, in September 2014, our destination was Molesey Cricket Club, which lies, as it did in 1913, next to the erstwhile racecourse. In her unpublished autobiography Kitty mentions that, having left the road, she and Betty crossed a cricket field and so, leaving the cricket club car park, we made our way down a ditch (I with much less agility than my younger companions), through brambles and  into the open sunshine of Hurst Park. 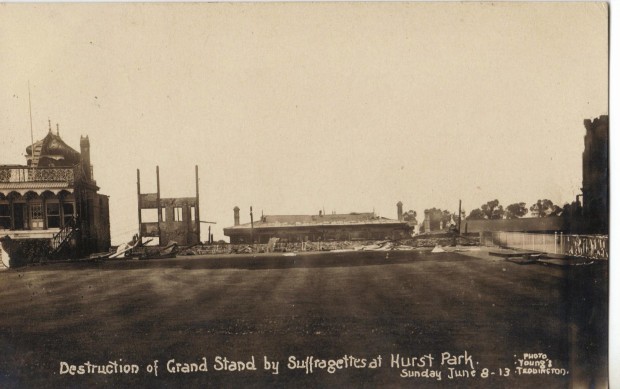 We looked over towards where the racecourse stadium had once stood and imagined the scene – as shown in this photograph –  revealed by the light of day on Monday 9 June 1913. The fire set by the two women had taken hold very quickly, rather taking them by surprise, and they, with the gas mains exploding, throwing up fountains of fire, they had fled the scene.

I was particularly interested in the next stage of Kitty and Betty’s night excursion. For a long time I had suspected that their journey on foot might have taken them past 15 The Green, Twickenham, but I had never before had occasion to research the matter. That their destination had been a house close to Kew Gardens Station was well known – but what roads had they taken to get there?

In fact the newspaper reports of their trial provide the answer. For they had been spotted at various points on their journey – the sight of two young(ish) women walking unaccompanied through the night had not gone unremarked. The first sighting – by a tramdriver – was at 12.45 am on the road between Hampton Court and Hampton and the second, most importantly, was at Fulwell, which lies between Hampton and Twickenham. 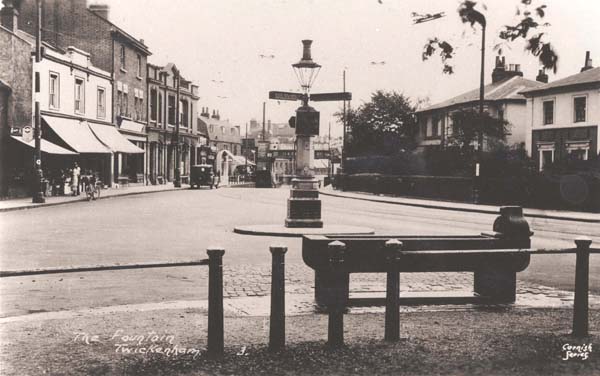 Twickenham Green c 1920s. The scene is still remarkably unchanged. No 15 is just out of the picture on the right. The house is identical to the one shown on the right here. (Photo courtesy of Twickenham Museum)

So, there it was – a proof that satisfied me. For from Fulwell the direct route took them right past Twickenham Green – probably along the very pavement you see on the right of the above photograph.

Kitty and Betty continued through Twickenham Junction and East Twickenham, crossed over the river and  were next seen in Richmond at 2.50 am. Alerted to the fire, the police at Hampton Court had sent constables on bicycles to scour the roads. This clearly produced no immediate result but  telegraphic messages had also been sent out to all police stations which may be why, in the early hours of the morning, police in Richmond and Kew were on the look out for likely suffragette suspects.

Making no attempt to keep out of sight, Kitty and Betty were walking along Kew Road when, at the corner of Pagoda Avenue, they attracted the attention of a policeman . He followed them down to Lower Mortlake Road where, as they seemed to be lost, he questioned them. They then wandered through the streets, with the police constable following, until in the end he it was who pointed the way to their destination – West Park Road.

Police in this area may well have been on particular alert because suffragettes had recently damaged plants in the Kew Gardens orchid house  and had set the tea room alight.  A middle-aged, middle-class suffragette, Ella Stevenson, who lived in Cumberland Road, a few streets away from West Park Road, had in March been found guilty of putting phosphorous into the post box at post office in Richmond’s main street, George Street . Edwy Clayton, a scientific chemist whose home, ‘Glengariff’, in Kew Road Kitty and Betty had walked past – was at this very moment on trial at the Old Bailey on a charge of conspiracy connected with the Kew Gardens tea room and other WSPU arson attacks.

Thanks to the producer’s iPhone map, we were better equipped than Kitty and Betty and, weaving our way through the Kew streets, arrived with little difficulty at what had been their ‘safe house’. This in 1913 was the home of Dr Casey and his wife, Isabella, and daughter, Eileen. The two women were dedicated suffragettes and Mrs Casey’s action in allowing a key to her house to be in the possession of Kitty Marion, a woman she did not know, seems to have shocked the court at the subsequent trial even more than the arson itself.

Thanks  to the spontaneous kindness of the present owner we were able to record briefly inside the atmospheric Edwardian villa – noting original interior fittings – such as the fireplace with the overmantle mirror in which Kitty must surely have glanced as she and Betty waited for what they must have expected – the knock of a policeman on the door.

The knock of course did come, Kitty and Betty were tried, found guilty of arson and sentenced. Kitty went on hunger strike and was released under the Cat and Mouse Act on a couple of occasions. On the second she was taken to Nurse Pine’s Nursing Home at 9 Pembridge Gardens in Kensington (she mentions ‘Piney’ in her autobiography) from where, after a decoy was employed, she escaped. 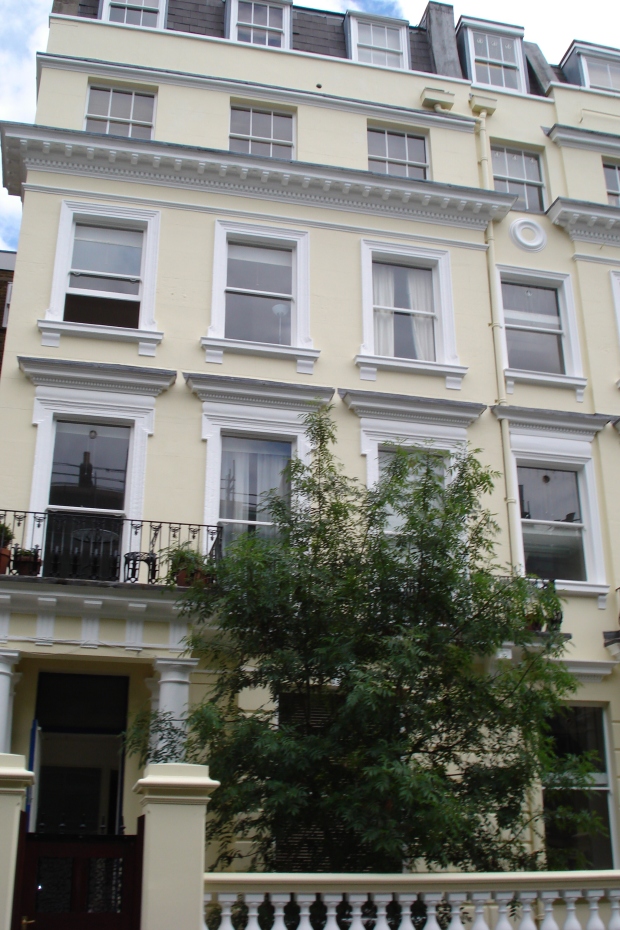 From then until her re-arrest in January 1914 Kitty Marion was on the run, working, as she put it, to ‘communicate with the government’. It was a dangerous time.