Kate Frye’s Diary: Canvassing for the Progressives in North Kensington,1907

Posted by womanandhersphere in Kate Frye's suffrage diary on September 13, 2012

Another extract from Kate Frye’s manuscript diary. An edited edition of later entries (from 1911), recording her work as a suffrage organiser, is  published as Campaigning for the Vote: Kate Parry Frye’s suffrage diary. 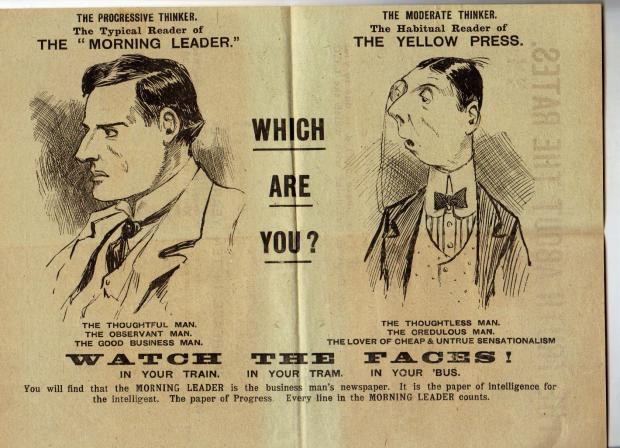 The LCC elections were due to be held on 2 March 1907; Kate and her family supported the Progressive Party. In fact, before becoming an MP, her father had been an LCC councillor on the Progressive ticket.

Dramatis Personae for these entries:

Sir Weetman Pearson, Lady Denman’s father, in 1910 became Lord Cowdray and it was as ‘Lady Cowdray’ that his wife was to be involved with a number of suffrage organisations.  Lady Pearson was, according to Lady Denman’s biographer, ‘determined to become a leading political and social hostess’ and the Pearsons’ house at 16 Carlton House Terrace, its opulent interior decorated in the mid-19th century by Owen Jones in the islamic style, provided a perfect setting. As we shall read, Kate, who was something of an expert on these matters, rated the Pearsons’ tea very highly.

H.Y. Stanger: Liberal MP for North Kensington, the seat once held by Kate’s father, in February 1908 introduced a women’s suffrage bill, which passed its second reading before being blocked. This was the greatest progress a bill had made since 1897.

Mr Jephson: Henry Jephson, retired civil servant, who was standing again as a Progressive member for North Kensington on the LCC.

Violette Mary Doake (b c. 1888): lived with her parents at 24 Stanley Gardens, Kensington. In 1892 her father had been elected as a Progressive member of the LCC for Kensington North; unsurprisingly the Doake family was staunchly suffragist.

At 2.30 Mother and I went by train from Notting Hill Gate to Charing Cross and walked through the Horse Guards and up the Duke of Yorks steps to Carlton House Terrace – Sir Wheetman [sic] Pearson’s house – by invitation of Lord and Lady Denman to a drawing Room meeting to hear Mr McKinnon Wood – Mr Wilks and the work we could do for the Progressives at the L.C.C. elections.

Nearly all ladies there. Lord Denman was a sort of Chairman & both he and Lady Denman spoke – she seems very nice. My dear friend Mr McKinnon Wood spoke again most beautifully – I do admire him. Of course I knew it all but I dare say some the facts came new to a good many there. Mr Stanger, Mr Jephson and Mr Percy Harris were there.

There was a most gorgeous tea downstairs afterwards it really was quite perfect – such cakes – in such quantities – I made a pig of myself and eat [ate] three and I had my tea and milk poured out of solid gold articles. I really did enjoy the party and the house is wonderful – what a position – looking out on the Park.

I dressed myself. John [her fiance] came at 7.30 to dinner and afterwards Daddie took he, Agnes and I up to the Horbury Rooms [Ladbroke Road] to the Opposition L.C.C. Candidates’ meeting – Mr Davis and Major Skinner. Well I thought it would be interesting but I never expected to be so thoroughly amused.

The Chairman was so funny and Harcourt-Smith such a noodle – a Dickens character with an eye glass. And as for Major Skinner I have never seen or heard the like really. He didn’t seem sharp and made quite an object of himself. He tried to propitiate the ladies – I never heard anything so awful. I blushed for him. He kept right away from the question of the L.C.C. altogether.  The only decent man there, for though Mr Whittiker Hampson speaks well, I wouldn’t trust him, was Mr Hume-Williams who opposed Mr Stanger at the Parliamentary Elections. He is a gentleman and speaks well, but he was not convincing – none of them were – they all talked nonsense – have no programme of work at all to bring forward. Their great cry is ‘give us a chance’ and they tell awful stories about the rates, which have really nothing to do with the County Council. It will be a real grief to me if those two dreadful people get in.

John, a thoroughly conservative spirit, doggedly tory, to the backbone was quite turned over by them though he thinks he upholds their views. I do so hate him to be a ‘Moderate’ thinker. We came back and talked them over and laughed merrily at their expense till John had to go at 11 o’clock.

When I got home at 5 o’clock I found a note and bundle from Gladys Wright asking me to deliver some Women’s Suffragist things. So after tea Agnes went out with me and we did Arundel Gardens and Elgin Crescent – a tremendous number of Women Voters in both. They were papers urging the Women to use their Vote. I feel rather shaky as they are sure to Vote Conservative but that is a cowardly way of looking at the matter, I know.

Went off to the [North Kensington Liberal] Club – Mother, Agnes and Florence [the Fryes’ maid] were there – and the room was full. Miss Jephson, Miss Doake, Mr McArthur, Mr Lewis, Mr Hatt and the usual workers and lots of people I did not know all working at top speed. 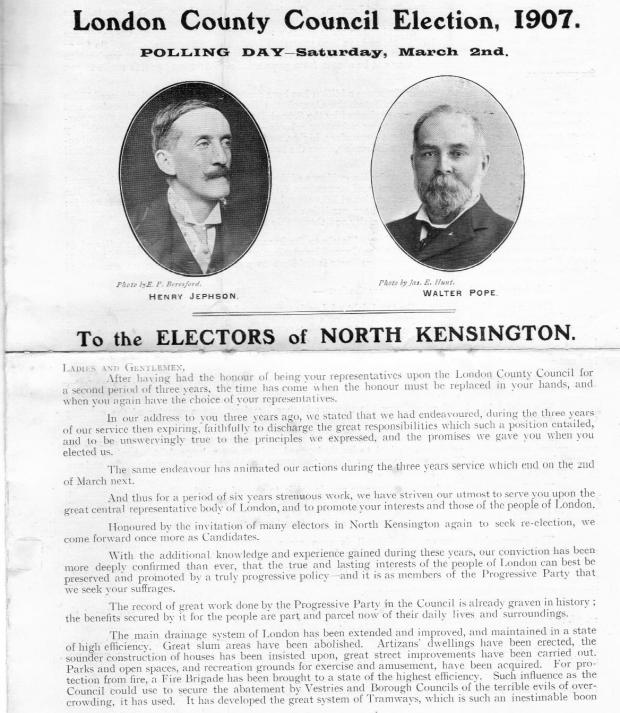 The great London County Council Election day at last and, very fortunately, a beautiful day for it. I should have been canvassing all this week, much as I hate the work – but I am so interested in the Election – but I have felt so awfully seedy I simply hadn’t the strength for it…Agnes and I went to the Pembridge Ward Committee Room and got some work to do. I had Westbourne Grove to do and it took me till 4.30. Mother and Agnes went together. I got so tired I felt nearly dead when I had taken the cards back and came home to tea. But I couldn’t rest and after tea Mother and I walked up to the Golborne Ward Committee Room.

It is depressing work in this Ward. There is no enthusiasm – but up there there was very little excitement amongst the workers – and my heart sank though most of them were cheerful. We saw Mr Jephson in the Committee Room. Miss Jephson, Mrs and Miss Doake, Mrs Willis and lots of workers. Mr Jephson was flying about madly in his Motor Car. Mother and I did three streets – Blagrove Road and two other long ones and kept on till within a few minutes of eight o’clock.

I got so excited and interested that I don’t know how I managed to keep going as I did. I did feel ill but I did some good work. Got one woman to vote who had never used her vote before. I had almost to hold her by force and interest her by telling her how I worked to get a vote. She decided she would go if she was driven. So I sent Mother off to find a carriage and I waited and hung on to her. It was so long coming I flew into the middle of the road and managed to stop Mr Jephson’s car almost by main force it seemed to me – but just then Mrs Widgery drove up in a carriage and she took the woman and a man who went to look after her.

Florence brought me the news and later the paper. Jephson and Pope beaten and the whole of London swept clear by the Moderates. ‘God help London’ I say since London does not seem inclined to help itself.