As both historical researcher and book dealer I stumble across facts that, while delighting, do not fit into planned projects. ‘Woman and her Sphere’ provides a home for such orphans, rescued from the rubble of history.

Among these ‘orphans’ have been a few suffrage artists, details of whose lives I have already posted as articles on this website. As a result I was commissioned to produce a biographical dictionary of many more. Art and Suffrage: a biographical dictionary of suffrage artists – now published by Francis Boutle. It covers the lives of over 100 artists, men and women (although mainly women), who worked to promote the suffrage cause. In soft covers, with over 100 illustrations in colour and black and white. £20

If you would like to order a copy of Art and Suffrage email me (elizabeth.crawford2017@outlook.com). 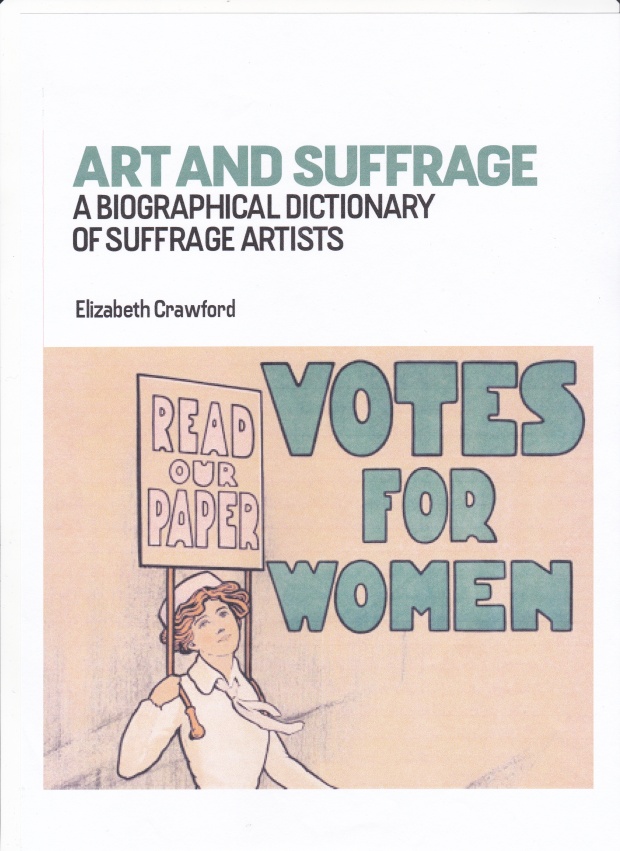 Another of my ‘orphans’ was Kate Frye (1878-1959), who was resurrected by ITV and put (played by Romola Garai) in a series – The Great War: The People’s Story. ITV then commissioned me to write her life. This story of an ordinary Englishwoman will appeal to all those interested in a real life lived – from the palmy days of Victoria to  the New Elizabethan age. For more details read here.

Download the e-book  from iTunes – : http://bit.ly/PSeBKPFITVal or from Amazon.

The Great War: The People’s Story was broadcast for 4 weeks in August 2014. You can watch Episode 2, in which Kate Frye appears, here.

Kate Frye’s diaries had already been the source of another book – covering her years as a suffrage organiser – Campaigning for the Vote: Kate Parry Frye’s Suffrage Diary. For details see here.

Do consult the Links (on right) to see – and hear – the fruit of some of the research I have undertaken over the last few years – and to view the books and ephemera that I have for sale on Abebooks.

I specialise in selling second-hand books and ephemera by and about women and produce catalogues of items for sale. Do get in touch if you would like to be added to my mailing list. Lists are sent by email. For my latest catalogue – see Catalogue 203

After graduating in history and politics, I worked for some years for Cambridge University Press and then J.M. Dent before combining work as a free-lance copy editor with caring for my three children.

I began selling second-hand books and ephemera by and about women in 1984. This area was then regarded by the trade as of little consequence. However, over time,  interest in women’s – and family – history has grown and been reflected in an awareness of the importance of primary source material – books and ephemera – in composing a picture of women’s lives in the past.

Intrigued by the material that was passing through my hands, I have, over the last 20 years or so researched and written several books. The first, The Women’s Suffrage Movement: a reference guide  (Routledge 1999) grew out of the necessity of researching items connected with the suffrage movement in order to be able to catalogue them for sale accurately. ‘What’, I thought, ‘is needed is a compendium containing full information on the people and societies involved.’  A publisher’s editor to whom I mentioned the idea agreed – and I set to work. The Reference Guide  was followed by The Women’s Suffrage Movement in Britain and Ireland: a regional survey, published by Routledge in 2005, which explains how – from 1866 -the suffrage movement developed throughout the British Isles.

In between these two books I wrote Enterprising Women: the Garretts and their circle, published by Francis Boutle in 2002. In this I discuss the lifetime’s work of a group of efficient, highly-motivated women who transformed women’s lives in Britain in the last quarter of the 19th century. The work of the Garretts and their circle opened for women entry to areas of work and study from which they had hitherto been barred – medicine, education,  and interior and landscape design – as well as, at the same time, campaigning for the vote. In 2009-11 I had the pleasure of helping to create the Elizabeth Garrett Anderson Gallery, generously funded by UNISON,  in what was the ground floor of the former Elizabeth Garrett Anderson Hospital, now part of the UNISON Centre at 130 Euston Road, London NW1 2AY.

Campaigning for the Vote: Kate Parry Frye’s Suffrage Diary was published by Francis Boutle in 2013. For this I combined the two aspects of my work, turning a voluminous diary that I bought as a bookseller into another source of primary research material for those interested in the suffrage movement. The book is now out of print

Kate Parry Frye: the long life of an Edwardian actress and suffragette was commissioned by ITV and published as an e-book in 2014.

Over the years I have contributed to various radio – and television – programmes and given many talks – at academic conferences, to schools and to local history groups – on a range of topics associated with my researches. I was awarded an OBE in the Queen’s Birthday Honours in June 2018 for ‘services to education’ – with particular reference to the history of the women’s suffrage movement.