I very much enjoyed attending this conference –Shoulder To Shoulder: Female Suffrage, Second-Wave Feminism and feminist TV Drama in the 1970s – which focussed on ‘Shoulder to Shoulder’,  the BBC’s 6-part series about the militant suffrage movement, broadcast in 1974.

The conference was held on 15 and 16 May 2014 at Birkbeck College’s School of Arts in Gordon Square. Who would think that behind the familiar early-19th-century facade of no 43 lies a state-of-the art cinema and gallery? It was a pleasure to be there.

And even more of a pleasure to be in the audience for a screening of one of the episodes from the series. The one selected was Episode 2 – ‘Annie Kenney’, written by Alan Plater, directed by Waris Hussein and starring Georgia Brown as Annie Kenney. This was the first time I had ever seen the production. I have long known of the series, have sold copies of Midge McKenzie’s ‘spin-off’ book, and have even sold copies of the Radio Times Special that was produced to accompany the series, and the tie-in issue of Radio Times in which Margaret Drabble interviewed three surviving suffragettes, Grace Roe, Leonora Cohen and Cicely Hale. But I have never seen the programmes – we didn’t have a television in the 1970s.

I was very impressed by the episode I saw – impressed by the script and by the production. From a 2014 perspective faces, dresses, sets etc  all look persuasively Edwardian – no hint, I think, of the 1970s.

The script, too, is pleasingly accurate. There was much discussion at the conference about the fact that the writers of the series were reflecting the Pankhursts’  view of suffragette history, centring the story around the characters of Emmeline, Christabel and Sylvia Pankhurst and Annie Kenney. Nevertheless they do not shirk from dealing with the politics of the campaign in considerable detail. Would any drama series nowadays bother (dare!) to discuss the nitty-gritty of the  ballot for private members’ bills – and actually mention the name ‘Bamford Slack’?

After the screening of the Annie Kenney episode we were privileged to be party to a reunion discussion between cast and crew of the series, chaired by Dame Joan Bakewell.  Sian Phillips, who played Emmeline Pankhurst, Patricia Quinn,(Christabel) and Angela Down (Sylvia) were joined by two of the series’ directors, Waris Hussein and Moira Armstrong, and Graham Benson, the programme’s production manager. All had given up their time to come along and reminisce about the making of the series. It’s always so interesting to listen to insiders talking – and remarkable that 40 years on so many details were recalled.

I particularly liked the fact that, because the budget allowed for so few extras, rather than attempting to show the battle in Parliament Square on ‘Black Friday’, the damage wrought on the suffragettes was, instead, hinted at by filming the detritus left on the ground, while  a voice-over intoned a dispassionate account (from a newspaper, think). Very much an example of  ‘less is more’.

One thing that became very clear was that cast, crew and audience were united in hoping that  Shoulder To Shoulder would be made available on a DVD. In my bookselling capacity I am often asked if I know where such a thing might be obtained – and the answer is that, not only has the series rarely been rebroadcast, but there is no DVD. You can find  the series on You Tube – but it really should be  commercially available, with added background, context, interviews etc.  Apart from the interest and enjoyment it would give to the general viewer, what an excellent teaching tool it would be!

Dr Janet McCabe of Birkbeck and Dr Vicky Ball of De Montfort University are planning to launch a campaign to persuade the BBC to produce a DVD of Shoulder To Shoulder. There will be a petition and, to coordinate the campaign, a Facebook page. But in the meantime, if you are interested in giving your support you can email Janet McCabe at jmccabe@bbk.ac.uk or Vicky Ball at vicky.ball@dmu.ac.uk. 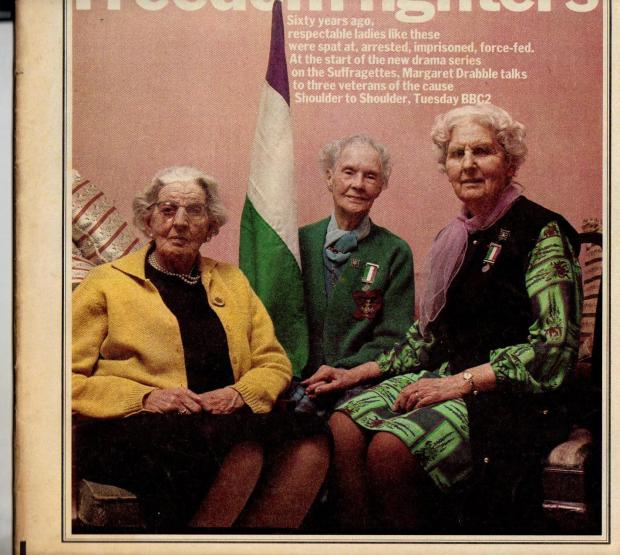 This entry was posted on May 20, 2014, 8:21 am and is filed under Suffrage Stories. You can follow any responses to this entry through RSS 2.0. You can leave a response, or trackback from your own site.