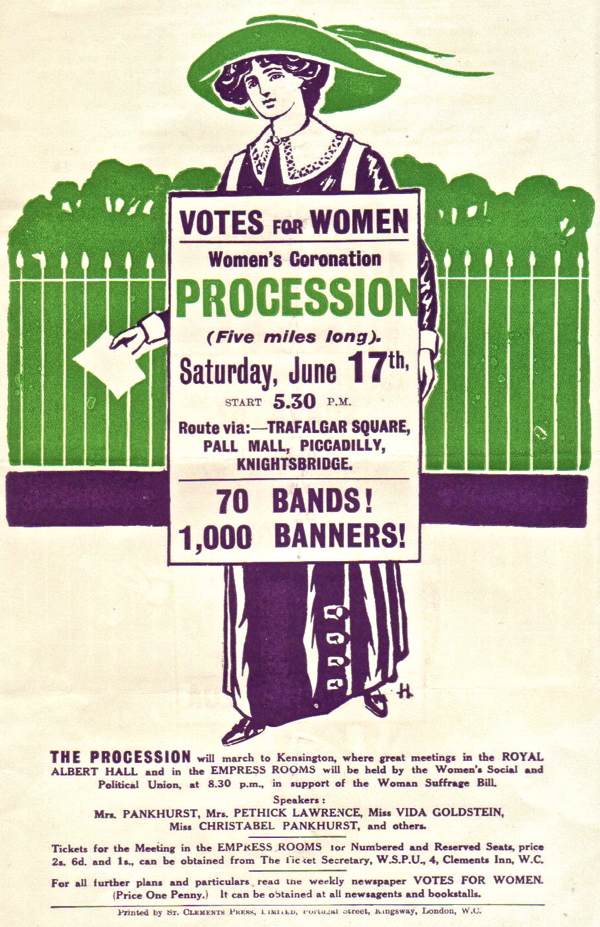 I have long admired this image, created to advertise the 1911 ‘Women’s Coronation Procession’. This particular item was carefully laid by Kate Frye between the pages of her diary. She was proud to be marching that day in the Actresses’ Franchise League contingent.

However I have only just discovered the name of the artist of this appealing flyer was and have immediately set about trying to find out what I can about her.

The name was delivered to me by Ken Florey who, in his superb Women’s Suffrage Memorabilia: an illustrated Historical Study, mentions the image, naming the artist as ‘Marjorie Hamilton’. The US suffrage society, the Women’s Political Union, had clearly recognised an appealing design when they saw it and used it to advertise a meeting held by Mrs Pankhurst in New York’s Carnegie Hall (see Votes for Women, 5 January 1912). Marjorie Hamilton’s name doesn’t appears in Lisa Tickner’s Spectacle of Women – and I must admit that I had not come across it in my own researches into women suffrage artists.

However, now that I have looked into the matter, I see that on 9 June 1911, in the issue that immediately preceded the Procession, the cartoon that appears the front page of  Votes for Women was drawn by Marjorie Hamilton. Moreover, I actually hold a copy of the front page of this issue in my bookseller’s stock – I just hadn’t looked sufficiently closely at the image to notice the signature. 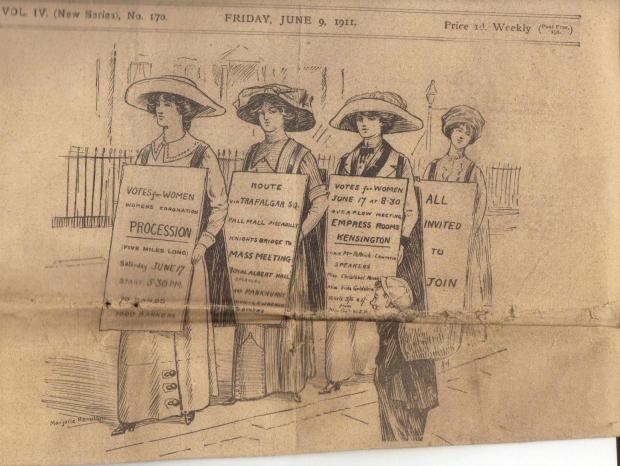 To have been given this position on the front page of Votes for Women was, indeed, something of an accolade – the paper’s usual artist, ‘A Patriot’ [Alfred Pease], had made way for her. Marjorie Hamilton’s ‘cartoon’ is, in fact, an advertisement for the Procession, with the lead character in her drawing dressed in the same way as the suffragette on the flyer. The latter, however, makes a very much bolder impression – the image greatly strengthened by the use of colour.  While the Votes for Women front-page picture is signed with her full name –  that is, ‘Marjorie Hamilton’ – the flyer carries only initials –  but these do appear to read ‘MH’. When describing the artist responsible for the image on the cover of the lavish Programme produced for the occasion of the Procession, Votes for Women  is rather coy – referring to her only as ‘an artist member of the WSPU’.  So who was Marjorie Hamilton?

My research indicates that she was born in Derbyshire in 1882. Her father, Arthur Hamilton, was a banker – a partner in S.Smith & Co’s Bank, Derby. Her mother, Georgina (nee Stokes) had been born in South Africa.  Marjorie had a slightly younger sister, Vera, and in 1891 the family lived, presumably in considerable comfort, with three servants and a live-in (young) governess, at The Mount, Duffield Road, Derby. Ten years later, in 1901, the family was living above the bank premises at 7 Market Head, Market Place, Derby, along with six domestic servants and a bank clerk. However, less than a year later Arthur Hamilton, now described as of ‘The Grange’, Ewell, Surrey, died, leaving £10,800. It was in 1902 that Smith’s Bank lost its individual identity when it merged with the Union Bank of London.

Georgina Hamilton, with her daughters, may have moved to Canada c 1906. Certainly Marjorie noted on a subsequent Canadian immigration form that she had lived in Canada from 1906-1908. Her sister, Vera, married in Vancouver in 1908 and in 1911, when the Canadian census was taken, was living there with her mother, her husband and two young children. Even though she was a member of the WSPU, Marjorie Hamilton, luckily for us, did not boycott the 1911 UK census and can be found, describing herself as an ‘art student’, as a boarder at 4 Mills Buildings, Knightsbridge, an 18th-century court on the north side of Knightsbridge High Road, close to the Barracks. At this time Mills Buildings was a rather raffish address, although her fellow boarders all appear very respectable.

The census was taken on 2 April 1911 and it must have been very soon after, while Marjorie Hamilton was living here, that she was given the rather important ‘Coronation Procession’ commission. Marion Wallace-Dunlop and Edith Downing were in charge of the artistic design of the Procession, which was being executed at 12 Smith Street, Chelsea. Perhaps  it was they who spotted her talent for graphic design. Incidentally on the night of the 1911 census those resident at this address were Miss Dean, a 27-year-old artist’s model, together with a young secretary and a shop assistant whose surroundings, with 8 rooms, between the three of them, were rather more spacious than those of their neighbours. I wonder if they let out one or two of those 8 rooms to the WSPU? It is clear from the reports in Votes for Women that there was a great deal of activity going on at 12 Smith Street in May and June 1911.

Alas, however, that is about all I can discover of Marjorie Hamilton’s career as an artist – except that in 1913 she was advertising that she would be happy to take order for water-colour sketches of country homes.

I next catch sight of her in February 1917 at Liverpool, embarking on the SS Carmania for New York. Her address is given as ‘Cranleigh, Surrey’ and her occupation is ‘artist’. So, in the six years that had elapsed she had presumably had – or at least had attempted to pursue – art as a career.

I did wonder why, in the midst of a war that made Atlantic travel so dangerous, she was making this journey. And then I realised that her final destination was not New York but Victoria, British Columbia and that she must have been going out to be with her mother – who died a month or so after her arrival.

Another seven years go by until in 1924 I found her again, once more about to enter Canada. However this time it is not as an artist but as the prospective matron of the Waifs and Strays Society Receiving Home at 661 Huron Street, Toronto.  This was Elizabeth Rye House – a home to where girls were sent from England to be trained for domestic service. On the immigration form Marjorie Hamilton gave her present occupation as ‘matron’, which may, or may not, indicate that she had found that art did not pay and that she had to find an other means of earning her living.

And there the trail for the moment ends. I know that the Toronto home closed in 1931 – but don’t know if Marjorie Hamilton was still there then. Did she return to England – or remain in Canada. I know that her sister died in Sussex in 1943 – but can find no further trace of Marjorie.

And all this is what comes of wondering who was the artist responsible for a delightful purple, white and green flyer produced something over 100 years ago.

This entry was posted on August 6, 2013, 9:43 am and is filed under Suffrage Stories. You can follow any responses to this entry through RSS 2.0. You can leave a response, or trackback from your own site.