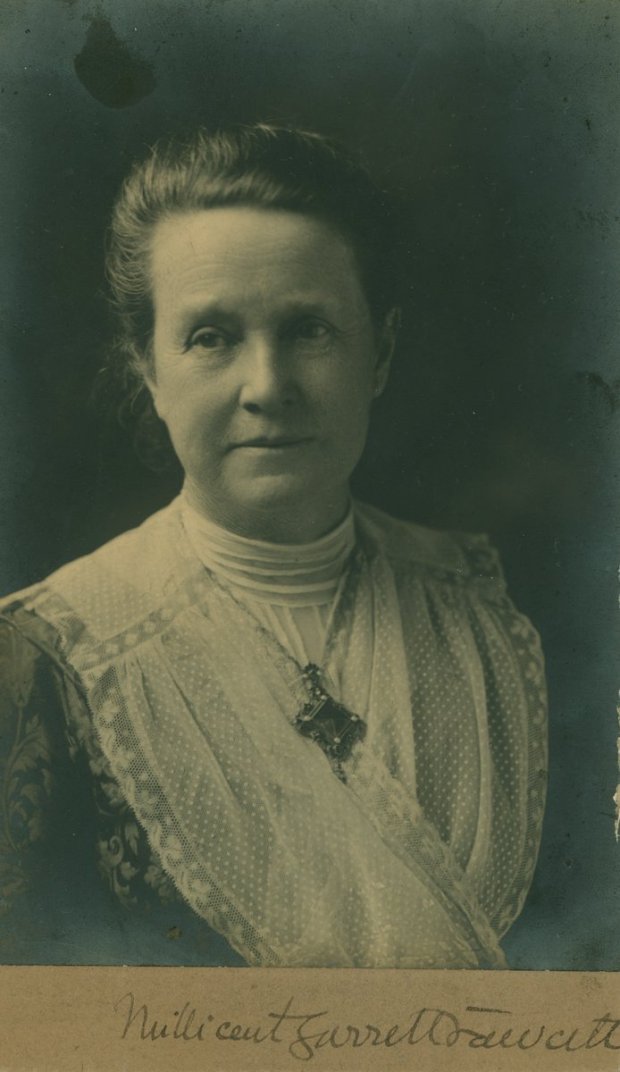 Because of copyright issues, I don’t feel able to show you the  portrait of Mrs Pankhurst that hangs in the National Portrait Gallery. But I wonder how many of you know without looking  here which one I mean?

As I thought, a great many. That is doubtless because the portrait is on permanent display.

Mrs Pankhurst’s presence is also kept before us in the shape of her statue in Victoria Tower Gardens, right next to the House of Commons.Both of these images are not where they are by chance. Immediately after her death  former suffragettes determined to memorialise their leader in this time-honoured tradition – a portrait painted for the national collection and a statue erected in a prominent and relevant position.

But what of Mrs Millicent Fawcett, whose method of campaigning for the vote for women differed from that of Mrs Pankhurst, but who was in many ways the more effective politician. Indeed, it was she who finally delivered ‘votes for women’.

Mrs Fawcett has no statue. Indeed, droll and dry woman that she was,  I’m sure she would turn in her grave if such an idea were to be mooted.

The National Portrait Gallery’s only painted portrait of Mrs Fawcett is this one by Ford Maddox Brown that depicts her as the tender young wife of Henry Fawcett, the blind politician. There is no hint in this picture of her future career. Incidentally this painting hangs, not in London, but in Bodelwydden Castle.

Tate Britain does hold this portrait of Millicent Fawcett, painted at the end of her life by her friend Annie Swynnerton. Mrs Fawcett is shown wearing academic dress, her honorary degree robes from St Andrews.

This painting is permanently in storage. It was shown at the Royal Academy in 1930 and, after being bought for the nation as a Chantrey Bequest purchase, has never been seen in public since.  When I was writing Enterprising Women  I arranged to see the painting in the Tate’s store. There was no difficulty – beyond making an appointment – in gaining access – but how very different from saying ‘hallo’ to Mrs Pankhurst every day, if one so chose, in the National Portrait Gallery.

Why can’t this portrait be brought out of storage and, if it doesn’t fit into the Tate Britain hanging policy, be transferred to the National Portrait Gallery where it would admirably complement Mrs Pankhurst?

Mrs Fawcett was not, of course, without staunch memorialising supporters. But, rather than a statue, they put their efforts into a building – Women’s Service House in Marsham Street, Westminster – and named the large hall inside for Mrs Fawcett. Financial exigency has long since separated the building from the women’s movement  (although we are thankful that it has been given a new lease of life by Westminster School). For many years Millicent Fawcett’s name was synonymous with the wonderful library that originated in Women’s Service House but was at the beginning of the 21st century given the much less resonant name of The Women’s Library.

However Mrs Fawcett’s lifelong work for the women’s cause is still commemorated in the vigorous efforts of The Fawcett Society. I am sure, sensible woman that she was, she would much rather that that was the case than that her portrait should hang in the National Portrait Gallery. And, yet, knowing how responsive the public is to the visual image, I do wish she might be allowed to share Mrs Pankhurst’s limelight.

Because it would be too ironic to devote a post to bemoaning the lack of visual representation of Mrs Fawcett, here she is, wearing an National Union of Women’s Suffrage Societies badge.

Read much more about Millicent Fawcett – and all the Garretts – in Enterprising Women: the Garretts and their circle

and when in London visit the Elizabeth Garrett Anderson Gallery.

UPDATE: And if there were to be a statue of a woman in Parliament Square (see here) to commemorate the women’s suffrage campaign, why should it not be of Millicent Fawcett?

This entry was posted on July 18, 2013, 11:00 am and is filed under Suffrage Stories. You can follow any responses to this entry through RSS 2.0. You can leave a response, or trackback from your own site.