In 1907 it was Philippa Strachey, sister of Lytton, who, as secretary of the London Society for Women’s Suffrage, organised the first large-scale London street procession of women prepared to risk ignominy by making  of themselves a public spectacle. Thus, in heavy rain, on 9 February 1907 Lady Strachey, Philippa’s mother, walked at the head of ‘The Mud March’, a soubriquet earned from the state of the streets  (see here for Kate Frye’s experiences that day). 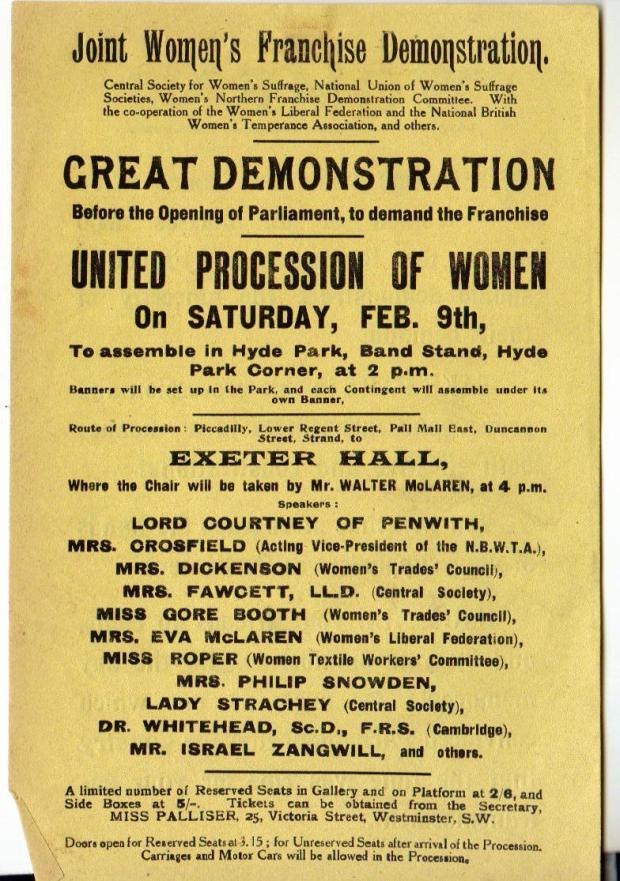 On 5 February John Maynard Keynes had written to Philippa Strachey, ‘I hear that you may want hired roughs next Saturday. If I can be of any use I am at your service after 1 o’clock’. He kept to his word and acted as chief steward at Exeter Hall in the Strand where, at the end of their march, the suffragists rallied for speeches from, among others, Lady Strachey. Keynes had long been exposed to the workings of the women’s suffrage campaign; his mother was a practical exponent of ‘women’s rights’ and his father, a close friend of Henry Fawcett, had in 1888 been auditor of the Cambridge Women’s Suffrage Association. This influence had permeated sufficiently for Keynes, in 1912, to demur at the inscription of ‘Votes for Women: IDT’ on a bas-relief by Eric Gill depicting a copulating couple, in which the woman was on top. ‘IDT’ was Gill’s way of making light of the issue as the letters stood for ‘I Don’t Think’. Keynes wanted to buy this work but only did so after Gill agreed to remove the inscription. 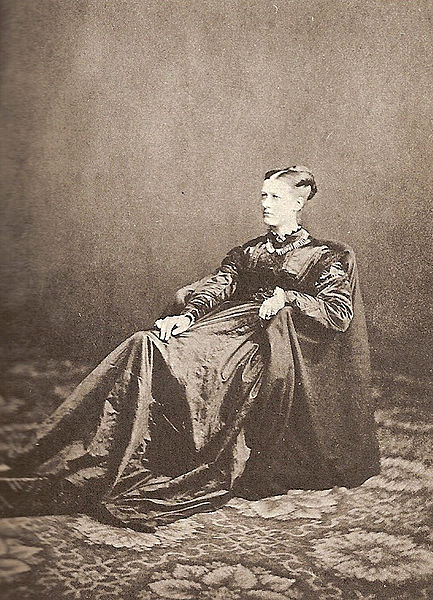 Lady Strachey had been an early supporter of the women’s suffrage campaign, having in 1867 signed one of the first petitions in favour of women’s suffrage, probably that presented by John Stuart Mill on behalf of the Edinburgh Society. From 1901 she had been a regular subscriber to the Central Society for Women’s Suffrage, as was her husband. A week after the Mud March Lady Strachey was present at Caxton Hall on the occasion of a WSPU ‘Women’s Parliament’, a meeting that ended in chaos and arrests. Elizabeth Robins, actress and suffragette, afterwards wrote to Lady Strachey, ‘I looked for you during the later evening and was very relieved that you were not to be seen, for the fact was that the police grew very violent as the hours went on…’

Lady Strachey also deployed her pen in aid of the Cause, writing, between 1907 and 1909, a number of pamphlets for the National Union of Women’s Suffrage Societies, including Reduced to the Absurd, a series of humorous syllogisms (such word-play being a Strachey speciality) and, around 1910 supplying the words for several rollicking songs, which  were published by the LSWS as Women’s Suffrage Songs. In 1909 Lady Strachey became a member of the editorial committee of a newly-founded feminist journal, The Englishwoman, which was in effect an NUWSS attempt to provide a forum for serious feminist discussion. 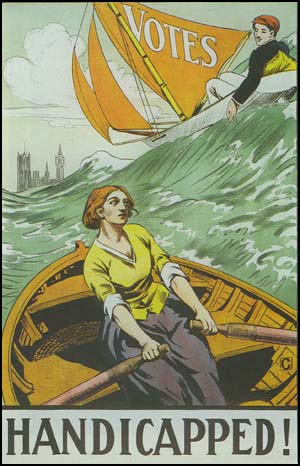 One of Lady Strachey’s co-founders of The Englishwoman was Mary Lowndes, a stained glass artist and chairman of the Artists’ Suffrage League, a society devoted to publishing suffrage propaganda. The ASL each year ran a competition for the design of a poster; Duncan Grant, nephew to Lady Strachey, was the competition’s joint winner, sharing a prize of £4, in the autumn of 1909. He had previously submitted a design, unsuccessfully, for the 1907 competition but was encouraged to try again. It may have been that a weakness in conveying the suffrage message had been responsible for his failure in 1907 because in 1909 Barbara Forbes, Lowndes’ companion and the secretary of the ASL, took the trouble to give him the subject for his design. In its final rendition the poster was described in the NUWSS weekly paper, The Common Cause, 4 November 1909, as depicting ‘a stalwart Grace Darling type struggling in the trough of a heavy sea with only a pair of sculls, while a nonchalant young man in flannels glides gaily by, with a wind inflating his saile – the vote -[treating] with good temper a subject which often causes bitterness’. The Houses of Parliament loom on the horizon as the goal of both vessels. By an interesting coincidence the winner of the ASL’s competition in 1908, with a poster ‘What’s Sauce for the Gander is Sauce for the Goose’ had been Mary Sargent Florence, whose daughter, Alix, was in 1920 to marry James Strachey, Lady Strachey’s youngest son. 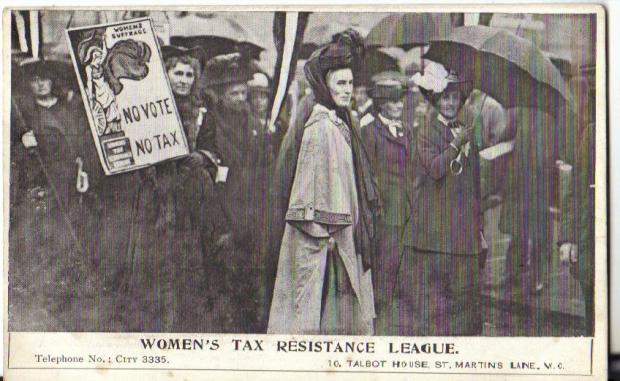 Mary Sargent Florence was a leading light of the Tax Resistance League, designing their badge and banner, and  in 1912 and 1914, putting principle into practice,  refused to pay her taxes, and had goods distrained and sold.

The next ‘ Suffrage Stories: Bloomsbury Links’  post will discuss the life and work of Ray Strachey – a Strachey-by-marriage.

This entry was posted on June 25, 2013, 11:12 am and is filed under Suffrage Stories. You can follow any responses to this entry through RSS 2.0. You can leave a response, or trackback from your own site.