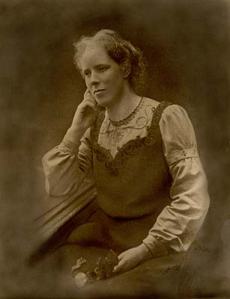 When researching the suffragette boycott of the 1911 census it is no surprise to find individuals in households – or, in the case of all-female households, all the members – refusing to give information to the enumerator.

Moreover one can discover instances of mass- evasion, such as those in Manchester and Portsmouth, which were instigated by the local WSPU organiser. It is, however,  more unusual to find that an entire institution has absented itself from the census – but that is what happened in the case of the Anstey College of Physical Education. The College occupied a large house on the long Chester Road in Edrington, on the outskirts of Birmingham. All the Chester Road houses were then unnumberd, each having its own name – such as ‘Davos, ‘Glen Mor’ or ‘Westbourne’ – and it has taken some determined hunting  but I have now managed to locate the census form issued to the College’s Principal, Rhoda Anstey. She gave no answers to the government’s questions but wrote across the form:

No Vote No Census! I protest against the injustice done to women rate-payers by the continued refusal of the government to give them the vote, and hereby refuse to fill in the census forms for my household.’ Rhoda Anstey, Principal of Anstey College. Note ‘If the Conciliation Bill passes the 3rd Reading on 5 May I undertake to give the information desired.’

On the form the Registrar noted in red ink that: ‘From the information obtained from several sources it is estimated that on the night of April 2nd 40 females slept on the premises and this number has been enumerated. ‘

Rhoda Anstey, theosophist, vegetarian and tax resister, had taken a contingent of her students to London on 19 June 1910 to take part in the grand procession organised by the WSPU in London and for the next few years actively supported the WSPU, advertising regularly in Votes for Women. Some of  the College’s former students are likely to have been members of the Gymnastic Teachers’ Suffrage Society which had been founded in 1908. I presume that the 40 females enumerated on the night of 2 April included students at the College; I wonder if Miss Anstey enquired as to whether or not they wished to be enumerated?

For further information about Rhoda Anstey and her College click here.

This entry was posted on April 2, 2013, 8:09 am and is filed under 1911 Census, Suffrage Stories. You can follow any responses to this entry through RSS 2.0. You can leave a response, or trackback from your own site.