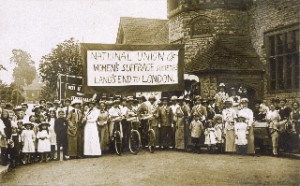 NUWSS South-West branch of the Pilgrimage photographed in 1913

In the summer of 1913, in the aftermath of Emily Wilding Davison’s spectacular funeral procession,  while  WSPU members were reading in the pages of The Suffragette details of Mrs Pankhurst’s successive hunger strikes, numerous reports of increasingly dangerous suffragette militancy, and  Christabel Pankhurst’s denunciation of prostitution and venereal disease (eventually published as The Great Scourge), the constitutional suffragists, the National Union of Women’s Suffrage Societies, were planning a ‘Woman’s Suffrage Pilgrimage’.

The Pilgrimage was intended to act as  a counter to suffragette militancy, to create a spectacle demonstrating that women, while disciplined, were also law-abiding. The air of spirituality that had surrounded Emily Davison’s coffin was paralleled  by the consciousness-raising intent of the Pilgrimage. It is interesting to note that the model, which had been enacted the previous autumn when a small group of women had journeyed from Edinburgh to London, was known as the ‘Women’s March’. By mid-1913 the mood had changed – the women were no longer marchers, they were pilgrims.

In my Women’s Suffrage Movement: a reference guide  I give an account of the various strands of the Pilgrimage, which, beginning at various distant points in England, approached London along eight main routes.

Now, to mark the centenary of the Pilgrimage, the Dreadnought South West Association is planning to tour a new play, ‘Oxygen’, playing at many of the stopping places of the south-west route of the Pilgrimage, which began at Land’s End on 19 June. One of those involved in planning the Pilgrimage commemoration is Dr Julia Neville, details of whose latest book are given below. 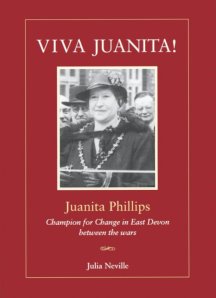 Viva Juanita:
Juanita Phillips: Champion for Change in East Devon between the wars
by Julia Neville

‘”Juanita Maxwell Phillips, OBE (1880 – 1966) was eleven times Mayor of Honiton, Alderman and Freeman of the Borough, Devon County Councillor and County Alderman, JP and OBE. Her extraordinary story – from Chile to Honiton, from suffragette to pillar of the establishment, from amateur dramatics to theatre impresario – was uncovered in 2009 by the Senior Council for Honiton. It was brought to life in Honiton in newspaper articles, presentations, commemorative events, and a Honiton Players production, Viva Juanita! Now this fascinating illustrated book tells her story in words and pictures.”

For details of how to buy Viva Juanita see here

While being generally interested in NUWSS activities, I have an interest slightly more personal  in the Devon  branch because for some years before 1913, its secretary was Miss Jessie Montgomery, who was also a mover in establishing the college that eventually became Exeter University. When I arrived as a student I was among the first intake at a hall of residence that went by what seemed the rather cumbersome name of ‘Jessie Montgomery House’. We were never told who this Jessie Montgomery was – or had been – and I must say I never inquired – although I do remember being rather pleased when I could give her some reality, after coming across a commemorative plaque to her in Exeter Cathedral. Anyway, Miss Montgomery is now once more history –  I see that ‘her’ hall of residence, along with others on that campus, have now been demolished.  Sic transit…

This entry was posted on March 26, 2013, 11:25 am and is filed under Suffrage Stories. You can follow any responses to this entry through RSS 2.0. You can leave a response, or trackback from your own site.