Another extract from Kate Frye’s manuscript diary. An edited edition of later entries (from 1911), recording her work as a suffrage organiser, is published as Campaigning for the Vote: Kate Parry Frye’s suffrage diary.

Working for women’s suffrage involved taking part in many different kinds of social activities. In the first month of 1908 Kate danced, stewarded and was lectured by Ford Madox Hueffer – all in the suffrage cause. 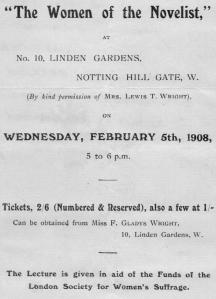 The flyer produced – presumably by the Wrights – for the lecture that Ford Madox Hueffer gave in their house. I wonder if the error in the spelling of his middle name was pointed out to them?

Dramatis personae for these entries:

‘Mrs Wright and the girls’: Mrs Lewis Wright and her daughters, Alexandra and Gladys, who then lived at 10 Linden Gardens. It was under their influence that Kate had joined the London Society for Women’s Suffrage, a constitutional suffrage society.

Geoffrey Stanger: the son of H.Y. Stanger, Liberal MP for North Kensington, who had introduced a women’s suffrage bill into the House of Commons.

I sat over the fire and had another little rest and got dressed early in my white satin dress. It is pretty – a charming frock – the nicest I have ever had, it seems to me. I did my hair Greek fashion with a silver and turquoise band round it which I have made myself – and though it’s me what says it and shouldn’t ‘I did look nice’. Even Mother said I did, I heard after from Agnes. Agnes’s dress was pretty too. And Mother has made hers beautifully but it hadn’t on a trace of style and she really did not look very nice……We had a private omnibus to the Grafton Galleries and got there about 9.15. Met Mrs Wright and her party just inside but by the time our four men had helped themselves we hadn’t many dances left. The girls introduced me to a few but I thought theirs rather a scratch lot – one boy wasn’t bad and Geoffrey Stanger, but one or two others I had I lost as soon as possible. It was a great pack – too many people for dancing in comfort somewhere about 300 and they have made for the London Society of Women’s Suffrage about £70…We stayed to the bitter end and I danced every dance except a few extra at supper time .. I learnt to do the Two Step with Mr Stanger and loved it. We reached home at 3.20 and were able to stir the fire into a blaze. John went off before 4 o’clock but we four sat over the fire talking till 4.30 and it was 5 o’clock before I was in bed as I always like to put some of my things away and tidy the room.

Changed at 6.30 and Agnes and I went off at 7.30 to Miss Mason’s (9 Hyde Park Place) for a Drawing-room Suffrage Meeting at which we had promised to Steward and get there at 8 o’clock for 8.30. We started to walk but we were all in our best and it started to drizzle and we took a cab from the top of the hill. The speakers were the Hon Bertrand Russell, Mr Mitchell Morton and Miss Frances Sterling. She made a most excellent speech and it was a most successful meeting. We did much good work in the way of getting members for the Society and it was all most encouraging and enthusiastic. They had a meeting here last night too – 70 people – but Alexandra said they were a most cold unenthusiastic audience – they could not do anything with them. She has paid Agnes and me a great compliment in saying ‘ I always like to see Agnes and you come into a room – then I know the thing will “go”’. I suppose we have a lot of personality and a lot of electrical excitement and it does help. John is quite in the movement now – though still apt to go back on us in the society of his own sex. .. These meetings are so exciting. I never feel like settling off after them.

Changed after tea and at 5.30 Agnes and I went by motor bus from Notting Hill Gate to Oxford Circus and to the Queen’s Hall for the Liberal Federation Woman’s Suffrage Meeting. As we had been asked to act as Stewards and had to be there at 6 o’clock. We stewarded up in the Balcony but there was very little to be done. A good meeting, but not very full. But the audience was a very enthusiastic one and the speeches went well. Mrs Eva McLaren in the chair. Miss Balgarnie, Mrs Conybeare, Mrs Booth and the usual Liberal Women’s Federation people. It was a meeting for women only but there were a number of men stewards. The doors were opened at 7 o’clock and it commenced at 8 o’clock. Mother was there and we met at Oxford Circus and the three of us came home together by bus.

They had quite a dozen awful Hampstead females there [at home] so we slipped quietly away and hurried to Notting Hill Gate so as to be at the Wrights (10 Linden Gardens) punctually at 4.45. Gladys had asked us to help them  I stood in the hall and looked at tickets and sold others etc and later went up to hear the lecture from 5 to 6 by Mr Ford Maddox [sic] Heuffer on the Women of the Classical Novelist of England. It was most interesting and a breezy discussion followed. We got in at 6.30 .. I was very tired but I worked till 11 o’clock directing envelopes for the South Kensington Committee of the L.S.W.S. for a meeting to be held at the Town Hall on the 25th inst.

This entry was posted on September 19, 2012, 2:42 pm and is filed under Kate Frye's suffrage diary. You can follow any responses to this entry through RSS 2.0. You can leave a response, or trackback from your own site.