Collecting Suffrage: The Game of ‘Suffragette’

I will shortly be issuing a new book and ephemera catalogue – number 175. It will comprise books and ephemera by and about women – with special sections on Women’s Suffrage and Women in the First World War. If you would like a copy of the printed or email version please let me know. A short time after these have been sent out, I shall post the catalogue on this website. 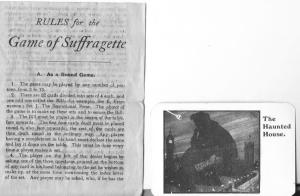 The Rules of the Game. ‘The Haunted House’ appears on the reverse of every card

Amongst several rare items that I shall be including in the ‘Women’s Suffrage’ section is ‘The Game of “Suffragette”‘.

This card game was  invented by the Kensington branch of the WSPU, probably in the late summer of 1907, and, as such, is, I think, the earliest of the games that were marketed as a tool of suffragette propaganda. It was described in the second issue of ‘Votes for Women’, November 1907.

The first issue of ‘Votes for Women’, October 1907, had on its cover the picture of the ‘Haunted House’ by David Wilson, which had first appeared in the ‘Daily Chronicle’ in April 1907. Depicting a seated woman brooding over the Houses of Parliament, a demand for ‘Votes for Women’ in her hand, this image appears on the reverse of every card in this game – and on the base of the box.  David Wilson (1873-1935)  was an Irish-born illustrator, soon to become chief cartoonist for ‘The Graphic’. 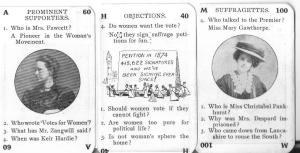 The game comprises 54 cards (all present) divided into 13 sets of 4 cards each – one of the odd ones being known as ‘The Bill’ – and the other a spare which has been used to record the score of a game played long ago by 6 people, designated by their initials. All the sets have names: eg. Prominent Supporters, Arguments, Freewomen, Voteless Women etc – and each card poses a series of questions. Some of the cards also carry photographs – of Christabel Pankhurst, Annie Kenney, Mrs Fawcett, Elizabeth Robins, Israel Zangwill, and Mary Gawthorpe.

Along with the cards – and the original box – is the original, all-important, set of rules. These describe in detail the various ways in which the game can be played – it seems very inventive.

This is an incredibly scarce item. Although I wrote of it in The Women’s Suffrage Movement: a reference guide, this is the first set I have ever seen.  An amazing survival.

This entry was posted on September 17, 2012, 9:45 am and is filed under Collecting Suffrage. You can follow any responses to this entry through RSS 2.0. You can leave a response, or trackback from your own site.