Suffrage Stories: The 1911 Census: A Liverpool Boycott – Or John Burns Meets His Waterloo

Posted by womanandhersphere in 1911 Census, Suffrage Stories on December 5, 2013

As I have explained in previous posts, the militant suffrage societies, the Women’s Freedom League and the Women’s Social and Political Union, laid plans to boycott the 1911 census. They urged individual supporters to either refuse to complete their census form or to evade the enumerator by absenting themselves from home on census night. In order to provide shelter for such evaders some women offered ‘open house’ for Census Night.

One such woman was a Liverpool woman, Mrs Florence Hall, who, as Votes for Women reported in its 31 March 1911 issue, ‘would be opening her house – Glenamour, The Park, Waterloo, to Census Resisters’.

Scene of the Waterloo 1911 census boycott (courtesy of Rightmove website)

And that is what she did. The head of the household, Joseph Albert Hall, was at home on Census Night  but took part in the boycott, giving no details of his family and leaving the form unsigned.

The census form for ‘Glenamour’ was completed by the Enumerator who noted those present that night as: Joseph Albert Hall, 50 and his wife Florence N Hall, 45, and a daughter, also Florence N. Hall, 14,  together with 2 anonymous men and 9 anonymous women.

Florence Hall had written across the Census Form:

‘No Vote No Census. House full of evading & resisting suffragettes & male supporters of whom I decline to make any return or give any particulars’

The house, which still carries the name ‘Glenamour’ (now 65 Park Road, Waterloo) was – and is – a large, semi-detached house . On the Form the Enumerator set the number of s rooms (for the purpose of the Census) at 10 (unsurpisingly, it is now divided into flats).

The boycott of the census was by no means the only active contribution that Joseph and Florence Hall made to the ‘Votes for Women’ campaign –  I think we can take it as read that they were members of the Tax Resistance League. 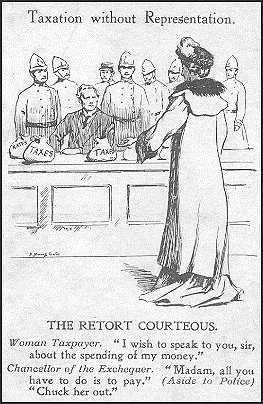 The Women’s Freedom League paper,  The Vote, reported in its 9 November 1912 issue, that:

‘The goods of Mr. J.A. Hall, of “Glenamour,” on October 31, Waterloo-park, Lancashire, were sold for the second time  the first time had been in 1911] against distraint consequent on his refusal to pay income-tax on house property belonging to his wife. The goods were bought in by a friend for the amount of the tax and expenses.

Mrs. Hall, who attended the sale in the unavoidable absence of her husband, explained — by the courtesy of the auctioneer — to the large company of sympathisers present that this action was taken as the most practical and emphatic protest possible against the stupid and unjust action of the Revenue authorities who, despite the fact of the Married Woman’s Property Act under which she herself is liable for her own debts, had forced the issue under the Income Tax Act of 1842. This Act, whilst making the husband liable for the payment of any tax on his wife’s own income, leaves him absolutely without any power to obtain from her any information with regard to her income if she declines to disclose it.

Mrs. Hall emphasised the absurdity and unfairness of such an enactment, and said it was a matter for considerable surprise that, quite apart from the merits of the woman’s question, men had not bestirred themselves to force the Government to remedy this utterly impossible state of things and make women, if they could, pay this or any other tax whilst withholding from them the Parliamentary vote.’

It hasn’t been easy to find out much more about the Halls. I think Florence’s maiden name was ‘Nightingale’ – it’s rather startling just how many female ‘Nightingale’ children around the time of her birth – 1868 – were still being named for the heroine of the Crimea. Joseph Hall was born in Liverpool, the son of a cooper, and seems to have worked in export sales. The couple had been over to the US for some time at the end of the 19th century, returning in 1898. By that time they had one daughter (who may have been the one given the name ‘Florence’ on the census form, but whose real name was ‘Marjorie’). In 1901 the Halls were living in Leytonstone, now with a new-born son, Harold, who may have been one of the anonymous males enumerated ten years later in ‘Glenamour’.

The Halls  returned to the US in October 1913, but must have returned to Britain because I next come across them in 1921, travelling over to Los Angeles with Harold, who is now an engineer. By 1927 the Halls have quit these shores for good and are permanent residents in the US, living in Glen Avenue, Port Chester, Westchester Co, New York – which Street View shows me looks rather agreeable.