Posted by womanandhersphere in Collecting Suffrage, Suffrage Stories on August 27, 2012 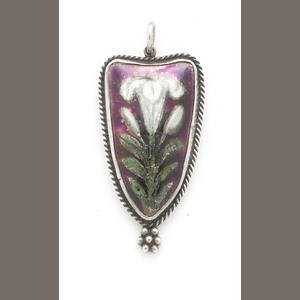 Pendant made for Margaret Murphy by Ernestine Mills

In previous posts I have mentioned how necessary it is to observe the provenance of an item of jewellery in order to be able to label it with certainty as ‘suffrage’. In that way the collector is less likely of  falling into the trap of buying an item – vaguely Edwardian with vaguely purple, white and green stones – that an auction house or dealer has chosen to label ‘suffragette’  In this post I will bring to your attention three items of jewellery – made for two Dublin sisters – that are indisputably ‘suffrage’.

‘Margaret’ and ‘Jane Murphy’ were the pseudonyms of two middle-class women from Dublin – whose real names were Leila (b. 1887) and Rosalind Cadiz (b. 1886). They were members of the Irish Women’s Franchise League. They both took part in the window-smashing campaign in London in March 1912 and were sentenced to two months in Holloway. They went on hunger strike (c 16 April) and were forcibly fed. They were released c 15 May. The pendant above is engraved – “Holloway Prison No. 15474, Maggie Murphy, 2 months hard Labour, E.4 Cell.12., Hunger Strike 16th April 1912, Forcibly Fed – and was made by the suffragist and enameller, Ernestine Mills. As you can see the lily motif is rendered in purple, white and green – in this case a ‘true’ use of the colours.

A couple of months later the Murphy sisters took part in the first window-smashing campaign in Dublin and were again sentenced to two months’ imprisonment – but in Dublin they were given the status of political prisoners.

Margaret Murphy requested to be treated by her own doctor, Kathleen Maguire, ‘as I am undergoing treatment owing to having been forcibly fed in Holloway,… Dr Maguire understands my constitution.’ To this the Medical Officer in Mountjoy replied (5 July 1912) ‘I beg to report that I regard her [Margaret Murphy] as a woman of neurotic temperament who suffers from indigestion, an ailment frequently complained of by women of this type.’

The Murphys eventually succeeded in not only getting a suffragist doctor, Kathleen Maguire, to treat them, but also in getting their own dentist. ‘Miss Jane Murphy will attend her own dentist at her own expense’ (July 1912).

The Murphys clearly had a way about them for ‘with reference to Margaret Murphy’s complaints of the possible effect of the whitewashed walls of her cell on her eyes, the governor agreed to have the walls recoloured, and to have a new gas burner fitted in lieu of the existing one, and her request for a special kind of disinfectant to be used in her cell was referred to the Medical Officer.’ 25 July 1912 Minutes of Mountjoy Prison.

Finally the sisters went on hunger strike for the last 92 hours of their sentence (along with 2 other Irish suffragettes) in sympathy with three English suffragettes (Mary Leigh, Gladys Evans and Jennie Baines) who had received harsh prison sentences in Dublin and who had not been given political prisoner status. The Murphys were not forcibly fed – the end of their sentence arriving before this became necessary. They were released, together, from Mountjoy Prison on 19 August, welcomed by members of the Irish Women’s Franchise League.

Here are the pendants that the sisters either commissioned for themselves or, more likely, with which they were presented after their release. Each pendant is of shield shape, surmounted by a green enamelled shamrock, hallmarked Dublin, Hopper and Hannay, 1912. One is engraved on the obverse “From Prison to Citizenship” and on reverse “J. Murphy 20.6.12 to 19.8.12” and the other “M. Murphy 20.6.12 to 19.8.12”. Thus do three items of jewellery commemorate the efforts of two Irish sisters to win ‘Votes for Women’.