Mariana Starke: Toxophilia – And Then To Italy, 1791

Posted by womanandhersphere in Mariana Starke on June 26, 2014

1791 was a most important year in the life of Mariana Starke.

We last met her in January of that year when, with her friend and patron, Mrs Crespigny, she attended her play, The Widow of Malabar,  on the first night of its second season at the Theatre Royal Covent Garden.

Mrs Crespigny’s diary reveals that during the next few months she and Mariana met frequently – sometimes in Camberwell and sometimes in Epsom. Among their circle were the family of Henry Martin, who had become Comptroller of the Navy in 1790 and the news of whose baronetage Mrs Crespigny noted in her diary on 21 June 1791.

The Martins had at one time lived at Ashtead, a short distance down the Dorking Road from the Starkes’ Hylands House, but were probably now resident at Little Farm, near Tooting. ‘Miss Martin’ – presumably the eldest of his four daughters – was frequently included in parties to the theatre and opera and Mrs Crespigny mentions dining with Mrs Martin, together with Mariana, on 4 April, a day she described as ‘the first shooting day at Epsom’.

Mrs Crespigny’s diary relates that she and Mariana next met in Camberwell on 2 May – when they were joined by ‘Thomas on his matrimonial business’. This ‘Thomas’, I am sure, refers to the Rev Joseph Thomas for, on 6 May, ‘Miss Parkhurst dined and slept here’. Mellicent Parkhurst, Mariana’s very close friend and co-author, was soon to marry the Rev Thomas. I cannot, though, explain why the Rev Thomas was discussing ‘matrimonial business’ – apparently in Mellicent’s absence – with the inhabitants of Grove House. On 7 May, after dinner, Mariana and Mellicent returned to Epsom.

Mariana was back at Grove House on 24 May and on the 25th Mrs Crespigny notes that she ‘gave my first archery party’. Mrs Crespigny was a keen archer – for excellent articles about this aspect of her life see  A toxophilite – Mary de Crespigny née Clarke (1749 – 1812) and, for another much older article, here. 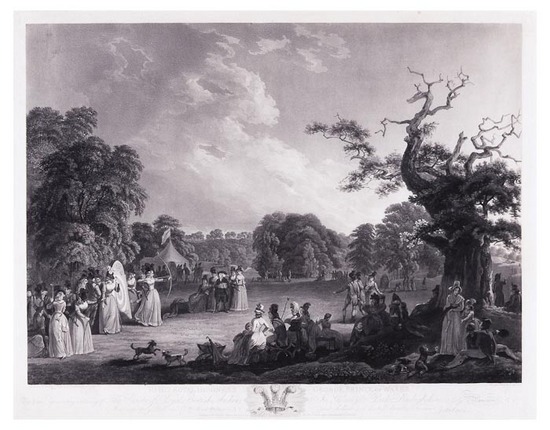 After John Emes & Robert Smirke To His Royal Highness George Prince of Wales This Plate representing a Meeting of The Society of Royal British Archers in Gwersyllt Park, Denbighshire, aquatint by Cornelis Apostool, [Siltzer p.335], 1794, John Emes. The scene illustrates the popularity of the Royal British Archers, or Royal Toxophilite Society, amongst women (albeit only of a high social standing) as one of the few sports in which they compete at all, let alone on equal terms. The original painting is in the British Museum, the landscape being the work of Robert Emes, who also published the print, while the figures were painted by Robert Smirke. Retrieved from http://www.bloomsburyauctions.com/detail/13420/1154.0. Image and caption courtesy of A toxophilite – Mary de Crespigny née Clarke (1749 – 1812) see http://ayfamilyhistory.blogspot.co.uk/

Mariana was at Grove House to enjoy that first archery party and on Friday 27 May accompanied Mrs Crespigny to Blackheath.  This day, the diary records, was ‘The great anniversary of the archers at Blackheath. We all went  – in my uniform. Miss Starke went home afterwards.’ Anecdotes of Archery describes that ‘grand meeting’ on Blackheath, which was attended by a good number of ‘Societies of Archers’, including such groups as the Surrey Bowmen, the Kentish Bowmen and the Woodmen of Arden. The report also records that ‘Numbers of women were likewise dressed in the uniforms of the societies.’ I am sure Mariana would have very much enjoyed donning a uniform. Did she draw a bow?

On Monday 21 August Mrs Crespigny spent the night at Hylands House after a day of archery in the course of which she presented the Surrey Bowmen with a silver arrow as a prize for a competition.

On  19 September 1791 Mrs Crespigny met Mariana in town. Although she makes no entry in clear script, surely both she and Mariana were in attendance three days later at St Martin’s Church in Epsom when, on 22 September, Mellicent Parkhurst married the Rev Thomas? The Rev Jonathan Boucher conducted the ceremony and the witnesses were Mellicent’s father, John Parkhurst, and her half-sister, Susanna Altham. I note that in the entry in the parish register the Rev Joseph Thomas is described as ‘of Camberwell’ – which may explain why he was discussing wedding plans in Grove House a few months earlier. I mention that Mrs Crespigny made no entry in clear script because large sections of her diary are written in shorthand and I haven’t checked whether there is such any such passage for that date.

Mrs Crespigny saw Mariana on several occasions in October. On 17th she slept at Hylands House after attending an archery match at Epsom and on the 22nd Mrs Starke, Mariana and Louisa arrived at Grove House for a short visit.

However, the atmosphere over these few days seems to have been less than calm. On  23rd October Mariana and Mary Crespigny had words -though quite what it was about is difficult now to ascertain. The diary entry appears to read ‘Miss S was very unkind to me relative to the grog and the Bow  – and said things that hurt me. I was very ill in consequence.’

The following day, Monday 24 October, Mrs Crespigny records that she ‘Had a sad day with the distress of Mr Browning  & Miss Louisa’ This may, perhaps, be explained by the next-day’s entry –  ‘Wednesday 25 October Mr & Mrs Starke & Misses Starke  & Scott, who I parted with to oblige them, set off for Nice.

”Scott’ was a woman, a maid or nurse, who until now had been in Mrs Crespigny’s employ and to whom, on her departure with the Starkes, she gave a guinea. That the Starke family was setting out for the south of France late in the autumn and despite the state of turmoil in that country would indicate that the state of health of Louisa Starke certainly – and probably also both her mother and father – had become increasingly critical. All were suffering from tuberculosis.

As early as 1779/1780 Mrs Starke, discussing her ill-health in a letter to Mrs William Hayley, had commented that ‘an hour’s talking would produce a spitting of blood’. In an April 1781 letter to William Hayley Mariana mentioned that they had been staying at Brighthelmstone for the previous two months on account of her mother’s health. The sea air was, of course, considered efficacious for pulmonary complaints. In a letter of 1787 or 1788 Mrs Starke mentioned that she and Louisa had spent a few weeks at Brighthelmstone, leaving her husband and Mariana at Hylands House.

In the Introduction to the 1815 edition of Letters from Italy (which is the one I have to hand) Mariana writes that she hopes the work will be of use ‘to those of my compatriots who, in consequence of pulmonary complaints, are compelled to exchange their native soil for the renovating sun of Italy’ and mentions that her observations on health are ‘the result of seven years’ experience; during which period my time and thoughts were chiefly occupied by endeavours to mitigate the sufferings of those most dear to me.’ Alas, little of the time abroad was devoted to nursing her sister Louisa, who, aged just 20, died at Nice on 18 April 1792, barely six months after leaving England. Had Mrs Crespigny’s comment on 24 October 1791 about ‘the distress of Mr Browning and Miss Louisa’ been a comment on a romance thwarted by her illness?

Having buried Louisa in Nice the Starke party – which Mariana describes in Letters from Italy as four in number (comprising, presumably, herself, her mother and father and ‘Scott’)- set out for Italy. In Letter 1, dated Nice, September 1792, Mariana writes that they undertook the journey over the Alps to Turin at the end of May.

On 3 November 1791 Mrs de Crespigny had noted in her diary that Mr and Mrs Starke and party had arrived at Calais and on 3 December that she had received ‘letters from Lyons’. Were those from Mariana?

I wondered briefly if Mrs Crespigny could have been the recipient of the originals of the Letters on which Mariana eventually based her book? It is the kind of role a close friend and patroness might fulfil but I must swiftly state that I have seen no evidence whatsoever to suggest that this was so. Indeed, perhaps rather surprisingly, I have come across no mention of Mrs Crespigny in any of Mariana’s manuscript letters that I have read.

The dedication in the 1815 edition of Letters from Italy is to Mellicent Thomas ‘as a small testimony of gratitude for her great kindness in having corrected th epress, and aided, by her deep and extensive classical knowledge, the labours of The Author’. Mariana would surely have acknowledged any specific interest taken in her work by the woman to whom she had made such a fulsome dedication in The Poor Soldier.

However, it is Mrs Crespigny we must thank (or at least those of us who follow the life of Mariana Starke in intimate detail must thank) for alerting us to the exact date when the Starkes’ coach swept out of the gates of Hylands House, taking Mariana to Italy and her destiny.